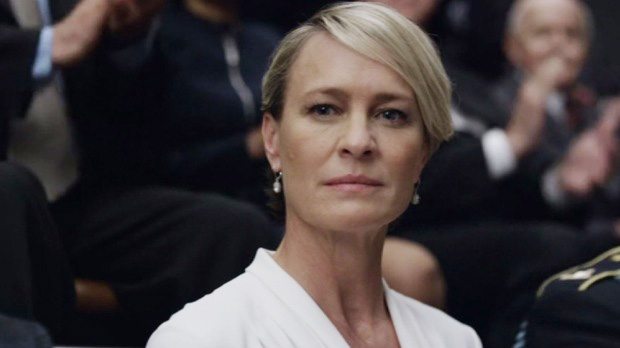 How do you get back at your “House of Cards” POS son-in-law that now runs the most powerful nation in the world? Give money to the enemy campaign. That’s Claire’s mom’s plan anyway.

Mrs. Hale is busy getting her rich tea club friends on board with Dunbar as well.

The money has to be kept secret, but we all know how that’s gonna go with Team Francis always sniffing out key intel.

Claire plans to divert money to Doris Jones for the cancer center behind the back of the Prez by using Jackie Sharp. Good plan. But….tough to hide things from POTUS as I just stated.

Jackie plays along, but Leann Harvey wants to make sure, so she hires a guy to take pics of Jackie and her lover Remy. Leann knows how to play the game even though she’s new to this crowd.

She’ll need every trick in the book to survive these sharks, though.

Claire is left a welcome back note by her husband as she returns to the White House to attend the State of the Union Address later that night. Frank leaves her some earrings to wear that belonged to his mother. Very expensive ones that she must have stolen.

Our old Russian buddy Viktor Petrov is still at it, and I wouldn’t be surprised if this series ends with him blowing up the planet over some nonsense. He’s learned of a coup led by several Russian billionaires, so he begins systematically killing them. One prominent billionaire escapes and heads to America for asylum.

Frank doesn’t give one tiny shit about this wealthy Russian, Igor Milkin, and wants to send him back to Petrov.

“He tried to slay the dragon and missed,” Frank says. So Milkin is on his own according to POTUS.

Before the SOTU address, Frank gets a call from Doris Jones, which does not bode well for Claire. The presidential couple looks like their agreeing to a divorce settlement as they check off items agreeable to each other for the night of the speech.

Make lots of friends on the way up the ladder. They will be very useful once you’re at the top. Even against your own wife.

After the call from the cagey veteran Congresswoman, Frank takes a pen to his speech and starts slashing. 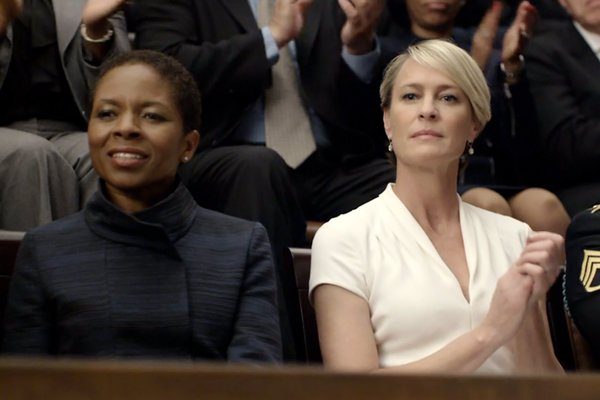 Claire attends the State of the Union seated beside Celia Jones. The First Lady has ignored the advice of her mother and wears all white, a sharp contrast to everyone else in attendance.

We see a meeting between Remy Danton, who is out of the game, and Leann. He connects the dots on the money for the cancer clinic, but is bushwhacked by Leann’s knowledge about his “fingerprints all over Jackie.” Keep in mind Jackie is married, even though the marriage was mainly to help her in her campaign in season 3.

The SOTU address was super realistic looking. These real life speeches are pretty awful usually, as the Prez gets standing ovations as his empty words fill the room filled with dirty dealing politicians.

Frank’s speech was a rousing success. For him anyways.

He started off on a high note about his wife’s help with the Russians last season. There would be no more positives for the First Lady after that tip of the hat. She had the rug yanked out from under her ass.

Frank made Doris Jones the focal point of his speech. Said her hard work was the example the rest of D.C. had to follow in order to get America back on track. He then talks about the cancer center and says he is going to fund the project for her since she’s been working on the project for over a decade.

With a few words, the Prez has ended his wife’s campaign in Texas before it even began. And Claire had to smile and applaud his sabotage.

Frank is pure evil…but so is Claire so….

Remy is scared to see Jackie now that he knows the secret could be let loose by Leann if she needed to hurt Jackie. So he takes a little road trip. 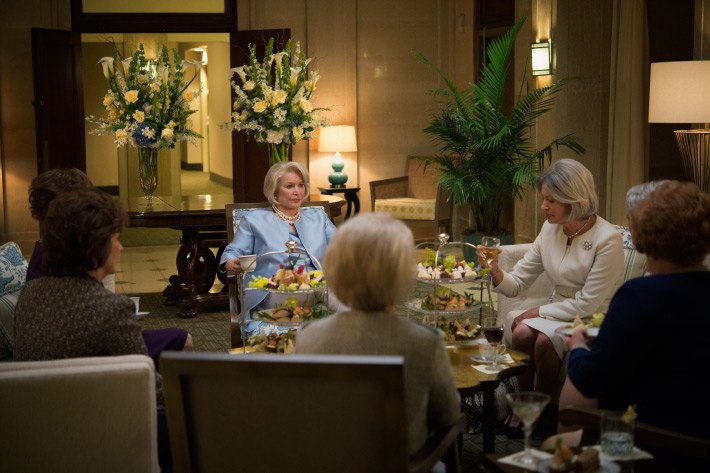 Seeing Doris gloat in the face of Claire as the First Lady was forced to return to the White House was awesome…and a bit disgusting. These people have to be polite even when they know they’ve screwed the other over.

Frank makes it clear to Claire that he won’t allow her to become dangerous, pointing out that her pathetic campaign would never have worked out even with no interference from him.

He says she can run for Senate once everything settles down on the Presidential front. Makes sense. Unless he loses the race for the White House.

Frank talks to us viewers, telling the story of the boy who used to run away from home and end up at his family home as a kid. Frank said the boy climbed a tree and stayed there for a full day and night. Young Frank took an ax to the tree to show the boy how life really was at his terrible home, and the boy took off and never came back.

The story showed that he could make things much worse for his wife if she didn’t start appreciating how great her life is with him.

As Frank’s feeling good about his moves on Claire, he gets bad news on the Russian front. The paranoid Petrov thinks Frank’s administration helped orchestrate the coup!

I’m telling you, Petrov will blow up the planet on the series finale if he’s not assassinated before he gets the chance.

The loving Claire with her sick mom at the end of episode one is gone. She threatens to sell the family home out from under her mama!

She needs the money to pay Leann’s outrageous consulting fees. Claire is a shark with tunnel vision. She will go through any and everyone to get what she wants.

Elizabeth Hale tells her daughter that she’s such a disappointment during this little debate over money.

Mom’s not the nicest person either!

Great way to end this episode. A good reminder that these people are about as uncaring as humanly possible. Forget the tears from the First Lady in the season premiere.

On to episode 3 to see who can top Claire’s wickedness.