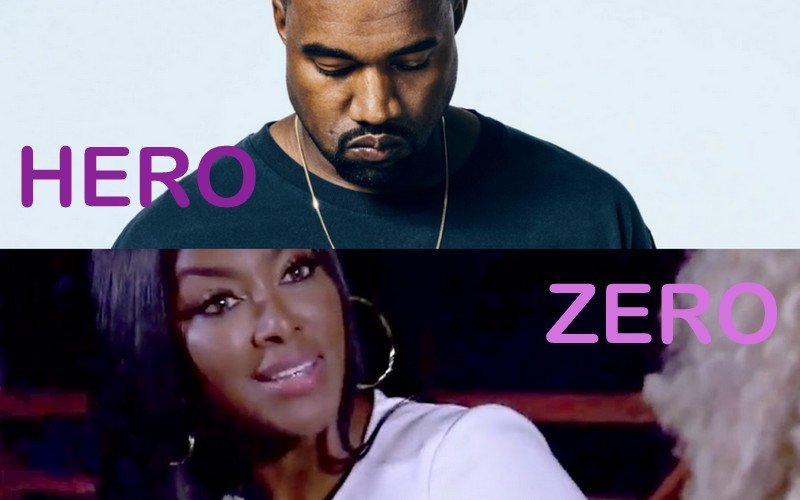 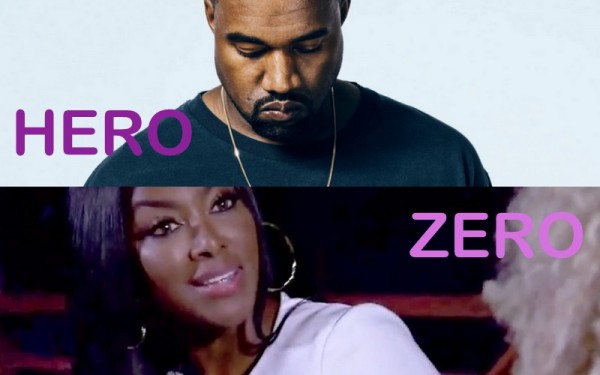 This week’s hero is a rapper who served up some meaty beef courtesy of Twitter fingers and the zero is an Atlanta “housewife” who is all over the place. 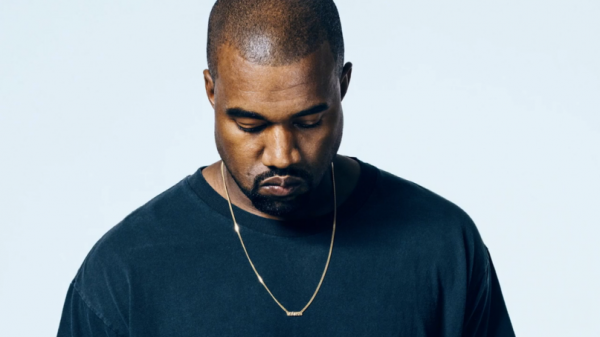 Okay so I know some people wouldn’t consider his twitter beef with Wiz Khalifa and Amber Rose heroic, but Kanye West is this week’s hero because regardless of folks say, his responses to Wiz Khalifa, in particular, are golden.

I have a love/ hate relationship with Yezzus because, on the one hand, he’s so damn cocky that you want to throw shade, but on the other hand, he’s kind of a musical genius, so his arrogance is warranted.

During his back and forth with the Pittsburgh rapper, he carried him. No matter what people think, no matter how much social media made and make fun of his retorts (“I’m your OG and will be respected as such”) Kanye gave Wiz and all of us a lesson on respect. In that, you don’t let anyone come for you.

I don’t know about you, but I got a kick out of his jabs at Wiz because truth be told, Kanye, in all his self-indulgence, is dope and Wiz cannot hold a candle to him as an artist. He fired off all the reasons why Wiz should stay in his lane and even with his “greatest of all time” self-proclamation, his points are valid because they are true.

Now, am I here for his bashing of Amber Rose? Hell no because come on Kanye, you married Kim KARDASHIAN! But aside from his clear ignorance of the fact that he put a ring on the finger of a woman who’s reputation rivals that of the ex he continually slut shames, he trolled Wiz in epic fashion. He trolled him like a G. In fact, like an OG.

Kanye West’s clap back game, numbered all the way to 17 reasons why no one should ever come for him, makes Ye my hero. 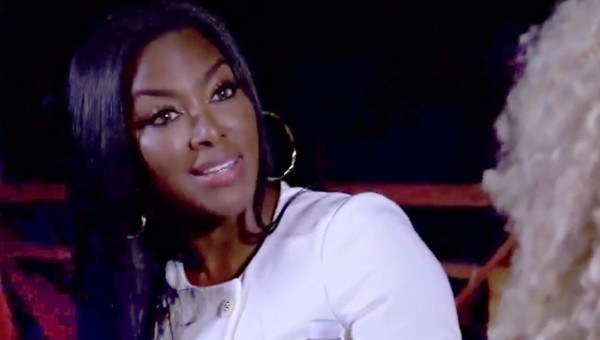 There comes a point in life where you have to see yourself for who you are and not live in the delusional state of mind that you have created. Kenya Moore is this week’s zero because the way she flipped out Kim Fields on the most recent episode of the Real Housewives of Atlanta is totally out of line and prove that she is on a plane of unbelievable delusion.

Let’s face it, Kenya is not very talented. I mean she is beautiful and was Miss America… 23 years ago.. but outside of that, there’s really nothing to write home about when it comes to her. Sometimes, when you have gotten by on your looks so much, you don’t have the opportunity to use skills and abilities that don’t involve the flash of a smile or the fit of a dress. That’s where Kenya is right now, and it is not a good look for the former beauty queen.

She has yet to learn that the world does not owe her anything. Kenya also doesn’t know how to deal with things not going her way. She told Cynthia, her “friend,” that she will not be participating in any way with her commercial in Jamaica because she feels like she didn’t give her a chance to present her idea and was assed out by Kim Fields. But we all know what actually happened- she didn’t show up for the meeting. Why should Cynthia accommodate her when it’s Bailey Eyewear that Kenya is trying to work with?

That’s the thing with Ms. Moore- she doesn’t take responsibility for her actions. It’s like she doesn’t see what she does in situations nor does she understand that many times, the responses she gets from those around her are reactions to her behavior. That point really boiled over with Kim this week. Kenya was nasty, she was unreasonable, she was immature and she petty… as hell! News flash homegirl, your approach to her friendships and professional relationship is the reason you can’t maintain a romantic connection. The blowing up, “everything revolves around me” attitude definitely does not work on men.

It’s just sad to see that this almost 50-year-old woman still has these kinds of issues. And more than that, it’s sad to see her taking out her bouts of insecurity on another woman. That’s what it comes down to, apparently, because how are you going to ask Kim Fields, who had and has a very successful acting and directing and producing career about her commercial making credits? I mean, how do you even form your lips to say that?

Kenya Moore’s bug out, jealousy and an almost physical altercation with Kim makes her a zero. The one redeeming thing that Kenya did is go on “Watch What Happens Live” and say that she was ashamed of her actions. That does give her some redemption, but girl, you have got to get more control of your emotions.