It’s time for the hero and zero of the week. In the top spot is a duchess who is all about girl power. In the losing spot is a woman who had no business in a public service position.

This is what we need more of in the world right now. With so much going on in America at this time, and with women at the forefront of both the good and bad of a lot of it, we have to support and believe in one another. Duchess Camilla of Cornwall, a.k.a Prince Charles of Wales’ wife, is this week’s hero because of her all women security team.

It’s a big deal not only because they are all women, but also because they are all Middle Eastern, which are two scary things to be right now for numerous reasons. In fact, the United Arab Emirates’ Presidential Guard has more than 50 women who put their lives on the line for dignitaries on a regular basis. The Duchess, naturally, was thrilled. She told reporters,

“It is quite extraordinary to have them… I have never had women looking after me, and they are the most incredible women. The first one had climbed Everest. I said, ‘How long did it take?’ and she said 16 days. It’s quite remarkable.”

These women are badass and expertly trained in martial arts and combat techniques. They are symbols that show just what women can do all over the world. With the election of an American president that continues to prove just how much doom and gloom is headed our way as a nation, it is refreshing to know that despite the challenges women face, there are places globally where we are making a big difference.

For proudly embracing her all-female security team and for the team itself existing at all, they are all heroes. 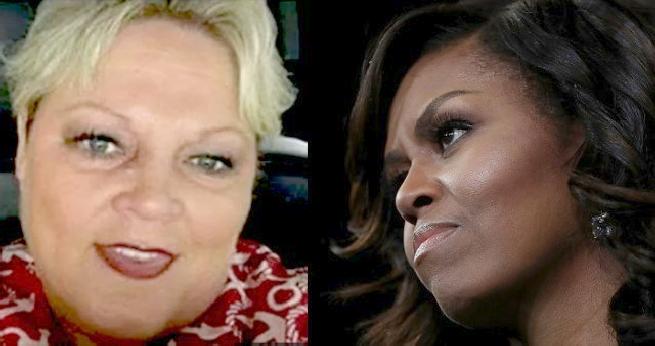 What a disgusting person, the former director of a small West Virginia non-profit, is for her lewd remarks about Michelle Obama. Pamela Ramsey Taylor is this week’s zero because she is a racist woman who has no business serving in a government position. More than that, her remarks prove, once again, just how deeply racist America is.

It goes without saying that this country is pretty messed up right now. I mean Donald Trump is the next president, a fact that I will never, EVER get over. Racists have been empowered by his “tell it like it is” approach to living and they have rallied together to get their guy in office. Taylor, who used to be the director of Clay County Development, made it known via her Facebook account just how “excited” she is that the Obamas will no longer be in the White House. According to her,

“It will be so refreshing to have a classy, beautiful, dignified First Lady back in the White House. I’m tired of seeing a Ape in heels.”

I am so tired of white women criticizing Michelle Obama. How much more qualified can you get? She is Ivy Leagued educated and a made woman. How the hell is that not classy? Melania Trump’s nude pictures are freely dispersed on the Internet for anyone to see. That doesn’t sound classy to me. The group of white women who put their race before their gender is a huge part of the reason we are in the position we are in since 54 percent of them voted for the sexist, bigot that is now the president-elect. That is a damn shame.

The other horrible thing about this situation is that the mayor of the small hick town, also a woman, commented on the status, saying “Just made my day Pam.” This is what’s wrong with us right now. Women are divided. We do not support each other and it shows in how much we go through. Imagine if we got outside of the color of our skin and focused on uniting because we are all women and want to advance a collective, empowering cause. 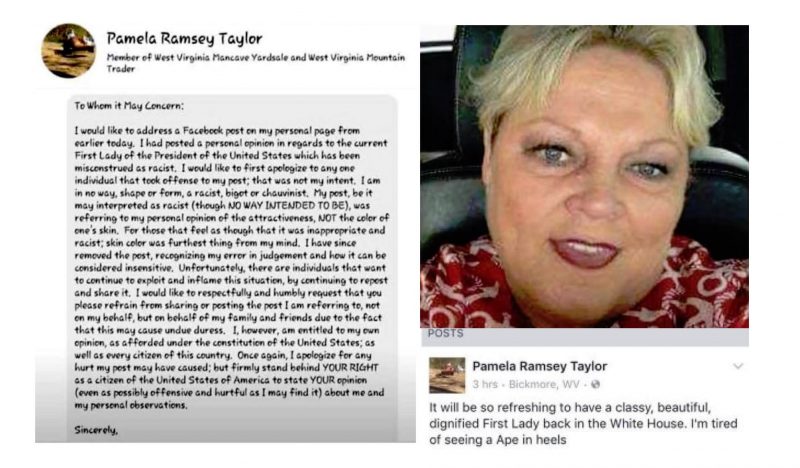 What happened here has become the norm; racists revealing their true colors because they feel they no longer have to hide in the shadows of their private meetings and low-key, biased policies. No matter how white supremacists try to slice it, their comments are riddled with hate and white superiority. Furthermore, Taylor trying to apologize by saying, “My comment was not intended to be racist at all,” is just an attempt to cover her ass. She is a liar and meant everyone word. Furthermore, everything single decision she has made as the director of that nonprofit needs to be reviewed. How can one be fair and balanced with such a demeaning point of view about another race of people?

For showing her ass and strengthening the theory that nothing good will come from a Trump presidency, Pamela Ramsey Taylor is a zero.