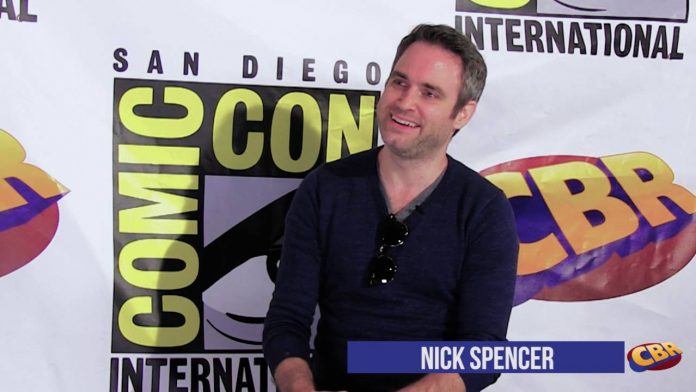 Revisionist history and alternative facts are terms that have been thrown around lately. History does or could get revised as more and more info, fact or accepted alternatives gets published every day. Marvel’s been throwing us much of it lately. In comics, the same thing is happening with Captain America, that he’s always been evil according to comic book writer Nick Spencer. Since it’s a fictional universe, writers get free rein on what history is. It’s a difficult pill to swallow for all Marvel fans, except maybe for people who appreciate a good story.

Perhaps one of the most chilling twists in film history, at least for the Marvel Cinematic Universe, is that SHIELD had been infiltrated by HYDRA since its founding, as told in Captain America: Winter Soldier. Everything was a lie; that the world was actually being set up to accept totalitarian control. With that, and what’s currently happening in the comics, it seems to be a trend now at Marvel that everything we’ve been led to believe all this time is actually false. In comics, the term we’re looking for is called a retcon, short for retroactive continuity.

[ A good example of a retcon in real life is the current situation in the Philippines. There is a new resurgence for the powerful Marcos family whose patriarch former President Ferdinand Marcos was ousted by a much-celebrated peaceful revolution in 1986. Information in various social media is being spread that the Marcoses were the good guys all along and that much-maligned period of Martial Law was actually necessary, that the revolution of 1986 was the worst mistake the developing nation has ever made and that the opposing family, the Aquinos were actually the villains of the story. Many Filipinos, tired and frustrated with all the ineptness, corruption, crime and poverty that followed that revolution, opted to vote for Marcos ally and popular candidate Rodrigo Duterte, known for being strict and totalitarian. The Philippines may have gone to a path that HYDRA intended if it were real. In the US, Donald Trump is making history on his own with alleged ties to Russia. Freedom and individuality could have whole new meanings in the coming years in case that were true. Whether as a form of protest or simply a reflection of the times or what could be, it could explain Marvel Comic’s latest decision on the star-spangled man with a plan. ]

History isn’t set in stone, and it can be changed, corrupted or corrected depending on new information. History is said to be written by the victors of conflict, and according to Nick Spencer, Captain America himself handed victory to HYDRA during World War II, but history was re-written to favor the Allies.

This whole thing began when that infamous frame from the Captain America: Steve Rogers comic circulated the internet when he uttered the words ‘Hail Hydra’. Comic book fans will, of course, attribute this to another of Marvel’s long stories that will end with the return of the old status quo. That the Cosmic Cube entity Kobik was responsible for changing Captain America’s memories and history. That Cap will be a good guy again and that he’s always been on America’s side. But Nick Spencer and Marvel threw a wrench on that prospect by saying that he’s been evil as revealed in the comic Secret Empire #0. That history played out just the same because everything was really a product of a long-term plan with adjustments here and there to cope with events outside of Cap’s control. Then why fight the Red Skull? Part of the plan, because of Red Skull, while a big part of HYDRA had other plans outside of what the ruling HYDRA council wanted and created his own HYDRA branch.

The truth is, Kobik didn’t change Steve Roger’s memories or history, she basically restored it. The history we now know, in which the Allies won the war was because of the Cosmic Cube as well. The Captain America we all know, and love was the result of that change. That change was undone by the Red Skull when he used Kobik thus returning Captain America to his true self. That act itself was prophesied. The Skull thought he was putting Steve under his control but was unaware that Steve was already part of HYDRA. As for the war, the Allies still won and all of Cap’s superheroics against HYDRA still happened, but it’s okay as HYDRA’s ruling council knows they’ll achieve victory anyway in this era because they and Steve saw the future through an object known as The Catalyst.

If Steve was truly evil, why was he granted the Super Soldier serum? Because evil is a point of view and in Steve’s indoctrinated heart, he was doing the right thing. It was Steve’s inherent nobility that Dr. Erskine saw and not his true allegiance.

But after Marvel’s massive Secret Empire event which sacrifices Cap’s entire identity in favor of Marvel’s biggest and perhaps most exciting story yet, will Cap return to the man we all know him to be? That same noble Steve Rogers the general public got to know better in Captain America: First Avenger? That’s up to Marvel. If Cap has been evil all along, the only recourse is to somehow undo what the Red Skull set in motion in Avengers Standoff and return the Marvel Universe to that supposedly false Allied victory. But then the world will be living a lie, a writing corner Marvel should properly dig themselves out of.

Before reacting violently, the world needs to read into the story which unfortunately involves buying over a dozen comic books and those that do will be tasked to explain before the world goes bonkers over Cap’s revised history or even think that giving in to the Dark Side is okay. Secret Empire is turning out to be a better revisionist story than Secret Wars full of fantastical Marvel action and realistic intrigue fit for the modern reader. Whether history will be re-written again to bring Captain America back to the hero we once knew remains to be seen. It’s always possible given to capable hands. For the meantime, Hail Hydra!