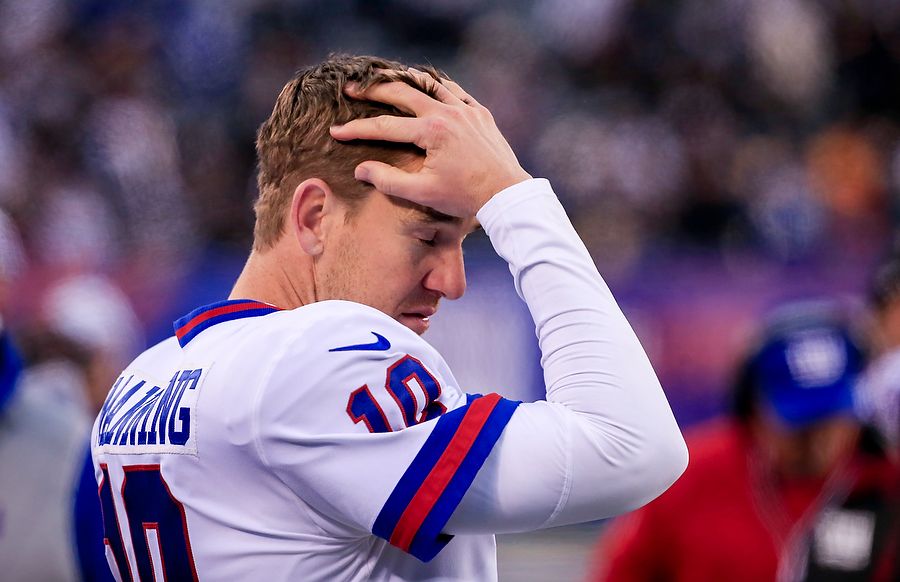 When Ben McAdoo made the terrible decision to bench two-time Super Bowl Champion quarterback Eli Manning last week against the Oakland Raiders, the fans and former members of the organization nearly revolted. Even owner John Mara called the decision embarrassing, expressing remorse that he did nothing to stop it.

So, McAdoo was fired (finally), and Eli was given back his starting position. Of course, with the team’s top four wide receivers out, it doesn’t really matter who plays quarterback right now, but the gesture was felt throughout the NFL.

Sadly, it didn’t last long. Manning held his own, as usual, but the team fell apart midway through the fourth quarter against NFC East division rival Dallas Cowboys Sunday, dropping the game 30-10 when everything was said and done.

Manning enjoyed getting back out there; however, he wanted to give the fans a little bit more than a 20-point loss at home.

“It was a good crowd today, and I appreciate all the support these past weeks,” said Manning. “I’m sorry we couldn’t get them a better game. For three and a half quarters, we were right in the mix.”

Of course, emotions were running high for Eli after returning to the field. Fans were chanting, calling for him. And while they don’t feel let down by him specifically, this whole season has left them wanting more from their team. For Eli, however, it was tough to lose in his first game back after a rollercoaster few weeks, and you could tell that Manning was a bit scrambled postgame.

“The last few weeks have been difficult with losing my starting job and losing your head coach,” continued Manning. “Those things are hard, and they are personal. And they hurt. I don’t like losing a head coach; I take that personally. That’s on me for not doing my job. I don’t like losing my starting job—that’s personal also. It’s just tough right now. We’re trying to find something.”

So, what happens from here? Backup Geno Smith was reportedly annoyed that he was benched one week after “earning” the starting position, but he needs to understand that with the team sitting on only two wins 14 weeks into the season, it isn’t necessarily about which quarterback is going to play the best. Sure, the Giants still want to win, but part of the organization must understand that these may be Eli’s final games in blue, and it is important to the fans to get a few more chances to watch him.

And while interim head coach Steve Spagnuolo wouldn’t say anything for certain, it would be hard to imagine he’ll make the same mistake that finally got McAdoo fired.

“I don’t know. I’m not going to comment on that right now,” said Spagnuolo. “[Manning] would be my gut feeling, but—look, without looking at it or evaluating it, Eli Manning is the quarterback right now.”

Eli loves the Giants that much is clear. And he loves playing football in New York. But even he knows there’s a good chance he won’t be there next season. But, until then, he is the QB for the New York Giants, and he doesn’t want to miss a single chance to be out on that field.