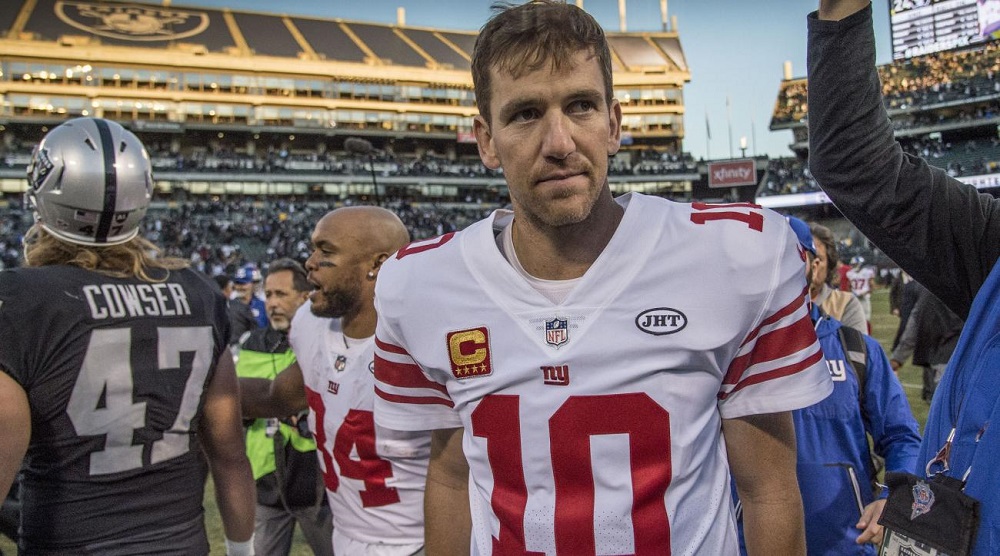 The New York Giants did the unthinkable this weekend before their 24-17 loss to the Oakland Raiders—they benched their longtime quarterback Eli Manning in favor of Geno Smith. The benching broke Manning’s streak of 210 consecutive starts and the hearts of Giants fans everywhere.

“I went in the next day and just said, ‘I can’t do it that way,’” said Manning. “I wasn’t being asked to win a football game. I was asked just to play, in part, to keep a streak alive, and I appreciated that. I wasn’t mad at Coach McAdoo. I wasn’t mad at Jerry Reese. I wasn’t bitter about it. I was upset. I was heartbroken a little bit but understood the consequences in where we were in the season and what was going on, but I just couldn’t accept those rules.”

While Eli tried to play it cool and keep his composure as he always does, the truth came out. It hurt.

“I love playing quarterback for the New York Giants, and I love this organization and the relationships that I’ve built,” continued Manning. “I came here. I was 23 years old and just a little kid, and I’ve kind of grown up around the people in the organization…I’ve loved every second, and a part of me was kind of taken away when that was said.”

Former players and coaches alike spoke out about the benching and the embarrassment to the organization.

It wasn’t for nothing, however, as it was finally enough to force the firing of head coach Ben McAdoo and general manager Jerry Reese. And again, Eli had to act like that’s not what he wanted, but we all know he wasn’t thrilled with them, especially after this week.

“I’m not happy about it,” said Manning. “I’m not happy about Jerry Reese getting fired or Ben McAdoo getting fired. That was not what I wanted or what I was trying to get done by saying I wasn’t going to just start to be pulled. I’ve got great respect for Coach McAdoo. We have a great relationship. Four years. When he became the offensive coordinator, we were coming off a tough season. I’d thrown 25 or 27 interceptions and led the league, and we fixed things. And it wasn’t always perfect, but we came to a good offense again, and we were scoring points and doing a lot of good things. And obviously making the playoffs last year in his first year as the head coach. So, I do appreciate him.”

“Good offense” is a bit of a stretch in my opinion. Fortunately, while Eli has an image to keep up, I’m free to say that I’m glad to see McAdoo go. I’ve been upset with the Giants since they fired Tom Coughlin.

Hoping to get a bit more out of father than the oft-quiet son, Archie Manning has been in hot demand this week. We did get a better look at Eli’s emotions, and Archie explained that one of the big things he told his son is just to stay classy about the whole situation.

“Eli was emotional,” said Archie. “I just told him, ‘Hey, it’s football. It’s life. It’s not the end of the world. Just hang in, be classy.’ I think he did. So, it was kind of an unusual week, but he handled it, and we’re proud of Eli.”

Archie, who played a pivotal role in forcing Eli away from the San Diego Chargers and onto the New York Giants after his son was drafted, also stressed that Eli loves the Giants. Now where or not he returns to them next season, that’s a whole other question.

“I don’t think any of his thoughts are on that right now,” said Archie when asked about his son’s future. “It’s hard out there every Sunday, so I think his mind and focus is just on trying to play a game next Sunday. If they want him to play the next week, to play again. He understands they’ve got a young guy [quarterback Davis Webb] there they may need to see. Eli is a team guy, and he’ll do what the Giants ask him to do.”

Archie is confident, however, that his son will be back out on the field next season, no matter what colors he’s wearing.

“I think Eli will look at everything. I know this, and I’ve just briefly visited with him—he doesn’t have some dead set plan for next year. You can’t. There’s too many unknown things out there, so why make a plan right now when there’s so many decisions to be made. Just finish, do your job the next four weeks, and everything will shake out.”

Personally, I would love to see Manning and Coughlin reunited on the Jacksonville Jaguars. Maybe the younger Manning can pull off the same feat his brother did and turn the team from mediocre to a contender in one year.