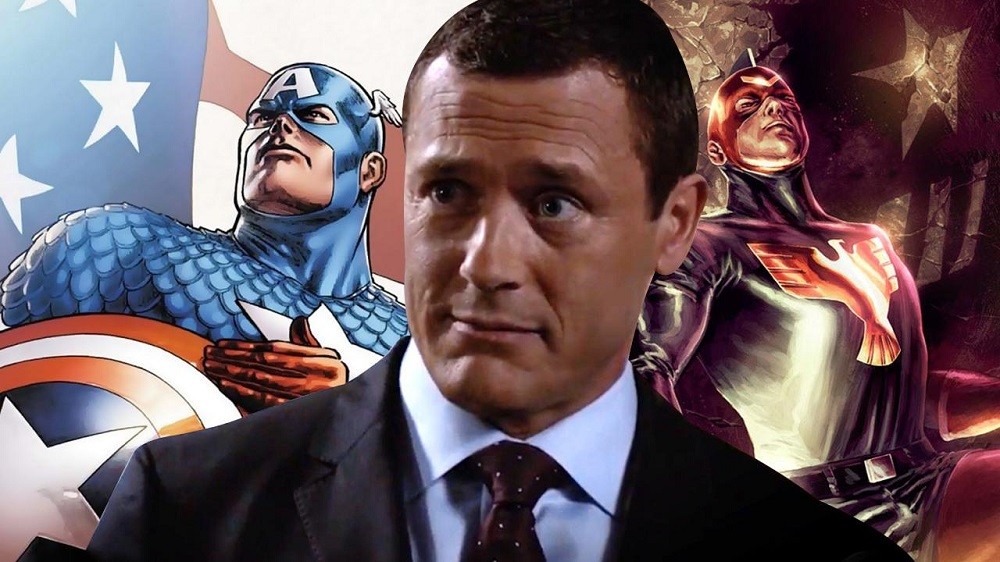 We all know that Steve Rogers is currently AWOL in Wakanda after Captain America: Civil War and technically has given up the mantle after leaving his shield with Tony. Correction, the shield belonged to Howard Stark. Steve just gave it back to Tony. Anyway, SHIELD’s mysterious new director is a rather robust man named Jeffrey. As per request of former director Coulson, SHIELD’s director must be someone with powers chosen by the government to legitimize the agency and be relatable to the superhuman community.

Too bad Tony Stark isn’t really an enhanced human, or he could have gotten the position, plus he showed some animosity to SHIELD in the first Avengers movie. In the comics, Stark got the director’s position in SHIELD during the Civil War storyline.

So who’s this fast-talking guy named Jeffrey? Rumors say his complete name is Jeffrey Mace, a.k.a. the hero known as Patriot in the comics and once held the title of Captain America. Jeffrey Mace, played by actor Jason O’Mara would be Marvel’s attempt to utilize more obscure characters and tease fans who know comic book lore. How did Jeffrey become Captain America?

We know that Captain America (in the MCU) was trapped in ice for 75 years after saving the US from the Red Skull. The same was in the comics where he was trying to stop Baron Zemo’s rocket weapon along with Bucky Barnes. The rocket exploded both were presumed dead. But the US cannot be without a Captain America so someone named Jeffrey Mace took over for a while. Mace’s Captain America mainly fought communism and even the supernatural until the comic fell to irrelevance in the 1960s. Mace was actually the third person in the comics to assume the title. The second was a guy named William Naslund. Mace took over after Naslund was killed in action in 1946.

Jeffrey looks rather young, but it’s not specified whether he’s young due to his powers or exists rather late in the MCU. This MCU incarnation of Jeffrey Mace is an Inhuman with the powers of strength and durability, not an ordinary human as in the comics. Jeffrey managed to take down a compromised agent May very easily. He could actually be retconned into the hero Patriot in the 1950s, 60s or 70s acting alongside the legendary Peggy Carter. However, his knowledge of the SSR seemed rather limited as he left Coulson to discuss SSR history with SHIELD’s visitors. Jeffrey claims to be an objective director, and since not much is known about him, his motives for segregating the once-solid team and compartmentalizing information remains a mystery.

As for Ghost Rider, Robbie Reyes may have appropriated John Blaze’s origin as someone who dealt with ‘the devil’ to gain his powers. Or that he’s just another Ghost Rider that dealt with the devil aside from John Blaze (still keeping fingers crossed). Dealing with Mephisto may just be a way for someone to gain powers in the MCU much like what happened to the comics character named Vengeance.

Robbie claims to be a spirit of vengeance constantly uttering the words vengeance and penance while talking with a tied-up Daisy. This is further proven when he shows up at the research lab the box ghosts came from and saved Mack and Fitz from a ‘ghost’ who turned to evil. Whether or not the ghosts are undead or darkforce empowered, Ghost Rider has the ability to touch and destroy them. It was great to see Mack and Fitz stare in awe at the flaming skeletal being that saved them.

Agents of SHIELD has so far failed to disappoint, and this episode gave us a somewhat ‘familiar’ and interesting new director plus more action for Robbie and Daisy and a subplot for May to keep things interesting with her. They also didn’t drag the fact that Daisy still kept tabs with the group. It also seems that Ghost Rider will be driving Miss Daisy for a while as she comes to terms with herself and eventually rejoins SHIELD.

Also, according to Samuel L. Jackson, SHIELD might make a return to the films in Avengers: Infinity War after its collapse in Captain America: Winter Soldier. Marvel has been rebuilding SHIELD and government relations since Season 3 and is legitimizing it as a UN sanctioned agency this Season 4. Will Nick Fury reclaim his directorship of the agency along with Maria Hill or will we see him working with Jeffrey Mace?

“There’s some way of fixing what they created, and hopefully somebody has that going on, or Nick Fury is out there — wherever he is, probably hanging out with Jules and walking the world — figuring out what happened and how it got to that particular place. Maybe they’ll find out that all that was part of a ruse to get to something else also. That would be great. They’ll bring me back somehow, some way, for some reason. I mean, they didn’t have me around to referee the kids when they didn’t go to their rooms and got in this big old fight. We’ll see what happens.”

If they do bring SHIELD back, fans might actually get their longtime wish. The Avengers reunion with Phil Coulson and probably Daisy’s integration with the Avengers since her powers and training allow her to go toe-to-toe with some of them.