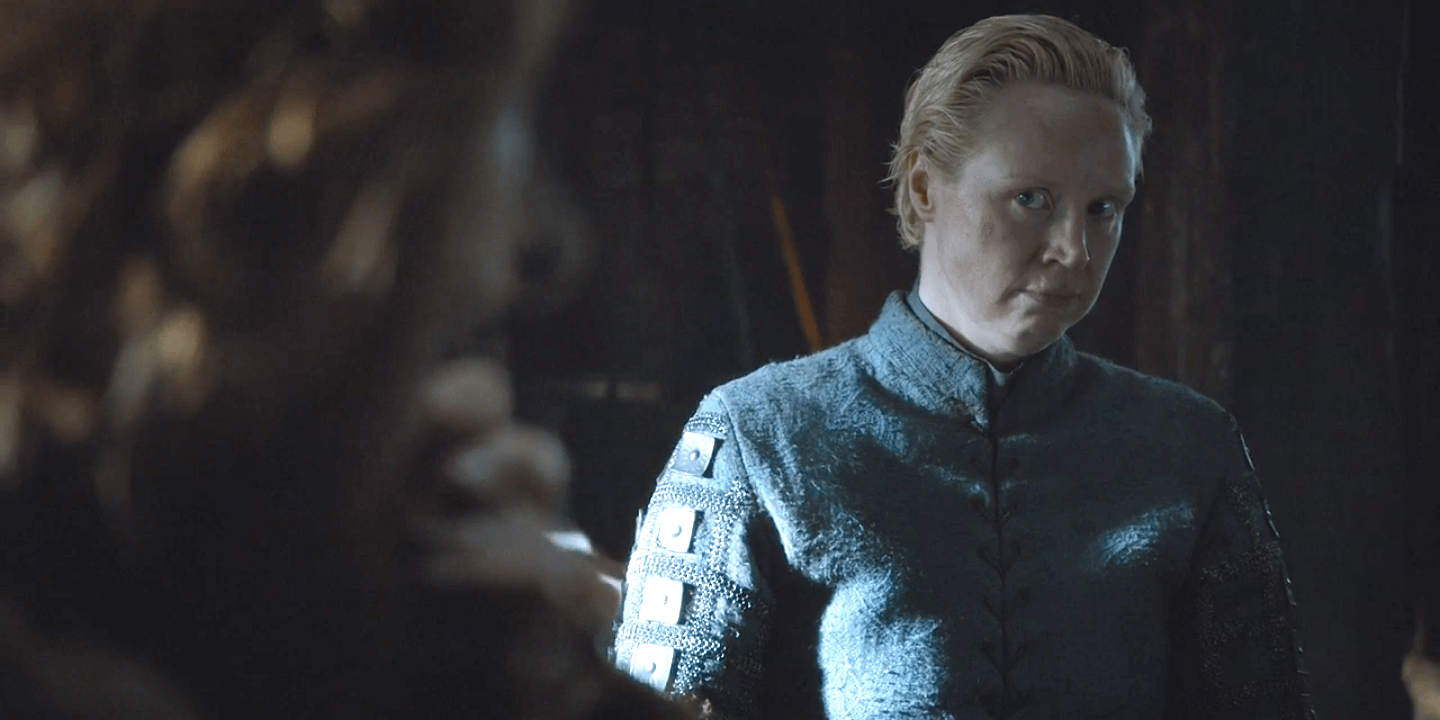 Covering “Game of Thrones” makes it hard to cover other shows the same night. There is always a letdown with another show after watching something as great as Book of Strangers.

It was a big relief seeing Sansa roll up to Castle Black before Jon Snow left for good. It would have been too much to take if there was another near miss.

The reunion between the half-siblings was a rare happy moment for the Starks, though if not for a witch this reunion never happens.

Think of all that’s transpired since these two first left Winterfell. Ned, Robb, and Catelyn Stark have all been murdered. Theon betrayed them and their homeland taken over by what Sansa called a “monster.”

There is a tidbit of Jon and Sansa talking about changing everything that’s happened. This brings up the topic of time travel that was hinted at last week when Ned was able to hear Bran during his flashback.

Time travel on GOT would be a nightmare!

It’s hard enough to keep up with the enormous amount of characters. And there’s no Doc Brown to explain things away with a chalkboard.

Sansa wants Jon to attack Ramsay’s army, but he’s had it with the fighting. Nothing good has really come from it from Jon’s perspective. Hanging a kid and losing the woman he loved are just a sample of what these wars have cost him.

Jon is finally convinced to march on Winterfell after seeing a letter supposedly sent by Ramsay inviting him to fight. I was thinking Sansa crafted the letter in order to make Jon want the fight as much as she does. That doesn’t work since she wouldn’t know Rickon was being held captive, as stated in the letter.

Ramsay knows he can’t march to The Wall, so it’s logical to lure Jon to him.

Ramsay, by the way, was being set up with Rickon and the Wildling lady being handed off to him. Osha tried to knife the evil bastard while giving him a lap dance. He had sniffed it out since Theon had long ago told him she was loyal to the Stark boys.

Pretty disappointing. And I fear Jon Snow will be killed by Ramsay as well. If that happens, I’ll……just keep watching in horror I guess.

The fact that Little Finger (slicker than Falcon shit) is now in control of the Vale’s army does give some hope. His forces combined with whatever troops Jon and the Wildlings can rally may actually put an end to Ramsay’s reign of terror. Don’t hold your breath, though.

The Red Woman got just a tiny bit of screen time this week. Brienne butted in to keep her from having to tell Davos what happened to Shireen, the little princess.

Brienne is still pissed about the shadow baby that killed her friend. Oh, and she made it official for conspiracy theorists who thought Stannis may be alive. She proudly tells Davos she executed him.

Would Tyrion get some redemption this week after failing to fit in with Dany gone? He did much better. I don’t know if his plan will work, but letting the masters keep their slave trade up for another seven years will at least end their funding of the terror organization, Sons of the Harpy.

Grey Worm and Missandei are not pleased these slavers are even allowed in their city. They do go along with Tyrion since that appears to be the only option at the moment. Conquering the cities didn’t solve the problem of slavery altogether, so some other system does need to be established. 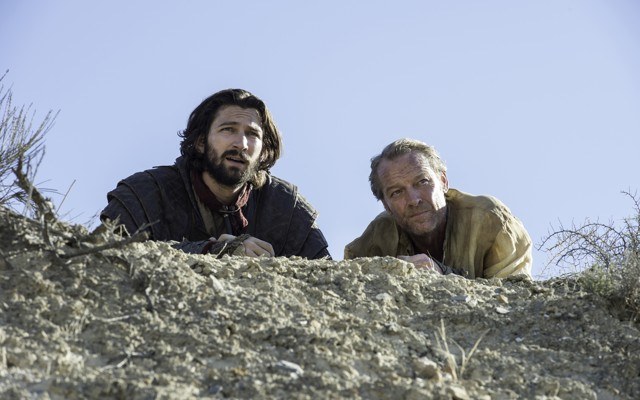 Maybe at the end of the seven years, the masters will have come up with cable TV, cell phones, credit cards, and a 25% tax rate to enslave the poor folks without the use of chains.

Maybe it’s the fact that Dany is not there to take the attention away from Missandei, but it was hard to look away from her as she stood behind Tyrion. The lovely Nathalie Emmanuel should have plenty of work thrown her way after her run on GOT ends.

Over in King’s Landing we see Margaery still holding up. Her brother? He is done! He would admit to anything if the Sparrows promised to release him. Dude would do a naked handstand walk of shame if it got him out of that cage.

The High Sparrow gave a nice speech about his “Road to Damascus” moment. Still he was just trying to manipulate the Queen.

The good news for Margaery is Cersei and Jaime convinced the Small Council to try and save the Queen before she endures her own walk of shame.

The plan could get a lot of folks killed. Granny Tyrell is fine with that….”Better them than us,” she said.

I’m with Granny. But this plan is likely to get Margaery killed as well. We know that would be perfectly fine with Cersei. 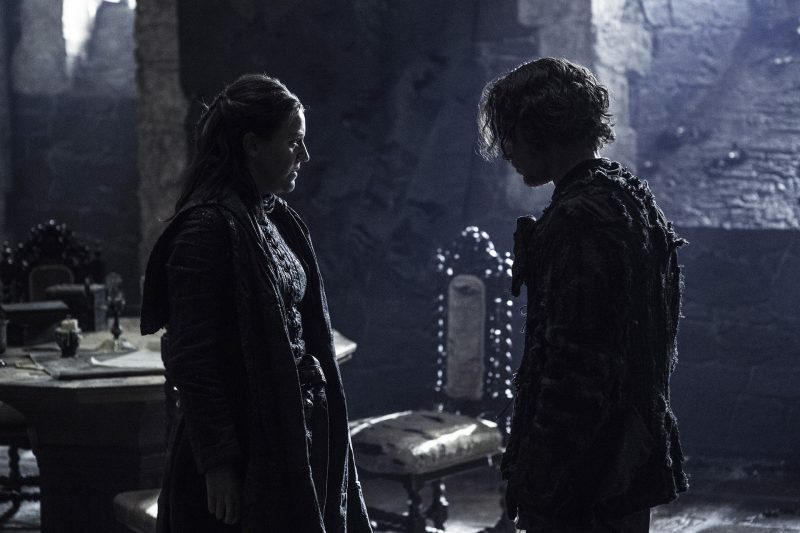 Theon was on screen just long enough this week for his sister to clown him upon his return. I don’t know what he has to offer to help her become the new leader in their kingdom. He’s a shell of his former self, and the guy was no leader before Ramsay broke him in pieces and shipped some of those pieces via FEDEX to his family.

The best part of the recap was saved for last.

Jorah and Daario were close to getting to Dany. They did bicker among themselves on the way, and their plan to pose as merchants went about as well as Osha’s assassination attempt.

Not to mention Jorah’s greyscale disease is revealed to Daario.

Dany could have made a run for it when her saviors found her. That wasn’t what she wanted though.

Her plans are bigger than the “small men” around her, even her friends.

Her judgment scene was the most impressive single scene so far this year. By the way, the Dothraki leaders are a nasty lot. Rape seems to be their most popular hobby. 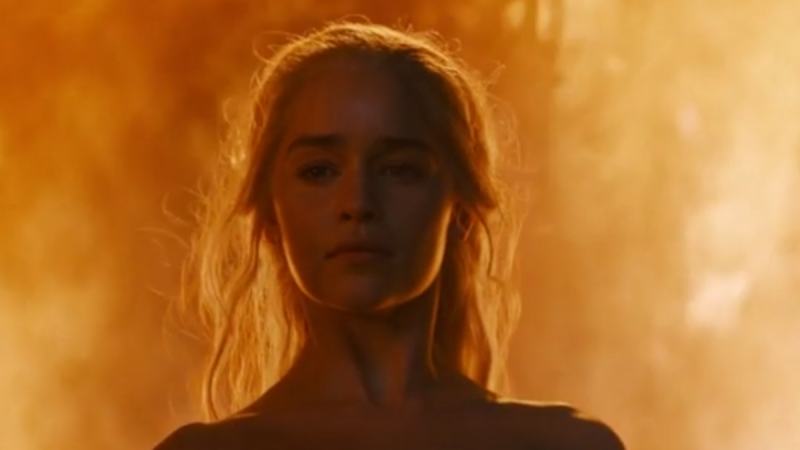 Threatening the Mother of Dragons with rape was a big mistake. One they would not live to regret. She insulted them all by telling them they were “small men” and “not fit to lead.”

Daenerys made it clear she intended to lead their people.

That’s when the threats began…and ended, in a blaze of glory. With book readers flipping out (grow up) over George R. R. Martin‘s lie about Targaryens not being fire-proof, Dany lit the entire tent on fire. 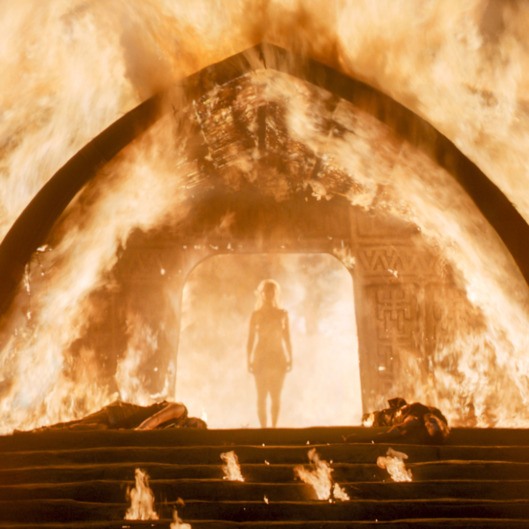 This was the most confident we have seen Dany ever. The girl’s had some triumphant moments, but she wiped out the entire Dothraki leadership without the help of her dragons. Jorah and Daario did help with the setup of the tent, but otherwise Dany singlehandedly took over 100,000 Dothraki.

Pretty damn impressive. Walking out of the burning tent unharmed was her “Neo grabbing the cable attached to a helicopter moment.” She is The One.

Every knee bowed, including Jorah and Daario.

As goosebump worthy as that is, she’s likely to get shanked by Ramsay or even killed by one of her trusted allies. That’s just how GOT rolls.

If Dany ever gets whacked, and I’m fully prepared for that to happen; I think I’ll cancel my cable subscription altogether. Maybe my electricity subscription as well.