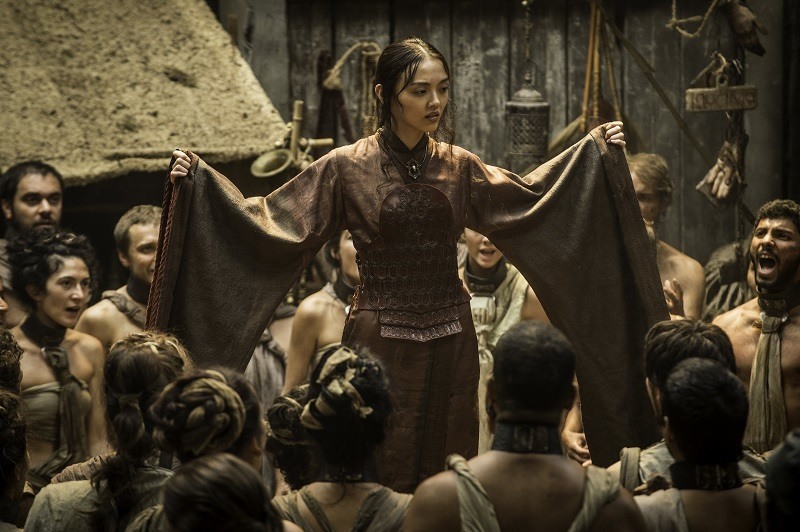 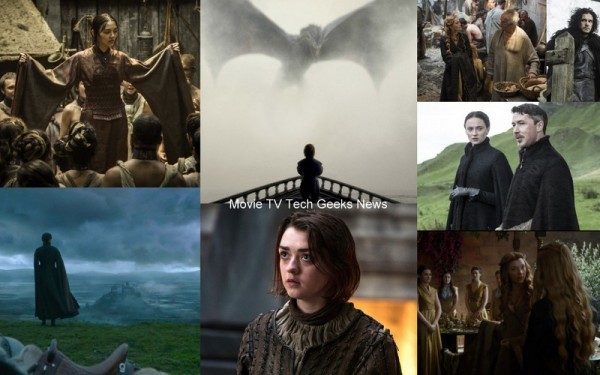 This was the best week ever for Game of Thrones, if your name is King Tommen. This episode was very good, but for the boy king it was the greatest ever as he has discovered a favorite hobby. The Lannisters as a whole, seem weaker and weaker each day however. Cersei made an unexpected move to help them maybe stay in power a bit longer. 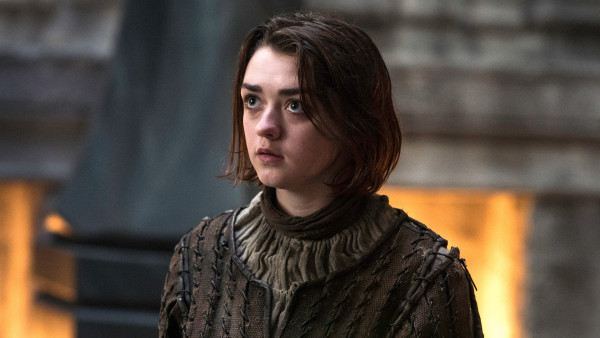 We see Arya at the “House of Black and White” training to be an assassin by sweeping the floor day after day. It appears that her mentor Jaqen H’ghar is a fan of Mr. Miyagi’s training techniques. Either that or the faceless man is getting a lot of cleaning done for free. 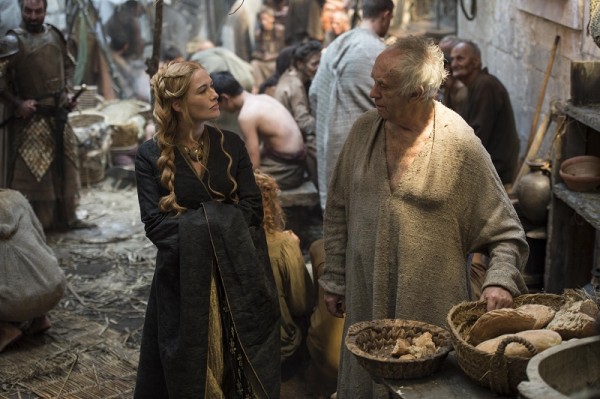 Cersei appears to be a paper tiger now and is seething as a crowd shouts “Queen Margaery” as the wedding march heads through the streets. Tommen and Margaery Tyrell get married then proceed to consummate it that night with glee. Kid is wrapped around the beautiful new queen’s finger. His future plans as king is to sex her up every day, all day. He should make a fine leader! Margaery wasted no time planting the seeds of Cersei’s destruction as Tommen was planting his own seeds. She suggests that his mother is unhappy here and may wish to return to Casterly Rock, her childhood home. Tommen took the bull by the horns the very next day as he all but insisted his mom would be better off leaving his kingdom since she misses her old home so much. 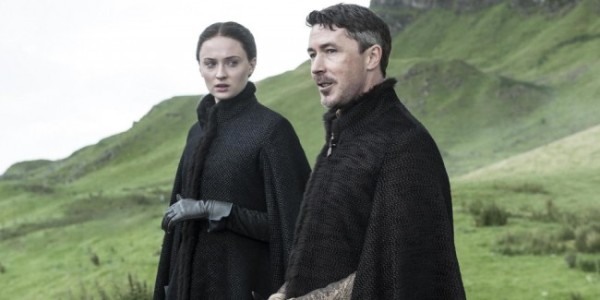 Cersei is pretty much powerless at this point with her daddy gone, her maniacal older son poisoned, and her kingslayer down to one hand. She gets clowned by Margaery in a back and forth that appears civil, but just barely. The new queen and her friends have a nice chuckle at the “queen mother’s” expense once she leaves. Just weeks ago those friends would have been terrified to even look Cersei in the eye, much less laugh at her while she was still within earshot. The new queen is quite brave, maybe too brave. 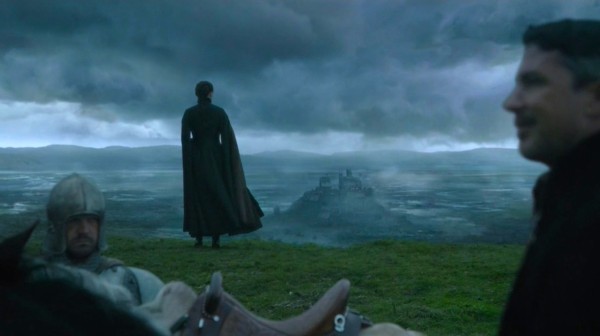 I don’t know why I would be shocked at a betrayal by Littlefinger, but I am naive I guess. He has promised Sansa Stark to one of the nastiest fellows on the show, Ramsay Bolton. First Joffrey, now this psycho! Sansa should just poison herself. Petyr convinces her that she can use this marriage to strengthen her position and avenge her family since she has been a “bystander of tragedy” to this point. She is sickened by this turn of events but to her credit she puts on a pretty face once she is in front of her future in laws, the Boltons.

Brienne and Pod are overlooking this situation and plan on rescuing Sansa at some point. She may finally be welcomed as a savior by one of the Stark girls….maybe. Pod is going to be trained by Brienne. He may not be a knight afterward, but he will be able to fight. Oh, and Brienne is still intent on killing Stannis for the murder of her childhood friend Renly Baratheon. She tells Pod the story of Renly defending her when they were young and how she failed to do the same for him. 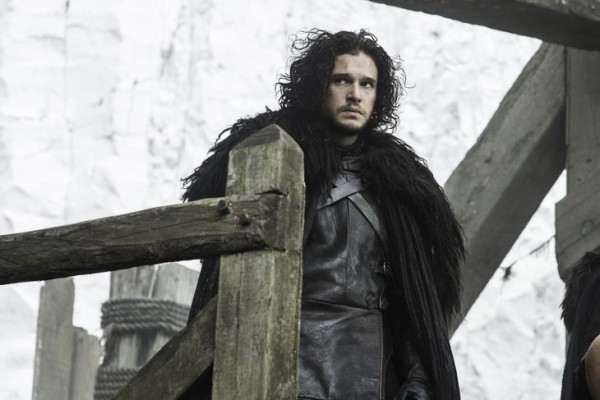 Once again Jon Snow refuses Stannis’ offer of running Winterfell once he takes it back from the Boltons. I wonder if Snow’s answer would be different had he known his sister Sansa is being forced to marry into that family. Stannis keeps giving Snow great advice, even if it is opposite that of Vito Corleone. Keeping enemies close is only a good idea if you don’t have very many according to Baratheon, which is a very good point. Davos Seaworth stays behind to add his own advice after his king leaves the room. He admires the loyalty of Snow to his oath, but advises the last part of the oath means more that defending a castle at the edge of the Earth away from all the fighting. Davos admits to not being the most learned man, but can’t see any wrong in actually getting in the muck to be a worthy “shield to the realms of men.” I hope this has swayed Jon Snow to join Stannis at least in the short term.

Arya’s training continues as she is told she must let go of her old self, including all her belongings. She complies as she tosses all her material items into the sea…except for “Needle.” She just can’t let go of her sword so she hides it away in the rocks. This is reminiscent of Luke Skywalker not quite buying into Master Yoda’s training, then having to go back later to complete it.

Sansa has hidden her disgust at being with the Boltons very well and is escorted to her quarters by an elderly lady. She welcomes Sansa home, telling her that “The North remembers.” Best moment of the episode.

Jon Snow is handing out orders in his first meeting as ruler of Castle Black. He is just in his orders, but the bald coward Janos Slynt decides to refuse his new position and even goes to the “bastard card.” That leads to him being taken outside for his execution. It looked like Snow would show the crying man mercy once he changed his tune saying he was sorry and was just scared and always had been. The label of bastard dropped as soon as the head of Janos was lopped off by Jon Snow. He actually did show this man mercy by ending his life. This world is no place for a sniveling coward. Stannis was as impressed as I was. 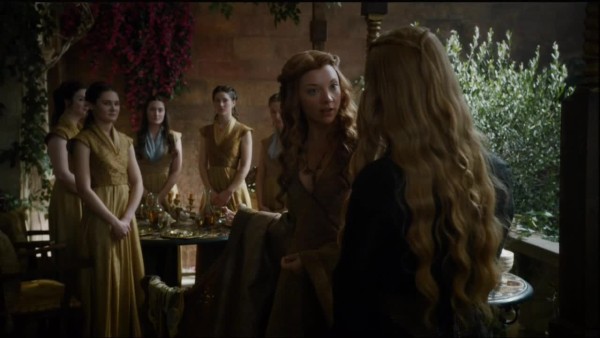 The Sparrows cult is gaining momentum. They break into one of Littlefinger’s brothels and take the highest priest in the land out for public scorn for his sins. The priest protests to Cersei, but ends up in prison for his troubles. Cersei can’t stand immoral acts by her religious leaders…actually she just sees the Sparrows gaining more and more power so she wants an ally. She goes to see the High Sparrow, who is a simple old man serving the hungry as he walks barefoot. This cult appears to be doing good things and could get a ton of people behind them in a hurry. Cersei plans on them having her back. Margaery best beware.

Cersei contacts Littlefinger, but Roose Bolton reads the message as well. It is hard to see where Petyr’s loyalties lie. He is clearly out for himself always, but he is playing musical chairs with the ever changing power brokers in Westeros. 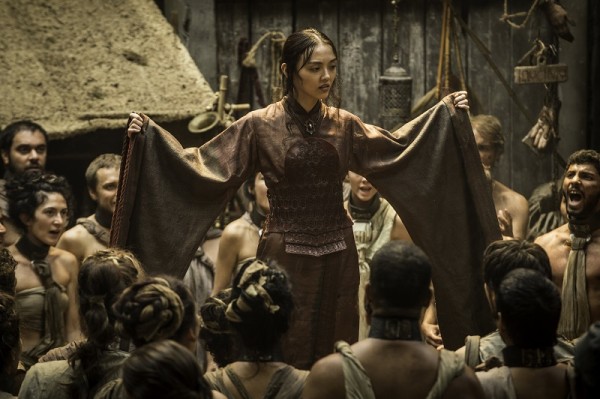 Tyrion and Varys get a little screen time at the end of the episode. The dwarf is going mad with no human contact, mainly whores. He demands they take a tour of the city even though he knows he could be beheaded if seen by the wrong person. Everything went well until Tyrion wandered off to a makeshift bathroom on a wall. That’s when Jorah Mormont kidnapped him. This is a recurring theme for Tyrion, who was taken hostage by Catelyn Stark early in the series. Jorah says he is taking the drunken dwarf to the queen. I initially thought that meant Daenerys Targaryen so he could win her trust back. After thinking it over, I think he knows Dany will never trust him again. So I believe him to be taking Tyrion to Cersei. It sounds crazy, but Jorah is without many cards to play. Once again Tyrion is his own worst enemy because he can’t stay out of the damn bottle.