The opening of this week’s Game of Thrones episode was a magnificent scene with Arya Stark sailing through the awe inspiring entrance to Braavos. She is seeking out her personal assassin, Jaqen H’ghar. She doesn’t have a lot of people to turn to since seemingly everyone she is connected to ends up dead. The person who would provide her the most safety, Brienne, Arya wanted no part of after seeing her battle The Hound last season. Braavos is a very busy place with lots of commerce and people hustling every which way. Arya makes her way to the “House of Black and White” to no avail as she sits outside waiting and waiting, reciting the names of those she wishes dead. After her patience runs out, she tosses the coin given to her by Jaqen into the sea. 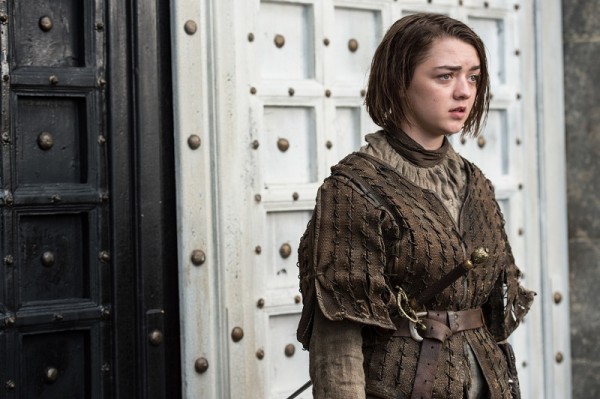 Speaking of Brienne, she is still kinda emo as her and Pod make their way and end up in the same inn as Littlefinger and Sansa Stark. Once again, Brienne’s help is refused by one of Catelyn Stark’s daughters. Sansa is content to stay with Petyr at this point, and who could blame her. I’d take my chances with him and his band of guards over a single lady and her squire. Brienne and Pod get separated after they flee the inn and she ends up saving him from a couple of Petyr’s guards. Brienne may be the best fighter among the main characters at this point, with the Kingslayer forced to fight southpaw and the Mountain nearly dying at the hands of Oberyn. Bronn may have an edge on the lady knight, but not by much. 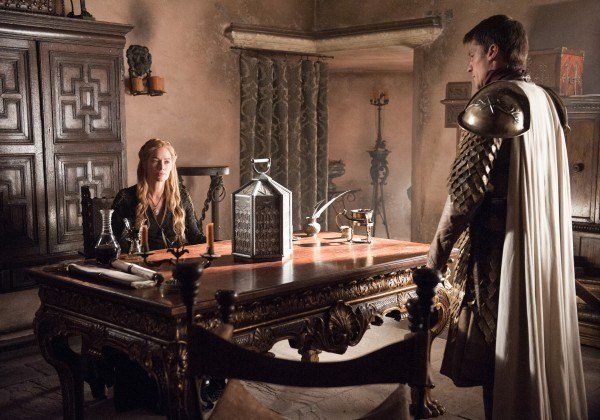 Cersei is all over Jaime, and not in an incestuous way. She is fearful for the life of her daughter that Tyrion had sent away to Dorne. Cersei blames Jaime for their kid being there in the first place and sees him as being unable to protect any of their bastard children. Cersei figures the rulers in Dorne would do what she would, namely slaughter an innocent child to avenge the death of their prince. If Oberyn’s lover, Ellaria Sand, had her way then that is exactly what would happen. She is quite pissed about seeing her prince’s head splattered all over the ground. Oberyn’s brother, Prince Doran Martell, won’t hear of it as “they do not mutilate little girls in Dorne.” Also he knows that his brother was not murdered, but killed in a trial by combat that he had volunteered to be involved in. Some people in this universe are actually civilized. Too bad they seem to be going extinct rapidly.

One of my favorite characters made an appearance this week. Bronn is seen strolling along with his lady on the beach in front of his new castle, which is pretty great. Cersei set him up nicely in exchange for him not being Tyrion’s champion. Bronn made out like a bandit on that deal, as I’m not too sure he would have taken on the Mountain in that fight anyway. Too little to gain and too much to lose. Jaime offers the mercenary an even bigger castle if he helps him get his daughter home safely from Dorne. Bronn is going to go since this sets up a good road trip between two very interesting characters. Does Bronn really need a larger castle though? Oh and the Lannisters’ power is shaky at best right now, so Jaime may be writing checks with his golden hand that his crumbling family cannot cash.

Cersei is basically ruling in Tommen’s stead. She has begun paying for the heads of little people who look anything like Tyrion. She is a vicious person to have in charge of a bounty hunting scenario. She wasn’t even too unhappy with the wrong heads being handed to her. She felt like the bounty hunters were making a good effort and didn’t want to dampen their enthusiasm. What a psycho! 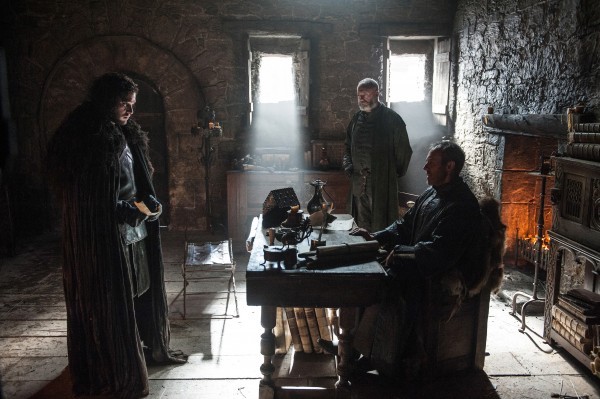 I can’t believe Jon Snow would turn down Stannis when he is offered the him the name of Stark along with lordship of Winterfell if he simply fights for him. Snow is too loyal for his own good. He is intent on keeping his oath to the Night’s Watch and that damn wall! As the Watchmen vote in a new leader, having lost the former one in the wildling battle, Sam nominates his boy Jon for the leadership role. Sam also clowns the bald guy, Janos Slynt, who cowered in a hidden room as the battle with the wildlings raged on. Sam is not the pushover he once was and I like the new confidence. 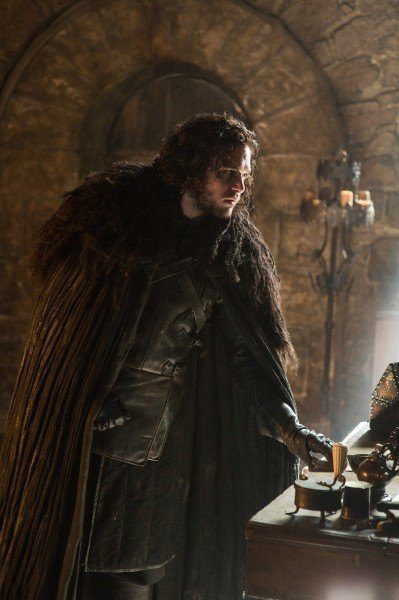 The vote ended up a tie between Snow and Ser Alliser Thorne, so Aemon Targaryen put his deciding vote on Jon Snow. Quite the endorsement. Nice that Snow is the leader, but he is still at this miserable place leading a bunch of rejects. Better to have a lion leading a bunch of jackasses than a jackass leading a pack of lions I guess, but not better for the lion in charge. It appears that the wall would have to be completely over run and everyone there killed in order for Jon Snow to get out of his oath to the Night’s Watch. 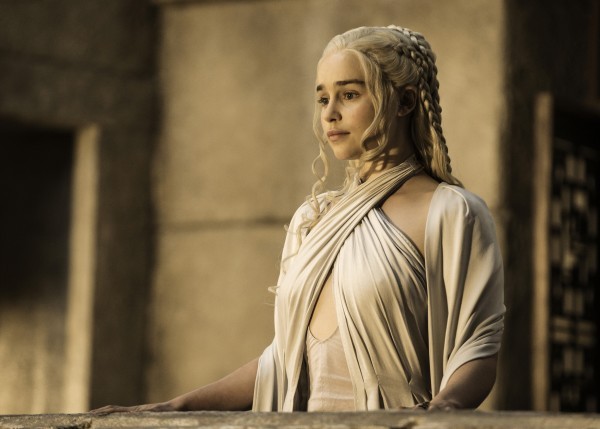 Daenerys continues to struggle with her leadership. There is no right or wrong way to handle these weird scenarios she faces. If she does nothing to the former slave who kills one of the masked men that is awaiting trial, then her authority and her laws have no teeth. But if she beheads the newly free young man, which is exactly what happens, then the former slaves turn on her for not showing mercy. The crowd wide hissing was pretty scary even before the stones started flying toward the platinum haired queen. She cannot appear weak even when she does something unpopular. Rulers can’t second guess themselves or have anyone else doing so in public. 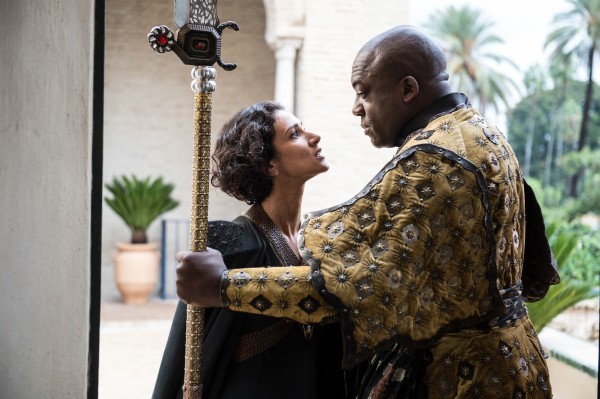 Dany’s inner circle wanted to guard her during the night after the riot resulting from the execution she ordered. But she declined, went to the roof of the pyramid for some clarity, and low and behold, Drogon had returned, perched above her. Daenerys touched the giant flamethrower briefly before he took flight once again. This dragon is huge at this point and will wreak havoc on any city he chooses. It’s just a matter of who controls him. Dany’s control is getting shakier just like the Lannisters’. Her people and her dragons are not falling in line like they once did. Ruling ain’t easy girl, especially when you have a conscious. 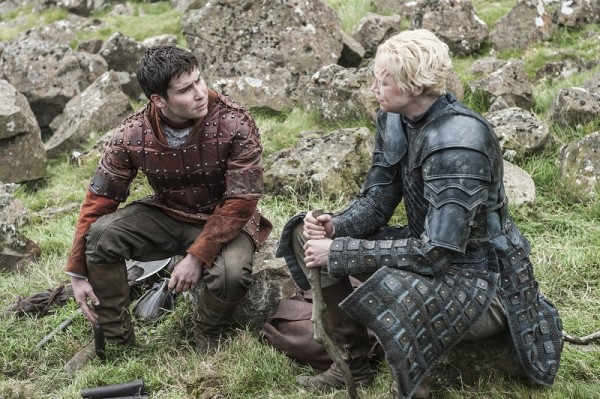 Next week should heat up a bit as the table has been set. I like the prospect of Jaime and Bronn hitting the trail together and we are in store for more great things from the duo of Varys and Tyrion. I don’t like the fact that Jon Snow will be staying at the wall, but it could set up to be even better than him fighting in Stannis’ army. I don’t see how that’s possible, however last year’s battle at the wall was one of the best episodes of the entire series.