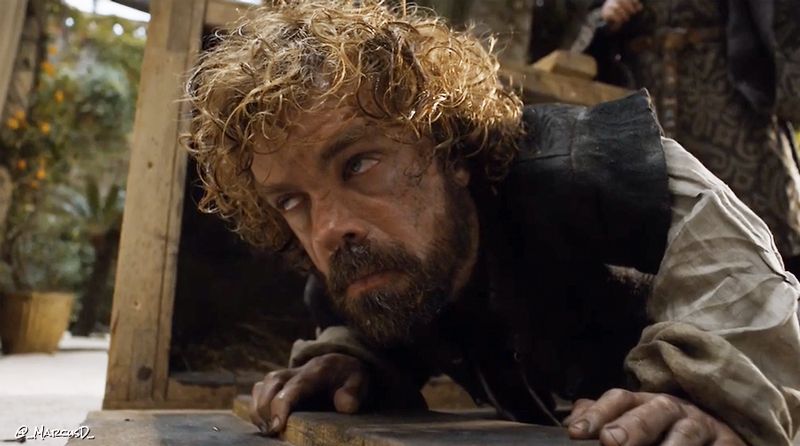 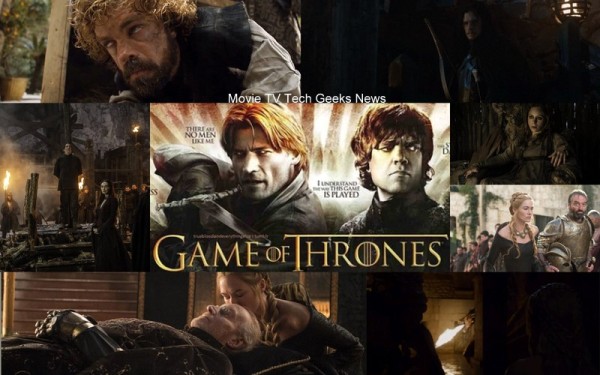 The best show on tv, Game of Thrones, got it crackin again last night with the episode called “The Wars To Come.” This one wasn’t full of action and didn’t hold any wild twists, but it was needed to neatly wrap up some plot points from last season. Tywin Lannister had to be mourned by the few that loved him, and his death secretly celebrated by those that hated and feared the man. Mance Rayder had to be dealt with after his capture last year as well. The man needed to swallow his pride, instead he ended up swallowing large doses of carbon monoxide. 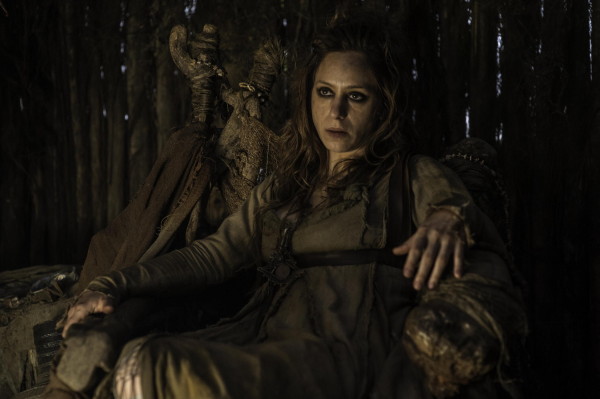 The episode started out with a dark fairy tale like scene involving Cersei Lannister as a youngster. She was just as cruel back then as now, just more experienced in the present day. She threatened a witch with an eye gouging if she didn’t predict her future. The witch complied, telling her that she would marry the king, then laughed hysterically as she foretold all the horrors involving Cersei’s future children. The witch also mentioned how she would be replaced by a younger more beautiful queen eventually. That set the stage for Cersei being paranoid and hateful toward any female threat that popped up as she aged. 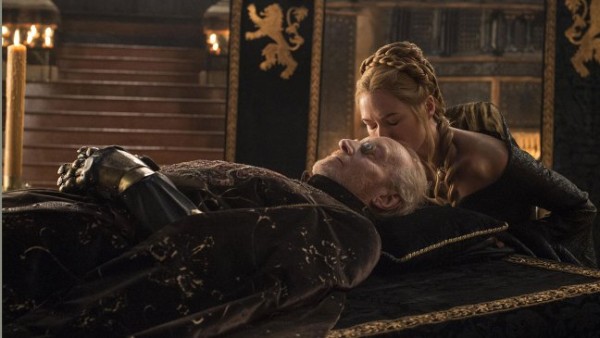 Tywin is an intimidating figure even as a dead man. “A force to be reckoned with” no more however. Dude is not very dangerous with stones on his cold dead eyes. Jaime tries to make Cersei see how they need to be a solid team since many will be coming for them now that the leader of the Lannister clan is laid out before them awaiting the memorial service. Cersei is more concerned with the “little monster” responsible for the murder. Her bitterness at Tyrion may be her undoing. 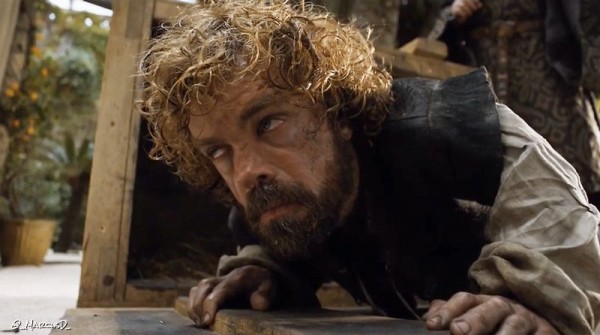 Tyrion had a rough boat ride as he escaped Westeros like a pet in a box with air holes. The ride was pretty unpleasant and he survived the trip by basically staying drunk the entire time. Not a good plan inside a small box on rough seas. He needed a yoga and vomit session to get himself straightened out once he and Varys landed.

The Unsullied are apparently in need of romance despite their lack of equipment. One warrior is seen visiting a brothel for some cuddling. I hope the spooning was worth it, as it cost him his throat. Some masked assassin took “White Rat’s” life as he lay with his favorite whore. This crime leads Daenerys to try and flush out the murders. It also leads to an awkward conversation between Grey Worm and Missandei. She intends on hooking up with the Unsullied leader and wants to know why one of his men would visit a whore. That’s a hint dude! 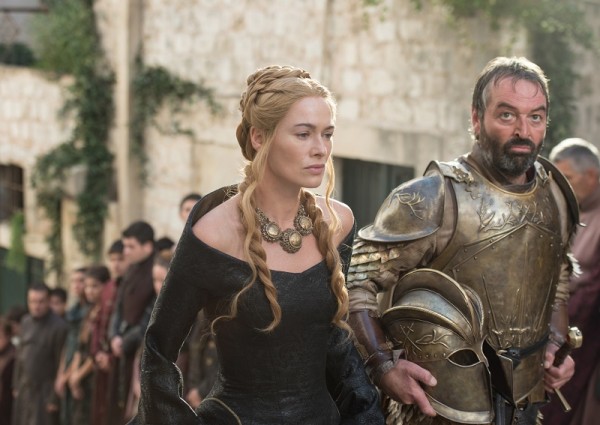 The humble hero Jon Snow is seen training at The Wall once again as Sam looks on lazily. Sam feels like he is ready for any combat now that he has killed one White Walker. Stannis wants Snow to convince Mance to kneel before him so the Wildlings will follow. The other option is to be burned alive. Stannis is indeed a “serious man” to quote Tyrion. Stannis intends on going after Roose Bolton (great news), but needs more men….in the form of the Wildlings.

Littlefinger and Sansa are seen leaving young Robin Arryn for training as they head out. Robin is the worst fighter in the known world and will likely end up dead from this sword school. Sansa and Littlefinger are heading for a land that will be safer according to Petyr. In this world, I can’t imagine such a place. They pass by Brienne as she contemplates where to go and what to do with her life since Ayra didn’t want her protection. Brienne feels like all the good masters are dead and only monsters left in their place.

Cersei was plenty irritable at the memorial for her father. After seeing her youngest boy Tommen, now king, panting after Margaery Tyrell when she merely touches his hand, Cersei looks like she could spit nails. Then she has to deal with her now religious cousin telling her how mercy and justice could come to her concerning the murder of Robert. This is the kid who gave Robert the tainted wine that slowed him enough so he was wounded by the wild boar. That started this entire battle for the Iron Throne. The kingdom was doing just fine with the fat drunk running things. Now it’s basically anarchy.

I can’t wait for the meeting between Dany and Tyrion. That is where this season is headed as Varys tells the shortest Lannister about a female leader that could bring peace to this world. One that “is stronger than Tommen (wouldn’t take much), but gentler than Stannis (most humans).” Put Tyrion and Varys on Team Targaryen and the odds go way up on her sitting on the Iron Throne. I’m all in on this alliance, though I know the more I love The Mother of Dragons, the more shaken I will be if she gets squashed like so many “good guys” before her.

The Dragon Queen is asked to re-open the fighting pits, but is opposed to it until her lover Daario makes a case for it. He tells her his “Gladiator-like” tale that may change her judgement. Dany visits her two chained dragons and sees their disposition has changed quite a bit since they have been left in the dark with no attention at all. They appear to be the equivalent to a chained junkyard dog that has received no love. Thier big brother dragon caused all the trouble and they got punished for it. The big black dragon, Drogon, hasn’t been seen in weeks and probably has left a pile of charred bones in his wake. Daenerys is afraid of her own dragons now. Not a positive development at all….just when I had made her the favorite to win the Throne. 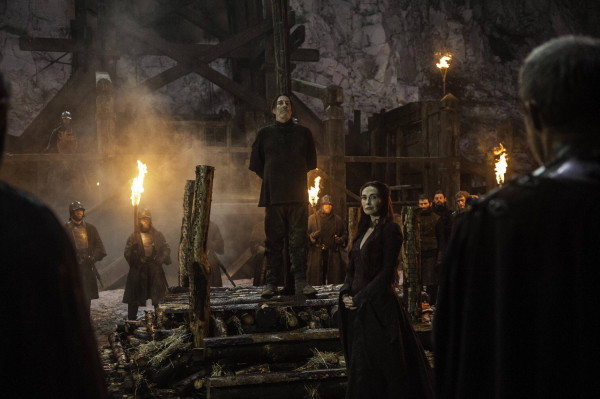 Mance is too proud to bend the knee before Stannis of course, so he is sent to the stake to burn. He wishes Stannis good fortune in the wars to come. This man was a true warrior. Stannis admires this decision, but has to do what is necessary. His nutjob wife smiles with glee as the king of the Wildlings is set ablaze by Melisandre. Jon Snow hates the decision so he takes action with no regard for himself as he ends Mance’s suffering with an arrow to the heart. A move that is “stronger than Tommen, but gentler than Stannis.” Snow has what it takes to sit on the Iron Throne. Whether that ever comes to fruition remains to be seen. He may be too kind to do what is necessary to rule.

This episode set the stage for the season. Stannis is going to go after Roose Bolton at Winterfell. The Lannisters are vulnerable now that Tywin is gone. The best plot involves Varys and Tyrion hooking up with Dany…..not in a freaky way, but as advisers to the Dragon Queen. Though Tyrion may make a lustful move or two. Tyrion needs to get over his guilt about killing his own father. The guy hated the “half man” anyway, but this just shows us how good a person Tyrion really is. Varys will have to keep him out of the bottle long enough to be of real help to Daenerys. That may be the biggest battle of the season.