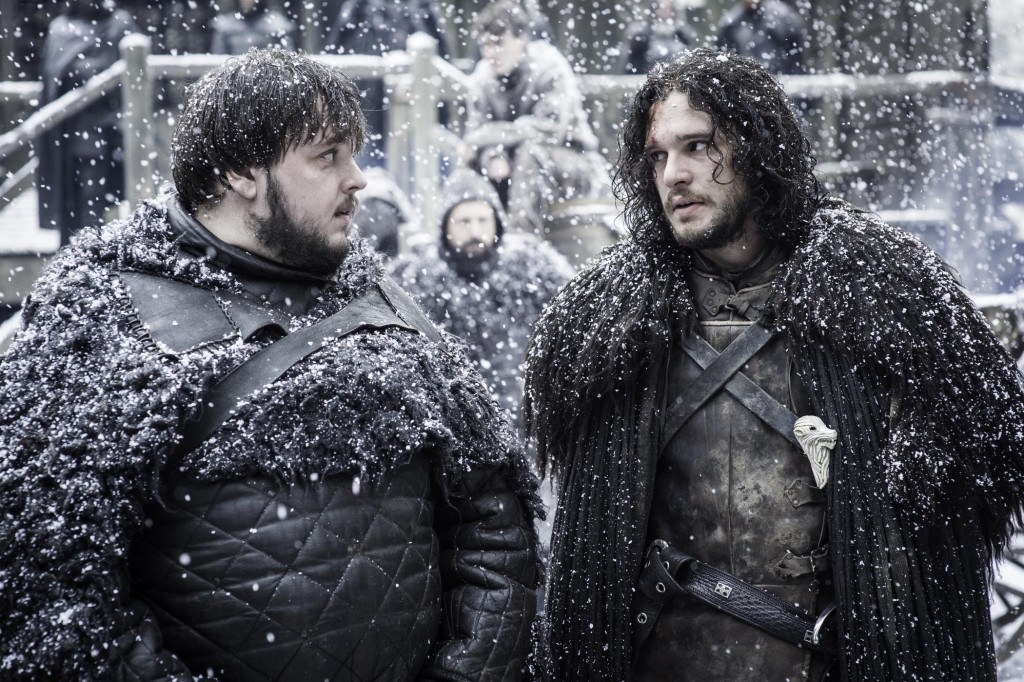 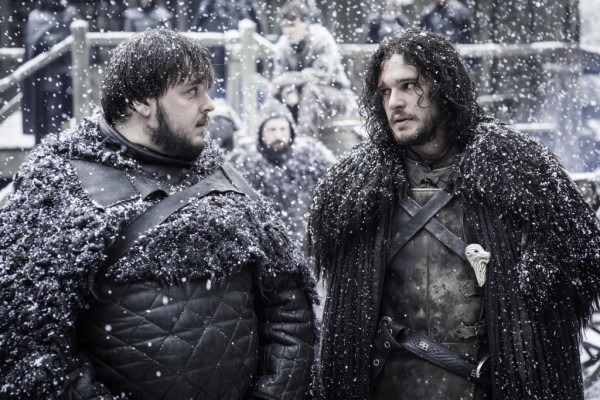 Almost perfect. That’s how I would describe “The Dance of Dragons.” The next to last episode of Game of Thrones for 2015 showed the dark side of war with Stannis making a terrible sacrifice. Then the show turns around and shows the glory of another leader when Dany made her greatness evident to a stadium full of people.

I was wrong to doubt the deviousness of Ramsay Bolton. His 20 men wreaked havoc on Stannis’ already suffering army. Burning up the food storages and using fire to create chaos was brilliant. That move should break Stannis and company. At the very least it made Baratheon consider using the nuclear option, sacrificing his own kid.

We didn’t get much from Jon Snow and the Wildlings this week. They did make it back to the Wall as they were allowed to pass through the tunnel. The shot of the giant compared to the normal sized men was very cool. Dude is immense!

Stannis sends his right hand man Davos back to the Wall to get help. He needs Davos to convince Jon Snow of the urgency of the situation. Stannis also needs this good man to be out of the way when he sends his daughter to the wood stack. The army is a hot mess with lots of coughing among the starving warriors. Princess Shireen is reading “A Dance of Dragons,” as Davos tells her goodbye with a small gift he has carved. This man tried to save the girl by offering to take her with him back to Castle Black, but Stannis would not allow it.

Not much happened in Dorne this week. Jaime and Bronn are freed by the merciful Doran Martell. There are conditions, including the engagement between Trystane Martell and Myrcella Baratheon remaining intact. Also Trystane will take Oberyn’s old slot on the Small Council. These Martell’s should know better than send their people to King’s Landing by now!

Arya gets sideways in her training when she fails to kill her target, the insurance guy from last week. She is derailed by the despicable Meryn Trant who is there with Mace Tyrell to visit the Iron Bank reps. Arya is still Arya as she cannot let go of the past, or her hit list. I imagine next week will be the last episode for Mr. Trant as Arya maybe transforms into a faceless prostitute in order to take his soul. 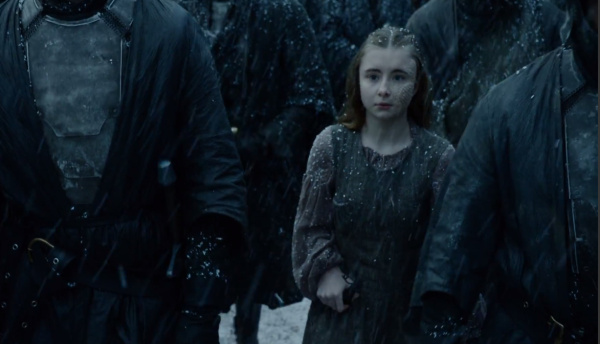 We knew it was coming, but little Princess Shireen’s march to the burning stake was a tough watch. Stannis had told her abut destiny and how the world sometimes forces a man’s hand. He had asked her to forgive him, but she didn’t understand at the time. How an army of fighting men could watch a little girl being burned alive by Milesandre is beyond me. How can they follow a “king” that would sacrifice his own daughter to gain power? 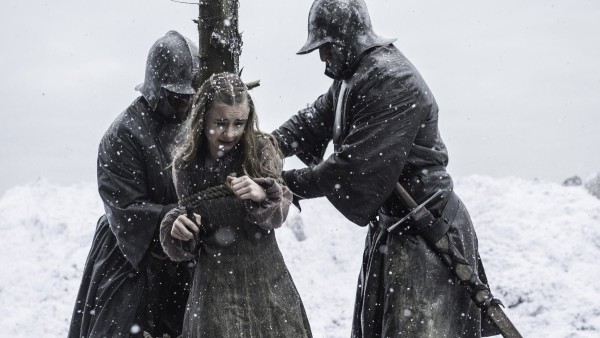 The biggest scene of the episode and most likely this season was during the Great Games. The fighting pits were on the biggest stage and HBO pulled it off brilliantly. The fighting wasn’t as smooth as we have seen before, but it was not bad. Jorah just seemed clunky and slower than before. Could be the greyscale I guess.

Daenerys is seated front and center of course, along with her inner circle, Tyrion included now. Her new hubby is suspiciously late and is harassed by Daario the entire time. Tyrion is disgusted by these games and doesn’t hide his displeasure. He says the world has enough death to go around without him having to view it in his leisure time.

Dany was surprised to see Jorah back in the fighting world as he spoke directly to her in old Valyrian. Dany’s hubby tries to interrupt but is quickly told to STFU by Daario. Daenerys could have stopped the fighting anytime she wanted and pardoned Jorah, but she let the fights go forward. Jorah was nearly killed at one point, but she still let it continue. Jorah finally wins the contest with all the other gladiators fallen. He sees something in the stands then hurls a spear in Dany’s direction….killing a member of The Sons of the Harpy. The Harpy was just before attacking Dany while everyone focused on the pits. Jorah saved Khaleesi once again. Yes he was a spy, but her protector he has always been. She finally forgave Jorah as she took his hand when he climbed up to lead her to safety as all hell broke loose in the stadium. Great to see his redemption.

Dany’s new spouse was stabbed to death by a SOTH member so even if he was in on the revolt, it did him no good. The crowd was in full panic as Harpy guys slit throats, stabbed many Unsullied, and generally ruined the Great Games. The killing was supposed to stay in the pits, not spread to the stands in a Ron Artest type scenario. Dany should try and sell the remaining members of the Unsullied army or at least let them be an offensive force only. They are horrible at defensive tactics, as they nearly let their Queen get whacked in the most public place possible.

It looked like Dany and crew may not make it out alive. They were encircled by the SOTH and Khaleesi closed her eyes as she realized it was just about over. Once again she had a card that no other leader has…..a full grown, man eating, fire setting dragon! Drogon came roaring out of the sky spitting fire and landed on the floor of the stadium to save his mother. Drogon chewed up and spat out a SOTH dude before setting several more on fire. The surviving fans that came to the Great Games got their money’s worth seeing this giant dragon wreak hot havoc.

Drogon did get hurt as the Harpies tossed a few spears his way. Daenerys pulled one out of his back then stood in his face as he roared at her fiercely. She IS the Mother of Dragons, unafraid. She finally climbed on the back of Drogon, commanding him to fly away out of danger. She is on the back of the dragon flying out of the stadium with the great pyramid in the background and Tyrion looking up at her astounded. The little man now knows what Jorah was talking about when he was forever changed by seeing Dany walk out of the fire with the baby dragons.

I loved the final scene. It was something that you would expect to see in a blockbuster movie, not part of a weekly series. The gladiator fighting could have been better in my opinion and I don’t like the fact that Dany just left the place. Maybe her inner circle needed more help for all she knew. And I certainly do not want to spend all next week or the off season wondering where she and Drogon have gone!

These Harpies are some sneaky rat bastards that are impossible to deal with like a normal opponent. You can’t line up and fight them like a regular army. They just randomly show up and create chaos. It may take turning Meereen into dust to solve this problem like Dany mentioned before the fighting started up.

We have just one episode left for Game of Thrones this season. I hate that it goes so fast, but that’s what happens with a show this good. I will be doing a season wrap up after next week’s recap so be sure to catch that as well.