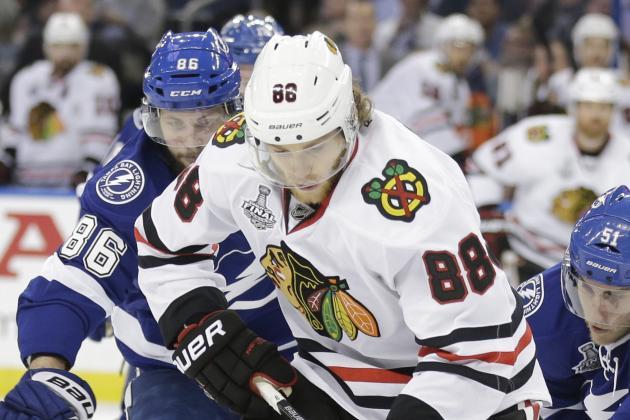 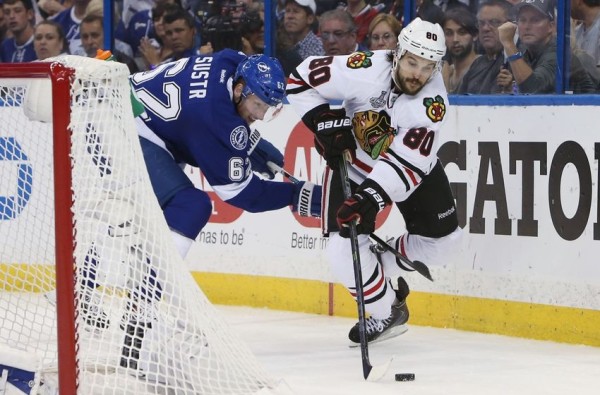 Chicago Blackhawks continue moving forward eager to land that Stanley Cup as they beat the Tampa Bay Lightning in Game 5 2-1. This gives them a 3-2 lead in the Final. The odds have been favoring the Blackhawks lately, and they’ll be playing on home turf so this could wrap everything up.

What happened: The Blackhawks broke a 1-1 tie early in the third period and moved within one game of their third Stanley Cup in six seasons Saturday night, continuing to shut down the biggest stars of the Lightning. Oh, much of the attention today will focus on Tampa Bay goaltender Ben Bishop, who returned to play after missing Game 4 and going through several days of speculation. But along the way, the stars of the Lightning have been missing from the score sheet, too. Captain Steven Stamkos has now gone seven games without a goal. Tyler Johnson has scored only one time in his last nine games, and Nikita Kucherov only one in the last seven.

The Blackhawks are beginning to take on the look of a team that has just been in pressurized situations too often for the young Lightning. The first period, for instance, was perhaps Chicago’s finest of the series as they outshot the Lightning 14-5. Tampa Bay got the goal back in the second period, but couldn’t stem the Chicago tide.

The Blackhawks scored their tie-breaking goal with 17:55 to go in the game. Kris Versteeg got off a nice shot on a breakaway, and all Bishop could do was block it.Antoine Vermette poked in the rebound cleanly for the goal. 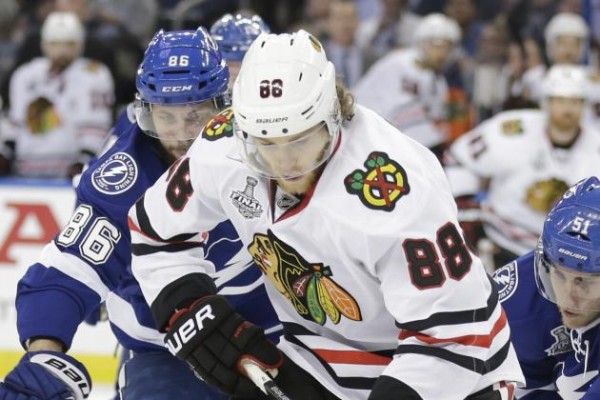 Ben Bishop stood in the crease looking as brave as he could in the third period Saturday as the Chicago Blackhawks mounted another charge toward him. The Blackhawks knew that Bishop, the Tampa Bay Lightning goalie, was dealing with an undisclosed injury, and they had challenged him every chance they could, testing the limits of his will and his tolerance for pain.

Now, Kris Versteeg had picked up a loose puck and created a breakaway. As the Lightning defense caught up to him, Versteeg briefly lost the puck and then slid it toward the crease. Amid the commotion, ice sprayed Bishop’s face. He did all he could to stick out his foot and kick the puck away. But the puck skidded to Antoine Vermette, who rifled in the go-ahead goal.

Bishop dropped his arms to his side in exhaustion, as if to say, oh well. He had been knocked down by his own teammate on Chicago’s first goal. He ended up at the bottom of a pile after another scrum in front of the net. He slid, kicked and dived, expending all his energy to finish with 27 saves and give the Lightning a chance to win.

The difference between the two teams was, perhaps, that the Blackhawks had the healthier goalie. Behind Corey Crawford and his 31 saves, Chicago beat Tampa Bay, 2-1, in Game 5 of the Stanley Cup finals, on the Lightning’s home ice. The Cup will be on hand Monday, for Game 6, back in Chicago.

“This is not near over,” Lightning Coach Jon Cooper said.

And it was hard not to believe him. This has been the closest finals in 64 years, with the first five games being decided by one goal each. Every goal is precious, every save a near miracle. That is why Bishop’s health has been so important.

He looked noticeably hurt during Game 3, but the Lightning won. He missed Game 4, and the Lightning lost, and in the days after, the Lightning had kept his status a secret. So when Bishop took the ice for the morning skate, reporters watched his every move.

“There’s progress being made,” Bishop said, repeating that line or some variation of it three more times throughout his morning news conference. He refused to go into any further detail.

But the Blackhawks seemed to sense that he was weakened. They started the game firing shots from a distance, testing Bishop’s mobility. Maybe they could tire him, or catch him off guard. They made nine shots on goal in the first five minutes. They kept firing, kept pressuring Bishop and it led to an easy goal.

The sequence started when the Blackhawks dumped the puck into the offensive zone, trying to create more pressure. The play seemed innocuous enough. Patrick Sharp was the only Blackhawk there to give chase, and only Victor Hedman was there between Sharp and the puck, looking over his shoulder, shielding him.

But Bishop had wandered away from the crease, about 30 feet from the net, in an attempt to clear the puck. Bishop saw Hedman and yelled at him, thinking he would back off, but Hedman could not hear him over the crowd. They collided, and Bishop lay in a heap. Sharp collected the puck and scored on the empty net.

Bishop lay on the ice, then slowly got up. When he retreated to the crease, a Lightning staff member came to check on him. Yet Bishop stayed in.

“I feel better,” Bishop said after the game, without elaborating.

This was how goals have been scored most of the series. The games are so tight that no star has had a breakout game — just hustle plays and hard-earned bounces. Neither Steven Stamkos nor Patrick Kane has scored; Tyler Johnson and Jonathan Toews have one goal apiece. Frustration seems to be mounting.

“We’ve been right there,” Stamkos said, sitting at his locker with a cut on his nose. “It’s just, we’ve got to push a little deeper and find a way.”

All that physicality that was choking off the open ice also cost the Lightning one of their better scorers. In the first period, after Crawford turned the puck over to Nikita Kucherov and left the net empty, he dived into Kucherov’s path, sent him flying into the post headfirst, and saved a goal. But Kucherov did not return.

“It wasn’t a smart play,” Crawford said. “But luckily it just didn’t go in the net.”

Even without Kucherov, the Lightning played with more urgency in the second period and worked the Blackhawks’ defense, until Jason Garrison made a cross-ice pass through five tired defenders, to Valtteri Filppula, who ripped home a goal.

Once Vermette scored two minutes into the third, the Blackhawks sank back into their zone as the Lightning crashed the net. Each time they were turned away by Crawford, their desperation grew. When the final whistle blew, that pent-up energy led to a skirmish. Then the Blackhawks huddled around Crawford to celebrate.

Asked if he would be ready for Game 6, Bishop said, “Hope so.”