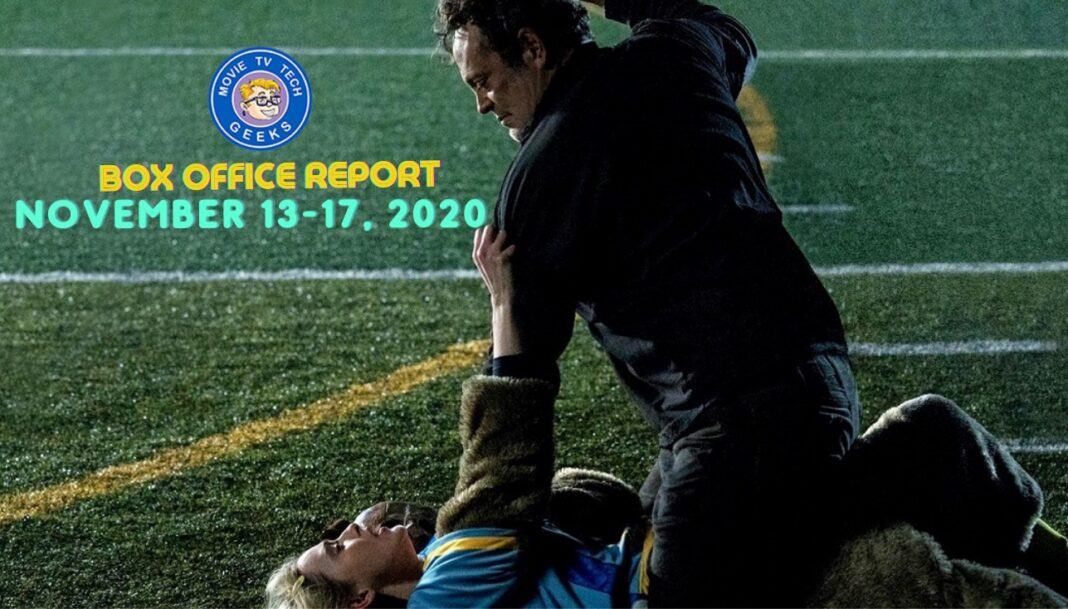 It’s been a while since Vince Vaughn has topped the box office charts, but you can be sure both he, Universal Pictures, and Blumhouse Productions wished their “Freaky” had changed their release date. Film brought in $3.6 million which was on the far lower end of expectations after theaters shut down in various markets due to the pandemic.

Major markets, San Diego and Sacramento were forced to reclose after a surge in COVID-19 cases resurfaced across the United States. This led to health warnings from authorities urging people to stay home.

Currently 47.7 percent of theaters in the United States are open, which is a drop from 50 percent last month. As the pandemic is creeping up to 200,000 cases per day, you can expect the number to drop further. A recent Yahoo Finance-Harris Poll showed that among 1,022 U.S. adults, 81 percent said they hadn’t been to a movie theater since before March 2020 when widespread lockdowns began.

This data alone should have sent shivers down Hollywood’s back as it shows that even just reopening theaters hasn’t been enough. The meager box office numbers alone have shown that, but many Americans are reluctant to even contemplate going to the theater in 2021. 25 percent said that since fewer new movies were being shown in theaters now, they felt that would give them less reason to go next year. Both the virus and movie studios have a hand in this dropoff as more movies have been postponed like James Bond “No Time To Die,” and “Wonder Woman 1984.”

Jim Orr, Universal’s president of domestic distribution, said “Freaky” should have a long life in theaters since it won’t have much competition. That’s been the case with many pandemic-era releases.

“It’ll have much longer legs than the horror genre might normally produce,” Orr said. He praised the studio’s collaboration Blumhouse, known for making thrillers with responsible budgets. “Christopher Landon has an amazing touch for these films,” Orr adds. “He can blend horror and comedy like no other.”

“I think a combination of factors continues to make this a very challenging marketplace for theatrical releases and, as I’ve been saying all along, the fact that new movies have at least been drawing audiences (albeit in understandably small numbers) to theaters shows that there is still a desire for many consumers to get outside of the house for some sort of ‘normal’ activity,” says Comscore’s Paul Dergarabedian in discussing “Freaky’s” debut.

Compared to rival studios, Universal has been active in releasing movies during the pandemic, largely because of a deal it forged with AMC Theatres. Typically, movies play on the big screen for 75 to 90 days before they move to digital rental services. But under Universal and AMC’s new agreement, the studio can put new films on premium video-on-demand within 17 days of their theatrical debuts. In return, AMC, which is the biggest cinema chain in the world, promises not to boycott Universal’s movies and also gets a cut of the digital profits.

Of course, Universal has kept to opening smaller and less financially risky titles given the unstable movie market, and plans to save its biggest tentpoles — like “Fast and Furious” sequel “F9” and “Jurassic World: Dominion” — until moviegoing returns to a more significant degree and coronavirus cases are better under control. In any case, the recent crop of Universal movies provides theater owners, many of whom are desperate for fresh product to offer, something new to populate their marquees. In the next few weeks, Universal is unveiling the animated adventure “The Croods: A New Age” on Nov. 25 and the Tom Hanks-led Western “News of the World” on Dec. 25. And Focus Features, Universal’s specialty label, is offering “Promising Young Woman” on Christmas Day.

Cinemark Gets Similar Deal With Universal

Universal struck another similar deal with major theater chain Cinemark to shorten the theatrical window from three months to 17 days. The two announced the deal on Monday that it’s a multiyear agreement that guarantees three full weekends (17 days) of theatrical exclusivity for Universal and Focus Features titles before a film can become available to rent on demand.

Films that open to $50 million or more will remain in theaters exclusively for at least five full weekends or 31 days. Those numbers haven’t been seen in quite some time. Universal is the only major studio to reach these kind of agreements as most have stuck to the standard 90-day theatrical window. As the pandemic rages through the holiday season, you can expect the others to follow suit.

Industry observers have been curious as to how the pact would benefit theater operators. Universal and AMC have yet to share any specific numbers. However, AMC said recently that unlike other struggling theater chains, it would not have to close back down amid the coronavirus crisis due to the Universal deal.

“Anything that encourages studios to release more films into theaters is a good thing,” said Paul Dergarabedian, a senior media analyst with Comscore. “These measures, while seen as controversial to some, are a stepping-stone on the path to keeping more theaters open, then they may be (at least for now) measures worth taking.”

“Let Him Go,” from Focus Features’ landed the second place spot on the box office charts. The suspense thriller starring Kevin Costner and Diane Lane, brought in $1.8 million in its second week, bringing it’s tally to $6.8 million. “Come Play,” another Focus horror film came in fourth place with $1.1 million. The film has brought in $7.3 million in three weeks playing in theaters.

The War With Grandpa

“The War With Grandpa, Robert De Niro’s family comedy came in third with $1.3 million in six weeks of release. The film has grossed $15.2 million. “Ammonite” was the new entry in theaters this past weekend starring Kate Winslet and Saoirse Ronan. The well-reviewed romantic drama played on 280 screens and brought in $85,000 averaging $305 per location.

Everyone is watching “Wonder Woman 1984,” closely to see if it will move to streaming or just push off until Summer 2021. With New York and Los Angeles out of operation and Europe closing down with new lockdown measures, 2020 looks to be done and dusted with new blockbusters.

As David Gross predicted, “Can the market support a blockbuster? Not yet.

Estimated ticket sales for Friday through Sunday at U.S. and Canadian theaters, according to Comscore. Box office number courtesy of Box Office Mojo.