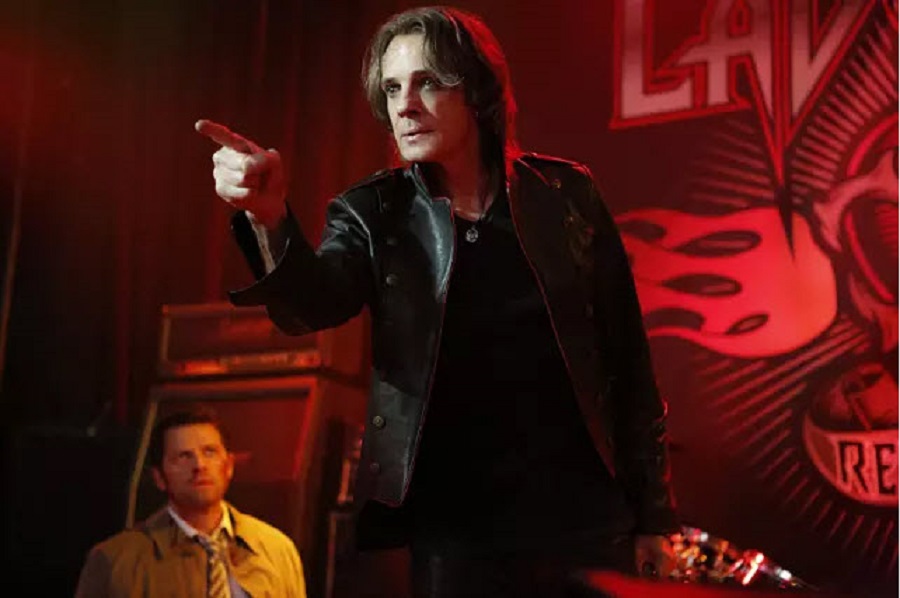 Headline: Vince Vincente Found Dead. If this were real, the news report won’t go into details as to why the body is desiccated and why the rest of his band have broken necks. The FBI is sure to send Mulder and Scully types to look into this. Now, imagine if the government was actually not as clueless as we thought? That could be something for another season.

But back to the show, Supernatural temporarily ditches its renewed MOTW format to return to one of its main arcs–How do you solve a problem like Lucifer-at-large? Rock Never Dies is a pretty cool episode which gives us back the fearless foursome of Sam, Dean, Castiel and Crowley. It’s still amazing to think of two hunters, an angel and a demon solving crimes made by The Devil. Rowena was unfortunately a no-show but she always knows to show up when she’s on the winning side. More on that later. Just when we thought Rick Springfield’s role as Vince Vincente/Lucifer was cut short when Rowena sent his decaying corpse to the bottom of the ocean, he’s back, fulfilling the show’s promise of Lucifer’s new quest for fame and worship.  It’s nice that shows like Supernatural hold up their ends. How did they pull this off when they seemingly wrote themselves in a corner?

Apparently, even angels shed their feathers while watching over the earth for millions of years. Lucifer’s fossilized feather, embedded in a rock found its way in the hands of a couple of Satanist douches who sought to summon the devil himself. How such lore was built up over a fossilized feather which could have belonged to any bird is quite out there. There have been legends of previous human histories apart from ours. Let’s call it the Third Earth theory wherein we are already in an nth iteration of human history. Humans obliterated themselves over and over and only small traces of previous histories made their way into ours in the form of stories and old world medicine.

Back to the douchebags, their summons work and Lucifer appears, kills one of them, uses the feather to rejuvenate himself and kills the other one but not before he recognizes the vessel as kind-of-famous rocker Vince Vincente which gives Lucifer an idea about his vessel. Not that he already knew what Vince Vincente actually was as he was more focused on getting a vessel he can occupy for more than a few minutes.

We then switch over to Dean playing Words with Friends with his mom who seems to be getting a grip on technology and giving Dean a sort-of bonding time. Sam finds trouble in believing Mary is already into tech until they get an alert that the Vince Vincente vessel is back despite Rowena’s spell. Vince announces the comeback of his band Ladyheart to the public and nowadays, band reunions are often a big thing. The brothers contact Cas and Crowley about this and decide to meet up in LA. This is one of those instances where the show shoots elsewhere but Canada (did they?). 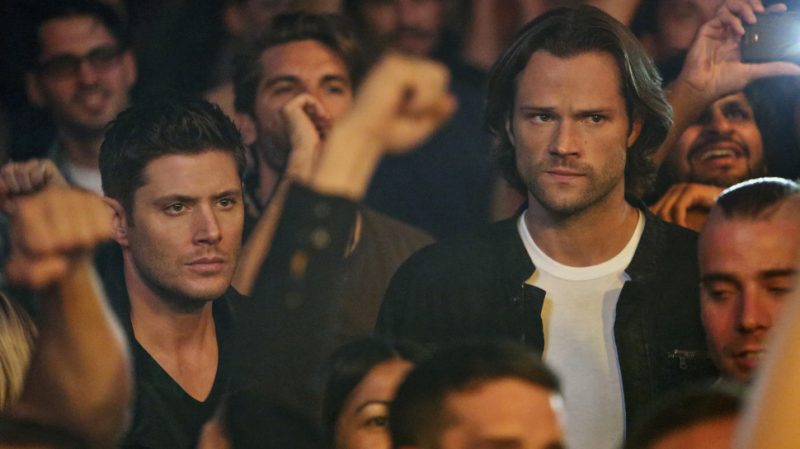 Crowley visits an all-too-human agent named Russell in LA to ask him about Vince. He’s human as he didn’t recognize Vince for what he is. We then switch to Sam and Dean on their way to LA. Sam pretends to be doing podcast research but Dean finds out Sam was listening to Ladyheart’s brand of Hair/Glam Rock—a type of Rock Dean detests. Sam turns it up to annoy him. We head back to LA to a recording studio where Ladyheart band mate Tommy is urging Vince to actually record something. Vince/Lucifer however is not interested and is instead preoccupied with the concept of fame and the resulting adoration. Something seemingly alien as actual love for the devil was limited back then to a few miscreants. Lucifer sees music as but an excuse to idolatry. Tommy, who knows what’s going on is trying to play along but is disillusioned as being quite the artist of the bunch.

The brothers meet with Crowley and Cas and they begin their investigation by checking out Vince’s hotel room and wondering why Lucifer hasn’t made a move against heaven or hell. They find a human tooth in the restroom which seemed to belong to one of Vince’s longtime fans who is later seen alone with Vince. Vince then decides to test the limits of what humans will go through for their idols. The woman cuts Vince’s full name on her chest ending up in a hospital, later visited by the foursome where they find out she did it out of devotion and not mind control. That devotion is what Vince wants more of from his manager urging her to get him a fresh fanbase for Ladyheart.

Crowley then goes to Russell to find out where Vince’s next show is but the show’s location remained secret to Russell up ‘til then. Castiel goes to Tommy but also ends up short. The same with Sam and Dean when they pretended to be rockers to cozy up to Vince’s female PR manager. Because they’re in LA according to Crowley where people won’t do the right thing.

Vince and team meet outside a bar in a limo wherein Russell, still oblivious of the true Vince chides him on not performing to expectations and goes on how managers are supposed to own their talents. Vince doesn’t like it and kills him in front of Tommy and the PR. PR lady quits as soon as they’re outside the Limo while Vince is basking in the cameras. Tommy decides to text Castiel the show’s location. They decide to go at it with Lucifer despite them being outgunned. Cas and Crowley tell the brothers they’ll try to stall Lucifer no matter how short they’ll last.

Inside, Lucifer/Vince decides to kill the two other Ladyheart members to hog the limelight all to himself but before he could kill Tommy, he’s stopped by Castiel. Here we see Lucifer do his Mark Pellegrino impression upon seeing Crowley. Sam and Dean meanwhile are having trouble making their way backstage in hopes of surprising Lucifer while the other two keep him busy. Lucifer decides to reveal his motivations. He actually has none and is just lashing out, seeking fame as a distraction and idolatry as a new form of love and worship away from his Judeo-Christian history. Lucifer kills Tommy before he gets away and fights Crowley and Cas. Instead of killing Crowley outright, he beats him with a guitar.

Vince manages to get onstage and promises a ‘messy’ show to his adoring fans. Dean decides to fire his gun to get the people out. Sam tries to keep the doors open until the four of them are alone with Lucifer. Dean cuffs Lucifer with Enochian cuffs but they turn out to be useless. Lucifer says he can end them all but tells them about God abandoned him again after their reconciliation feeling like a small kid left alone by his parents in a crowded mall where all the attractions and displays become meaningless. That is pretty relatable and a cause for concern. It’s actually quite a parallel to Dean’s situation wherein he finds his mom again only for her to get some alone time and leaving him again. The show will probably use it in a future episode. Lucifer now wants to fill that void by doing what he does best causing chaos and harm to the world and telling them while his vessel self-destructs. He may actually be too weak to destroy them but doesn’t admit it. Lucifer smokes out leaving a desiccated Vince corpse.

The team meets outside discussing what happened which Dean describes as a win but Sam doesn’t agree. They are losing slowly because Lucifer will continue to lash out and have fun while he’s out there. While he is, things are going to get worse. The show ends with Dean telling them that they’re going to stop Lucifer, somehow.

It’s fun seeing Sam, Dean, Cas and Crowley work together again. Crowley seems to be back to being a more humanized and sympathetic character. He shrugs off everyone else’s condescension as he’s a demon to be hated after all but he seeks to prove his worth by helping for what his one second is worth in fighting Lucifer. Dean shows his appreciation in seeing Crowley’s battered meat suit. Lucifer is being sympatico himself. Several times in the show that they’ve depicted him as being a petulant child of God, seeking for attention instead of the very wise and dangerous Devil himself and they’ve so far been consistent. There’s not too much Sam and Dean in this episode. It’s Lucifer’s show. This time, he sheds his being biblical. Like a child seeking his own identity, he becomes a major supernatural threat on his own. Rick Springfield really delivered this time even down to that Pellegrino snark at Crowley. Shame he didn’t get to sing as it’s supposed to be about a rock star. Had no problem re-watching this episode on the phone for recap and analysis and sure as hell you won’t either.

Check out next week’s sneak trailer tease for Supernatural Lotus 1208.