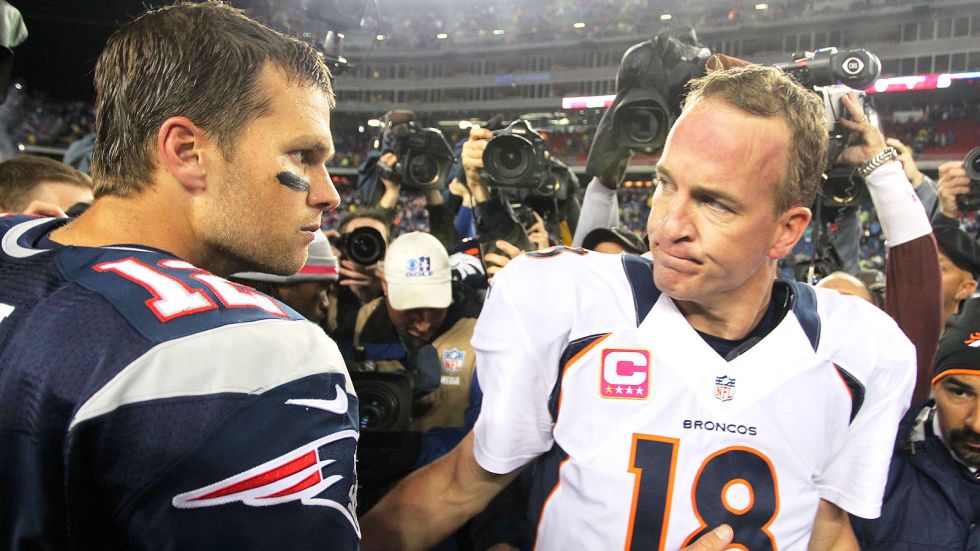 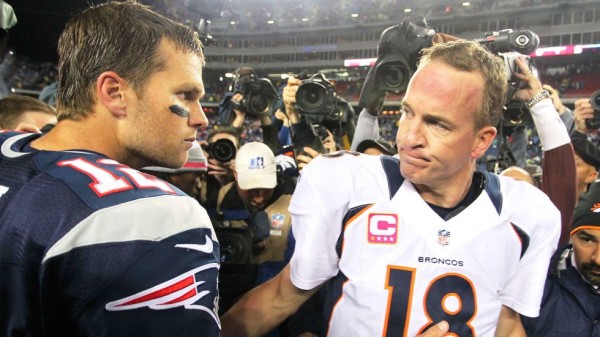 Tom Brady and Peyton Manning will face off for what may be the last time in this Sunday’s highly anticipated AFC Championship game. This will be the 17th meeting of the future hall-of-famers, with Brady holding an 11-5 head-to-head record. However, the quarterbacks are tied at 2-2 in the postseason.

It’s yet another installment of an epic quarterback rivalry that’s enthralled NFL fans since 2000. Brady leads the series 11-5, but they’re 2-2 against each other in the playoffs. Most recently, Manning has had the upper hand; the last two times he faced New England in the playoffs, Manning emerged victorious.

Brady and Manning are surefire locks for the Pro Football Hall of Fame. One or the other has represented the AFC in nine of the past 14 Super Bowls, earning Super Bowl MVP honors in four of those contests.

“I think playing someone 17 times is pretty cool, especially someone as great as him,” Brady said Wednesday. “To play against those Peyton Manning-led teams, you know you’ve got to play 60 minutes, and you’re going to be in for a tough game, and they’re going to take advantage of opportunities that they get.”

It’s a thrill for the players and coaches around them, too.

“You have two great quarterbacks that are at the pinnacle parts of their careers, and they’ve been so consistent from the adversity that they’ve been through, throughout their whole career,” Broncos outside linebacker DeMarcus Ware said Wednesday. “Now, the clash of the titans is here again. You have an opportunity — when you’re a young kid, you watch those games, or you play them on the video games, but now you’re on the field with those guys. You’re getting that roar from the crowd, or you’re getting that feeling from the next teammate beside you. That next teammate, for me, is Peyton. I think that’s a big, monumental thing for me. I’m really excited to be playing this week and be part of this experience.”

But is Brady vs. Manning XVII the last time fans — and their teammates — will get to see this legendary rivalry?

This year just feels a little different. Manning turns 40 in March. Brady is 38. And while Brady’s numbers are as good as they’ve ever been, the future looks uncertain for Manning. Manning hasn’t revealed his future plans, but there has been wide speculation that this season could be his last.

“I have felt very fortunate to play 18 years like I have, and I know how hard I’ve worked to play this long,” Manning said Wednesday. “When I look across at the New England Patriots and see Tom Brady is their quarterback, I just know how hard he’s worked, as well. To play as well as he has over the course of his career, with the success that he has had and the team’s success, I have a lot of respect for him. He’s earned that respect. He and (Patriots head coach) Bill Belichick have earned all the respect and all of the accolades that they get.”

Ranging from respect to drama, here’s a snapshot on what this Brady-Manning rivalry includes.

Below are visualizations comparing the two quarterbacks this season and over their careers, and showing their firmly held spots in the stat rankings as all-time greats.

It’s inevitable: Manning and Brady have to retire eventually. Could this season be Manning’s last?

His mind is as sharp as ever, but Manning’s numbers have dropped, and his health and arm strength have been concerns. He was removed from a game against the Kansas City Chiefs in Week 10 in favor of backup Brock Osweiler. He missed six games this season with a partially torn plantar fascia in his left heel. In fact, football fans were robbed of what should have been Brady vs. Manning XVII in November, when Manning was sidelined with the injury. Instead, it was Osweiler who directed the Broncos to a 30-24 win in overtime.

“There’s nobody that has more respect for Peyton than me, outside of probably his parents and his brothers,” Brady said ahead of that November game. “If anybody can appreciate what he’s accomplished, it’s me, so he’s just been remarkable in every part of his career. He’s been a tremendous player.”

Brady, meanwhile, said earlier this season that he’d like to play “maybe ten more years.” That’s likely a stretch, but the 38-year-old has been playing some of the best football of his career. In his 16th season, Brady threw for 4,770 yards and 36 touchdowns in the regular season and is one of the front-runners for NFL MVP.

“There have been a lot of different players that have played in 16 of those games but as the quarterback, it’s always been a great honor and privilege to have competed against him that many times over the course of the past 16, 17 years he and I have been in the league together.”

Manning isn’t carrying the Broncos this season; their defense is. However, it’s only fitting — especially if it’s the last time — to see Brady vs. Manning on this stage when the two take the field Sunday.

“It’s a credit to both of them, because you don’t have the rivalry that they’ve had if you don’t last as long as both of them have lasted,” Broncos head coach Gary Kubiak said Wednesday. “They’ve both been so successful. They’re two Hall of Fame football players, two Hall of Fame people. They’re leaders on their football team wherever they’ve been — Peyton has been a couple of places. It’s pretty special.”