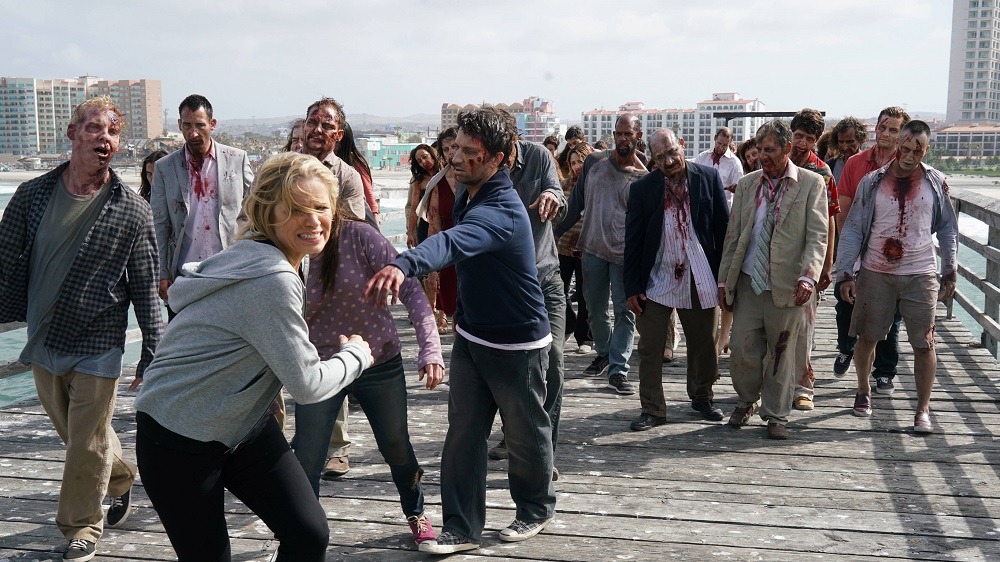 “Fear the Walking Dead” Alicia’s pied piper plan went better than the similar tactic used by the survivors on the original “ The Walking Dead.”

For now anyways. But the tide always comes back in. So the hotel survivors may have just delayed the inevitable and will eventually have to deal with soggy walkers.

We saw one romance end with the help of Victor and one begin with Nick and Luciana. Though the new marriage that Victor ended was on the rocks anyway since the groom didn’t find his zombified bride that tempting on their wedding night.

The episode opened with a flashback of  Maddie and Victor fighting their way through a bar full of walkers. It would have made Ernest Hemingway proud, the way they handled the bar fight while trashed.

The flashback ended with she and Victor getting rehydrated and letting Alicia and her new friends into the safe room with them.

Memo to Maddie: Keep some Pedialyte around or Vitamin Water if you plan on drinking heavily while on walker vacation at the hotel.

What’s Nick up to at the colony while his family is trying to get the walkers to check out of the seaside hotel? He is using his drug knowledge to create some extra drugs by cutting the potency down. This isn’t genius, but he does show his desire to help the situation.

And the pharmacist, Alejandro appreciates the boy’s effort. The two also have a conversation about Nick not believing the “bitten and lived to tell about it” story that Luciana told Nick.

Nick has no faith. 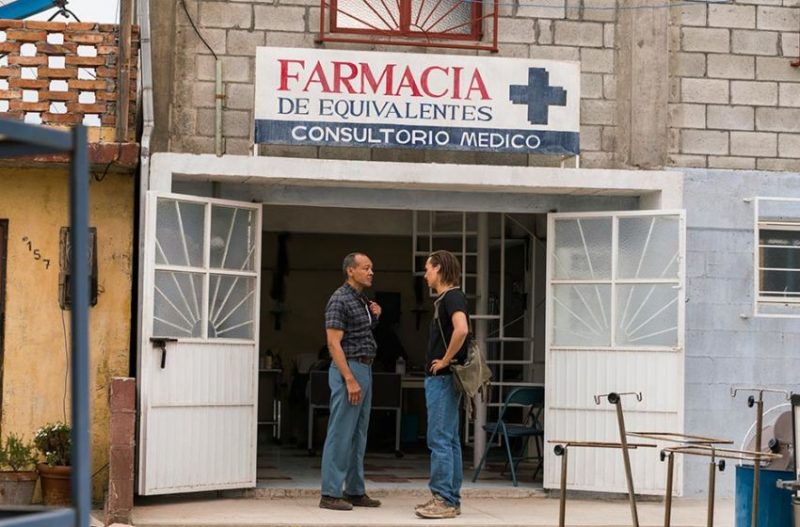 While Nick is getting prepped to take advantage of those poor drug dealers at the Food Mart, Maddie is trying to broker a peace treaty between the hotel manager and the group that hates her. Maddie sees the value of the hotel and all the food stockpiles there. She needs these two factions to come together, though.

If not she warns them that some other “asshole” will come along soon enough and take the place away from all of them. Maddie is getting better at surviving and seeing what’s ahead.

However, I would ask what Rick Grimes would do in this situation. I think he would force the other faction out of the hotel or kill them when they wouldn’t go.

Maddie makes headway when she states her case to Oscar, of the wedding party faction. He says the bride’s mother will never go along, but he hands over the keys to the hotel to Maddie.

While Maddie plays diplomat, Nick makes a successful swap with the drug / loaf bread kingpins. He also hears how Alejandro got bit. The guy was trying to help a drug addict who has high and got mistaken for a walker. That resulted in the pharmacist getting bitten. But he survived and of course never turned.

That’s his story, and he’s sticking to it.

We see a bloodied guy show up and tell of Luciana’s brother Pablo being found torn to pieces. RIP dude.

This grief, while terrible, does lead to some romance between Luciana and Nick later on. He is trying to learn Spanish and even though he can’t spit any mad game in her native language, the effort was enough to get her to stay the night with him. 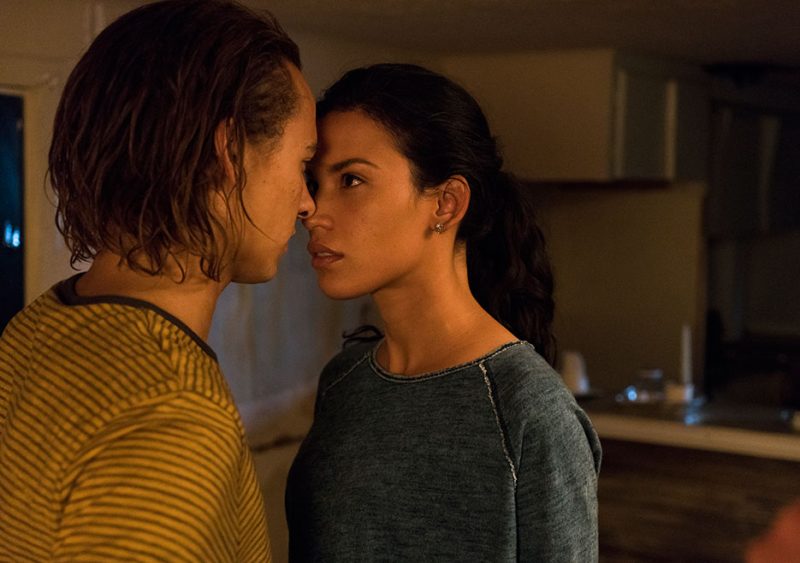 If she was testing him, as Nick thought, it was a great test! 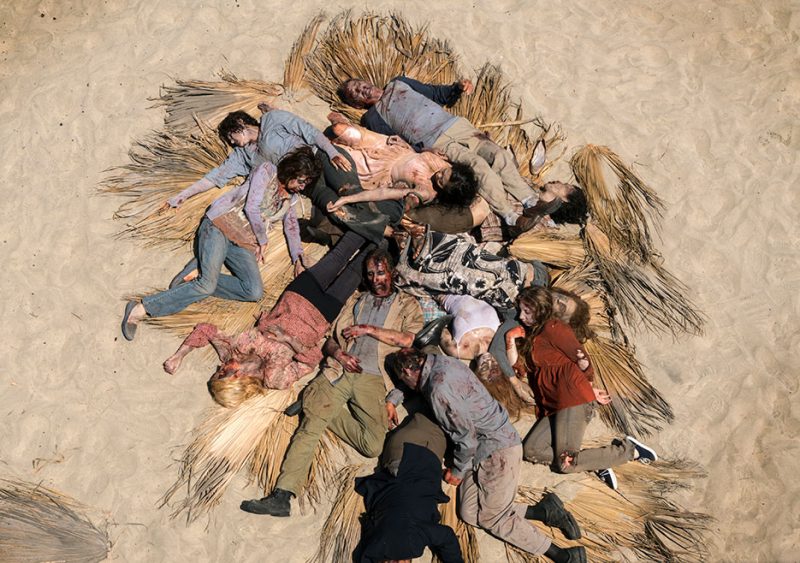 The clearing process is a lot of work, so Alicia comes up with the pied piper method of leading the walkers into the ocean. The riptide should carry them out to sea. That’s the idea anyway. 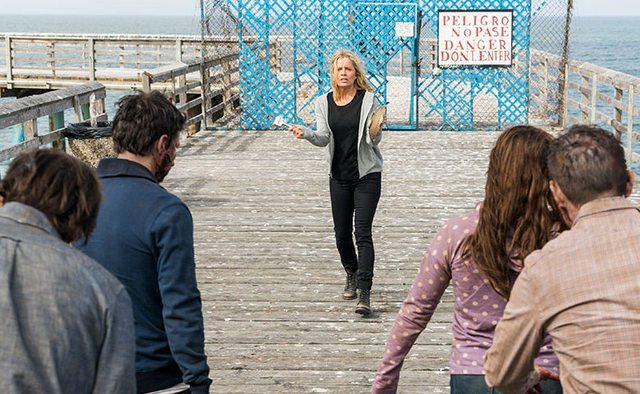 But as I said, it seems likely all these sun worshiping zombies will eventually wash back up on the beach.

The plan has Maddie leading the rotters onto the pier, and she will jump into the rough water as they hopefully follow.

It worked even though it looked like Alicia may never get the boat out to her mom before she drowns herself.

It was a cool scene. There’s something about walkers falling from heights that amuses me. The falls can’t kill them, so it’s comically brave of the mindless creatures to keep pushing forward no matter what’s below them.

With all the walkers checked out of the hotel, it’s time for a victory dinner. But not everyone is on board. The groom, Oscar, and his mother-in-law skip the dinner.

Victor offers to mend the fences and excuses himself from the dinner.

Strand is a smooth operator with a heart. So it takes him only a couple minutes to convince Oscar that his bride is suffering and that Victor can put her out of her misery. Besides supper is getting cold my man!

Oscar finally agrees, and Strand does what Oscar should have done long ago. Other fish in the sea buddy. Lots of them are walkers too though after Maddie lead them to jump. 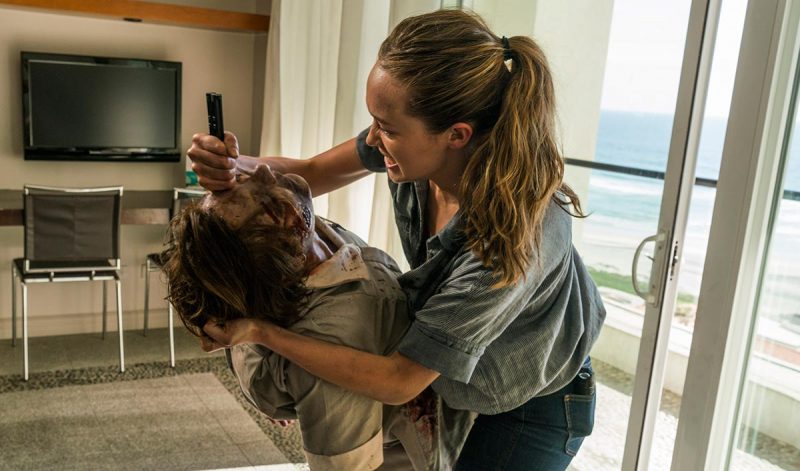 This episode was a good one and showed that the pied piper method can work. It would have worked in TWD too, if not for the truck horn set off by the Wolves.

See ya next week as we are building toward a maw-in-law attack on Elena. It’s going to happen, trust me.