If you ever do live to see a zombie apocalypse as in “Fear the Walking Dead,” just know that any group that survives will have its quirks. You will not find a community of accountants who are all level headed. The normal folks will have already been eaten or turned into walkers themselves.

Just think of all the groups that actually thrive on the original “Walking Dead” and now on “Fear the Walking Dead.” These groups that form villages are full of crazy ideas, but they live in a crazy world so maybe that’s why they remain alive.

Nick’s new home is full of people who might as well be called a cult. They are following the pharmacist’s ideas about the dead just rising up to clean up the world. And they are even sacrificing their own people on a regular basis. Pretty damn scary, especially for newcomers like Nick, who would be near the top of the sacrificial list. 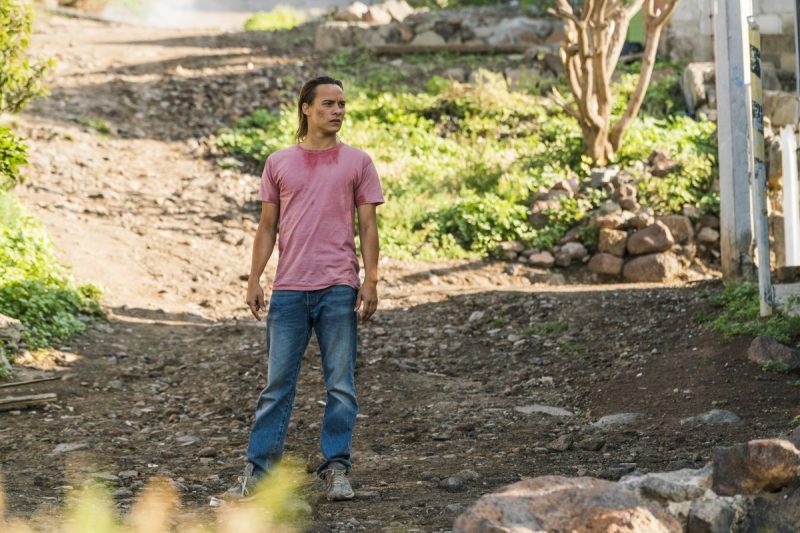 Nick starts this episode out with the fearsome lady warrior Luciana. They use the walker blood as camo and head to the grocery store. No clean Publix available so they have to go to the only store open to the public, and it’s run by some enterprising drug dealers.

This store has a decent supply of food on the shelves, but it won’t last forever. Luciana is trading drugs for the chance to get food and water….mostly water.

It was a quick trip and went well until Nick got called out by one of the gun-toting bag boys. Using expired coupons maybe?

Nope, Nick the genius thought he could get away with shoplifting.

Wrong. And it almost cost him his hands via machete. But once again his addiction proves to be helpful in surviving. He tells the head of the operation that he knows his sister is an addict, and he can make sure the Oxy keeps coming.

This tactic actually works, but it seems like the drug dealers could just take him and Luciana hostage, then go get all the Oxy they want. But I guess running the food market is more important at the moment.

While Nick tries to figure out how to fit in with his new cult, Maddie and her crew are searching for him. She’s still with Victor, Ofelia, and Alicia. We saw nothing from Travis and Chris for the second week straight.

Hopefully, Chris is dead by now.

Victor desperately wants to get back to the Abigail and Alicia is tired of being an afterthought to her mom every time Nick disappears. Bad news for those viewers who liked the yacht plot on FTWD.

Maybe leaving someone there to guard the precious vessel would have been a good idea. I know, hindsight is 20/20.

This episode was a bit of a pity party. We saw Ofelia get depressed when she and Alicia saw the worst suicide attempt in history in the hotel. Who hangs themselves from a shower head? Must be the strongest pipes on the planet in that hotel.

Maddie and Victor have a nice conversation at the bar even though there’s no real world to talk about like they could have in the past. They toast to “false hope” after Maddie tells Victor that her ex-husband was a drunk that ended up dead as a result of driving while sloshed. 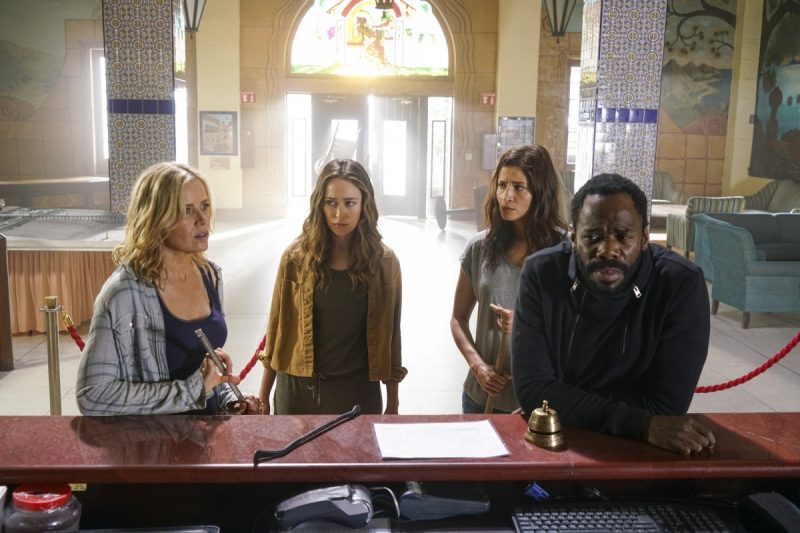 Maddie was pretty entertaining for the first few drinks then things turned dark. Victor couldn’t really settle her down so what’s he do? Starts playing the piano. A really out of tune piano. This, of course, draws all the walkers to them from the surrounding areas.

Fighting off walkers while you’re drunk can’t be easy. And by the end of this episode, Maddie and Victor are surrounded by zombies at the bar. I see Molotov cocktails as their only way out next week.

The walkers falling off the balconies was very cool. Fall 20 stories and just get up and keep moving. That would be a great way to get to the beach during a crowded summer vacation. Elevators eat up a lot of time at the beach.

While Victor is making it rain zombies, Nick is shown to be a hero once again as he gives the stolen candy to the little girl who saw her father eaten like a pizza when he was sacrificed. Nick chats with the pharmacist about the leader’s theories on death.

“This is a test. The faithful will remain after this ends,” he tells Nick.

Nick has his doubts but does see the bite on the man’s neck that Luciana mentioned. Was he really bitten by a walker and somehow cured?

Not likely. Dude was probably attacked by an angry senior citizen back when he was working a Walgreen’s counter.

But he has his people believing in his words and gives a rousing sermon at the end of the show. Nick even gets into it. Maybe it’s to blend in, or he is starting to believe in the leader and his theories.

Nick can jump in with both feet with this cult if he wants. Or he can just play along to get along. But the most important thing he has to do is avoid being sent to the back of that bus as a love offering to the walkers.

Three takeaways from episode nine of Fear the Walking Dead:

– FTWD is turning into a Spanish version of TWD.

– We’ve seen the last of the Abigail. No way they get lucky and get it back.

– Drug dealers are enterprising fellows even when the world is upside down. Food is now a hard to get item, so they simply changed products.