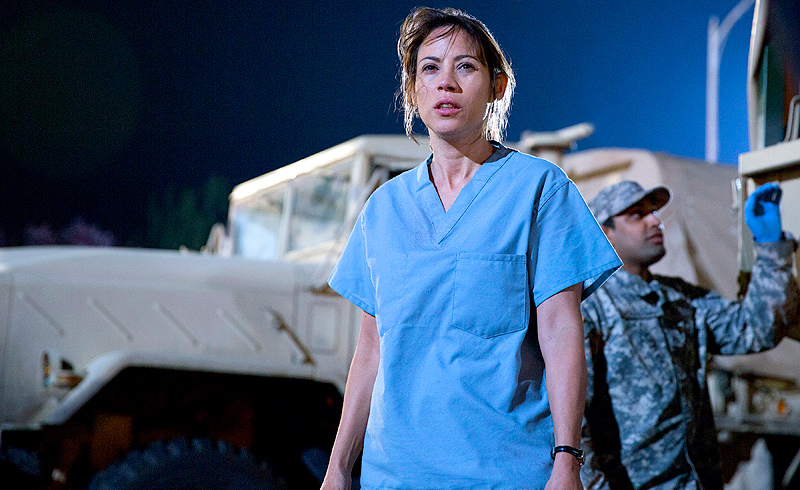 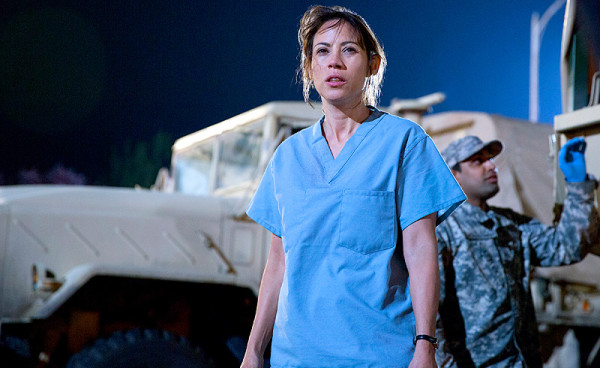 Darkness was a great opening for the finale of the first season of Fear the Walking Dead. The city was without light except for random spots and of course a few fires. We see Travis and crew making the right choice to get the hell out of the gated subdivision. As they drive freely through the abandoned military checkpoint, they are headed into more danger even though they are out from under martial law.

The finale is full of characters being more true to their nature. Daniel wants to kill off the soldier he has already tortured for intel, but Travis saves him and eventually frees the guy. Sales guy Victor Strand is cool with leaving behind other prisoners as he and Nick make their escape.

And there’s Daniel, the pied piper of the dead. This iceman cooly walks up to the military compound leading the walkers he set free from the arena . Great plan with the only weapon at his disposal. Travis would never try such a stunt…too cautious. Daniel plans to save his family by any means necessary.

Daniel is super pissed that Travis freed the prisoner and tells him, “See what the right thing gets you.”

It was interesting to see the teenagers, Alicia and Chris still being coddled as they were told to wait in the car while the adults headed into the compound to retrieve Nick and Liza. That’s a sharp contrast when compared to Carl in the original WD series. The coddling doesn’t help though since they get carjacked by a few military guys and Chris gets KO’d for his trouble.

If I were flying a giant chopper I would not land if I knew there were thousands of infected at the gates. That’s exactly what happened as Dr. Ezner saw the pilot turn the helicopter around and head to safety. You could see the loss of hope written all over her face. There was no hope for those she was caring for that could not move on their own. I had a feeling the cattle executioner was going to come into play.

Liza had her chance to get on a truck that was headed out, but chose to stay so she could join up with her family. The scene around her was awful though and I wonder how long she will live to regret that decision.

Maddie can’t be talked out of freeing as many prisoners as she can with her handy bolt cutters. She and the rest of the tribe search for Nick and Liza, while Nick and Strand are looking for a way out themselves. Strand is just evil or very conservative with his bullets. He chooses not to mercifully cap the army leader (soon to be walker) who was going to be his ride out of this hell hole.

Lucky for Strand and Nick, Liza chose to hang around since she swiped the doors open to save these two from an onslaught of cantankerous zombies.

The kitchen scene was as good as any chaotic moment from the original Walking Dead series. Bolt cutters to the head, near bites, and flickering lights made this one hell of a scary few minutes. Watching Daniel’s face as Liza told him about his wife was tough. All that effort and she was already dead.

Once the group finds Dr. Exner, they see the carnage of a hopeless saver of lives who had no choice in her treatment of the patients. The good doc tells them how to get out of the facility, but says, “There’s nowhere to go.” We then see her holding the cattle killer, and we know she offed herself without ever seeing it on the screen.

Maybe the most memorable scene came when Travis and company found their way outside to see the bulldozers in front of mounds of burnt human remains. Ofelia and Daniel got visual confirmation of the death of Mrs. Salazar upon seeing the footless skeleton.

Being “The Good Man” came back to bite Travis when the soldier he freed popped up as they were about to head away in their remaining vehicles. Andrew was pretty upset about the mutilation and all so he goes ahead and shoots his torturer’s daughter! That prompted a Grimes style moment of rage when Travis attacked the soldier and beats his face in like a caveman on meth.

Luckily Ofelia isn’t killed and she will live through the wound according to Liza. The trip to Strand’s home gives us a daytime view of the jacked up city that used to house civilized humans. How quickly it all fell apart.

I don’t know what a real world apocalypse would look like, but I think the speed of the collapse would be the same as in Fear.

Victor Strand is a balling salesman. I don’t know what he sells, but it has made him filthy rich. His home is equipped with generators and is completely intact. I wonder if his business had something to do with the virus that is now turning the world into Zombieland. I’m guessing he is in the pharmaceutical industry, but who knows, maybe it doesn’t turn out to be relevant.

Strand does tell Nick that he must stay in constant motion so they can’t stay there. Seems crazy. If I’m in the tribe, I’m staying put. His home is the nicest place they have seen in quite a while.

Turns out that Abigail is Strand’s yacht. A big boat is a great option in this situation. They could fish for their food, zombies can’t swim, and boats are just cool. Why the boat is not docked is a mystery and I don’t know how Strand plans to get to it.

Finding out Liza has been bitten is no big shock as we have seen this with other characters who find out they will be infected after a dust up with walkers. I did like her character. She was not a nurse officially, but she was a huge help in such a fucked up situation. Asking her ex-husband’s new lady to off her was intriguing in a messed up way.

It ended up being Travis who had to pull the trigger though. I imagined all the thoughts running through their heads as he was about to end the life of the woman he he had married and with whom he had created another human life. All the regrets, the memories of love, the birth of a child, the possibilities, and then….BOOM!

It’s a good thing Travis had his replacement lady at the ready. Maddie comforted her man who just whacked the woman she would not have tolerated had the world not slipped into a zombie hell. So much for my tender moment.

The episode wrapped up with Liza’s death and a shot moving out into the ocean.

The finale was pretty great I must say, even though I watched it from a spotty internet connection due to some downed trees in my neighborhood. No internet, and no TV service is pretty close to a Walking Dead situation for me! I was hoping I wouldn’t have to kill any sick looking neighbors with a set of bolt cutters before I got this recap finished.

I liked the finale’s look in contrast to the original series’ look. Seeing civilization just a few weeks after its demise is different than the almost abandoned look that Rick Grimes sees long after society’s burial.

I’m stoked for next week’s return of the original, which is just what AMC wanted. I don’t know how many seasons they can get out of FEAR before it overlaps too much with WD, but it is a good way to fill time in between seasons on both shows now.