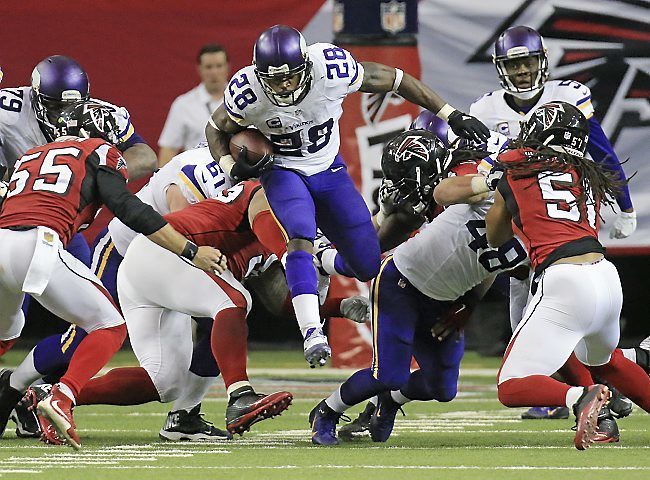 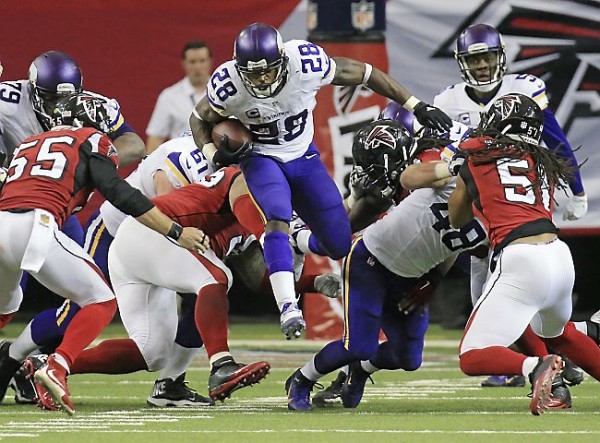 No Devonta Freeman. No Leonard Hankerson. This meant two things. A heavy workload for Julio Jones against the Minnesota Vikings and also less dropped balls due to Hankerson’s absence.

Minnesota came into the Georgia Dome hoping to get back on track after getting lashed by Green Bay last week.

The two teams opened up the game by swapping punts. Atlanta was getting to the oft-sacked Teddy Bridgewater consistently early, but the Vikes’ QB was managing to find his tight ends when he needed a quick option.

Minnesota got on the board first after overcoming a taunting call on rookie sensation Stefon Diggs and an embarrassing drop by Adrian Peterson. The Vikings ended up in the end zone when AP took it in on the ground. 7-0 purple and gold.

On the Falcons’ second offensive drive they kept feeding Tevin Coleman. Freeman’s replacement finally found some daylight after a crushing block by Patrick DiMarco, yet had the most Falconesque thing happen ever. Coleman had the ball dislodged after he broke free for 46 yards and was looking to score. Use the jumbotron my man.

Coleman is now officially diagnosed with fumblitis, a malady that ends many a young runner’s career.

The Vikings were set up with the ball after the turnover and they stayed with the plan to feed AP early and often. They also kept working the ball to the tight ends. The drive ate some clock yet ended with Atlanta’s Ricardo Allen snatching Bridgewater’s pass in the endzone. Birds back in business at their own 20 after the touchback on the pick.

This Falcons drive should have resulted in more points as Minnesota was forced to go with two backup safeties after another injury during the drive. Atlanta settled for a FG with replacement kicker Shayne Graham, who filled in for Matt Bryant who sat out with an injury suffered in practice. The Birds were not helped by a dumb penalty on the sideline by Terron Ward. FG good, 7-3 Vikes still up.

Neither QB exactly made a case for MVP in the first half. Ryan wrapped his team’s two-minute drill up with a typical pick as they neared the red zone. Just another bad throw by Ryan, who now has 11 on the year.

Teddy Bridgewater dinked and dunked his way to a long FG try that was missed by Blair Walsh with two seconds left in the half. The Falcons took a knee which while not exciting was better than bizarro padding the pick stats for Matt Ryan. 7-3 Vikings heading to halftime.

Three points by the Falcons at home!

Atlanta opened up the second half with the ball. The Birds began stretching the field a bit and Tevin Coleman was running hard while holding the ball a bit tighter. The home team appeared to be rolling when Coleman took the ball in from a yard out to score, only to have it nullified by a questionable clipping call. A series of ugly play calls and a Vikings’ penalty led to a couple minutes of ‘how not to play pro ball.’ The drive ended with, I’m not making this shit up, Matt Ryan throwing an interception in the end zone to Terence Newman.

Ryan’s picks are not ones that could be prevented by his receivers turning into defenders. The Falcons leader is throwing balls right to defenders as if he were a rookie. Incomprehensible.

The Vikings took over after the Ryan turnover and turned the pick into three points after getting conservative near the red zone. Vikings 10-3 and in good shape despite the commentators saying the “Falcons have to feel pretty good only being down seven.” I have no idea why Atlanta would feel good about their team in any way.

Four plays and out for Atlanta and they punt it back. Julio has three catches for just 36 yards to this point.

Minnesota added to their lead with a 39-yard field goal making it a two-score game with 6:24 left to go. AP ate up most of the drive as he showed why he’s averaging a league-best 8.1 yards per carry in the fourth quarter. 13-3 Vikes in Atlanta’s house.

Atlanta got a big return by Eric Weems to set them up in good field position at their 39. The drive went nowhere as the ATL looked sluggish and clueless. Tevin Coleman dropped a long ball on the sideline then the drive ended on fourth down with a quick sack of Matt Ryan.

The Vikings wasted no time as AP went 35 yards to score making the game out of reach at 20-3. Peterson now sits on 99 touchdowns for his career.

Atlanta got a too little too late TD on a catch from Nick Williams to make it 20-10 Vikings. The onside kick fails and Minnesota runs the clock out.

Things are bad, but let’s not get stupid.

Not the most exciting first half ever.

Matty Ice just can’t help himself and leads the league in a dubious stat column.

Fourth red zone interception for Matt Ryan this season leads the NFL, according to @ESPNStatsInfo

Not a compliment in case anyone is wondering.

Matt Ryan is Jay Cutler and Alex Smith wrapped into one