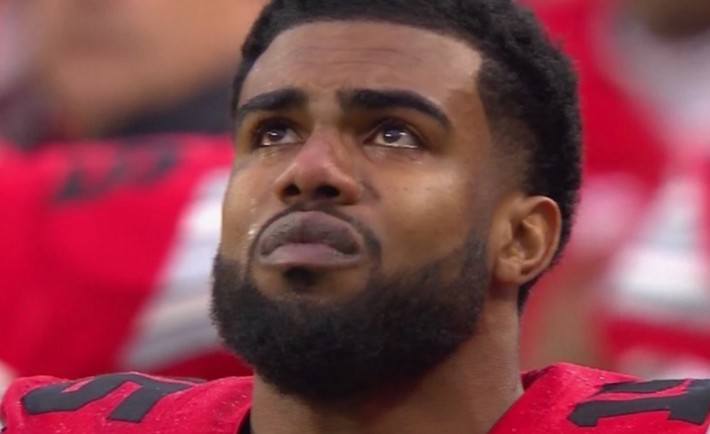 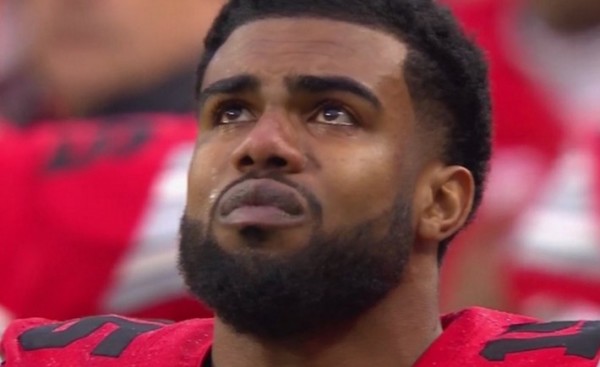 The grounds crew at Ohio State University will be doing some landscape repairs outside Urban Meyer’s office this week. The scorched earth left behind by Ezekiel Elliott will be in need of a serious overhaul.

Some engineers will also be needed to design a few new bridges to replace the ones that were lit on fire by Elliott in his postgame rant after his team lost to the Spartans of Michigan State.

If you didn’t see the Ohio State running back going off in the locker room, then take a look:

This was not a tirade like you might see from Dez Bryant. Elliott didn’t curse at the reporters and never really raised his voice at all. Dude was methodical and measured as he broke down the shortcomings of his play callers.

Make no mistake, though, dude was pissed, and he took about six and a half minutes to breakdown how the coaching staff cost his Buckeyes the game and most likely a shot at the college football playoffs. Elliott only carried the ball 11 times in the 17-14 loss, in which the Spartans never had the lead until it counted most, with zeroes on the game clock.

Ezekiel Elliott said he lobbied for the ball multiple times on the sidelines during the game. The tail back said he was 100% healthy so “he deserved more than 11 carries.”

Elliott was as clear as he could be about where the blame lied in the loss, telling Big Ten Network‘s Rick Pizzo, “The coaching staff didn’t put us in a position to win.” Boom!

When asked about any disappointment concerning his 15 game streak of 100-yard games ending with this 33-yard performance, Elliot said he didn’t care about that. He stated he was only concerned about winning the game. I can’t get inside the man’s head, but he seemed very sincere. I got the vibe that he wasn’t being selfish. He talked about how he spoke to teammates in the locker room after the game lamenting they all had very little time left together and needed to focus on next week’s game against hated Michigan.

Oh, Elliot emptied his flamethrower with one last soundbite, telling reporters there was no chance of him returning next year! See the clip below as the three older guys I assume are Ohio St. officials in the background watch in sheer horror. I’ve never seen a person more relieved than the bald guy with glasses on his head when Zek finally walked away from the mic!

Of course, you want to be a good teammate even after a big loss like this one. So Elliott got plenty of criticism on Twitter after he broke the OSU coaching staff off. I had to correct the Twit who had this to say:

I made it clear to the original Tweeter that Meyer doesn’t put in 70 hours for the running back or the rest of the team. He does it for the $5.8 million dollars OSU pays him yearly.

Meyer isn’t working for the Red Cross doing these kids a favor. He’s being compensated at the highest level. That makes it OK for a player to criticize him in my opinion. While others will be on Elliott all week about his comments, I’m fine with it. Glad he did it actually.

I’m fine with him doing it on the way out the door to the NFL also. Meyer would hang these players out to dry in a minute if he found it necessary. We’ve seen coaches bounce for bigger paydays or when NCAA sanctions are looming. Meyer did it himself, hanging Florida out to dry to “spend more time with his family.” It took the coach less time to find another coaching job than it did for one of his former players to become an alleged serial killer.

I doubt we’re going to see any punishment for Ezekiel Elliott as OSU heads into their biggest rivalry game next week with Michigan. If Meyer decided to bench Elliott, that would be to the player’s benefit. No need in the kid getting hurt with just a couple games left to play in his “student athlete” career. He should save those knees for the NFL where they believe in capitalism.

I’ve no idea why Elliott didn’t get the ball more during the game which was close throughout. I could understand if the game was getting out of hand and OSU had to throw it around more. Maybe the coaching staff didn’t feel like their starting tailback was 100% like he believed himself to be. Judging by the cyst on his leg that he showed reporters, he certainly didn’t look 100% to my untrained eye. That infection was serious enough to land him in the hospital earlier in the week.

Whatever the reason for the lack of touches for Ezekiel Elliott, he made sure the world knew how he felt about it. It gave me great joy to see it happen. None of those reporters that were climbing over each other to record the running back’s comments would have pressed Meyer on why he only gave his star back 11 carries. They would have asked the question politely and moved on when Meyer answered it to no one’s satisfaction except his own.

Here’s to Ezekiel Elliott having a great NFL career and I congratulate him on torching his coaching staff on the way out the door. Meyer and his staff make plenty of money so they should not be above criticism, even from the unpaid help who are expected to tow the company line without much in the way of company benefits.