Home Reviews Movie Reviews ‘Embrace of the Serpent’ will easily cast a spell on you: Movie... 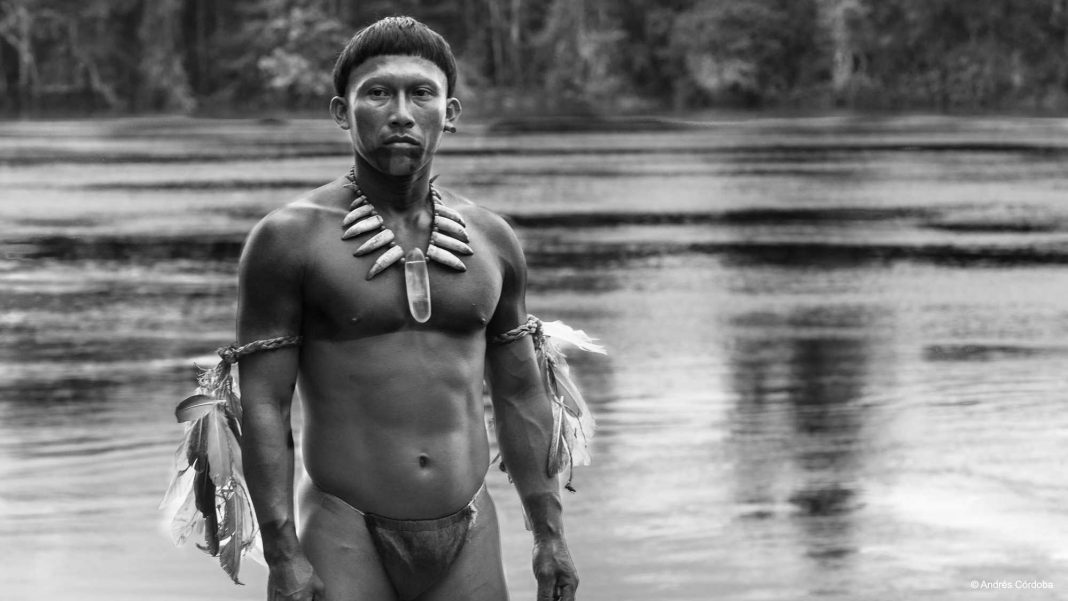 After just a few minutes of Embrace of the Serpent, Ciro Guerra introduces you to three of the four main characters, as well as introducing them to each other. The film is beautifully shot in black and white images of the Amazonian jungle akin to those found in the movie Tabu. A canoe carrying the ill Theo, portrayed by Jan Bivojet, is knocked ashore by the tribesman who travels with him. The tribal shaman Karamakate, played by Nilbio Torres, stands on the bank. The Shaman’s appearance, including painted face, loin cloth and armbands offer a rebuke to the other native; dressed in western clothes and begging for the life of a white man. Karamakate feels nothing but loathing towards white people however, as they wiped out his tribe. He feels contempt towards a native who would support white people too.

The is an explorer and anthropologist who makes Karamakate the only offer that could possibly get him to change his mind. He offers him hope that his tribe survived and that he, Theo, knows where they can be found. Karamakate is infuriated and takes out his frustration on his hut before reluctantly agreeing to help Theo in return for being lead to his people. This one moment stands out for humanizing Karamakate. He is an unforgettable character who is portrayed by two different actors through the two time periods shown in the movie. Even though the periods and the culture are foreign to the audience, they are also shown to be human in their motivations. After just a few minutes you are thrown in to the story and ready for more, no matter how sad it gets.

Embrace of The Serpent is the kind of movie the Director’s Fortnight of the Cannes film festival was made for. The director said before the film was shown that making the movie was a drawn-out process. The director really took the time to film the region properly and show you the differences between it and the world. Yet these issues and problems don’t reflect at all in the movie with a directional quality you wouldn’t think is coming from an inexperienced director. This is only Guerra’s third major production after all. It provides you with an incredible and deep insight in to the land and the people there. This is presented in one scene where a tribal chief tries to steal Theo’s compass, and he gets angry at him. He fears that the technology of the compass will take away their ability to navigate using the stars. Karamakate shows him how bad his condescension is by simply telling him that he can’t forbid the natives learning.

The backdrop of the both periods of the movie is the disappearance of natives that Karamakate mentions at the start. It also details the terrible crimes done by the white settlers for the sake of the rubber industry. The settlers invaded the land that the natives lived in, stole them away, and forced them to work in brutal slave labor conditions. This is shown by one particularly bad scene. 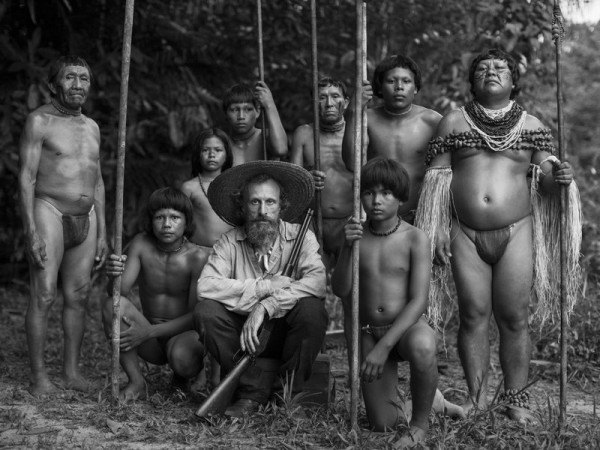 The story begins in the early 20th century before moving to the 1940s when Karamakate, played by the older Antonio Bolivar at this point, meets another white man who needs help. This time, it is Evan (Brionne Davis), a plant enthusiast who read Theo’s book and is looking for the Yakruna that Karamakate used to cure him. There is more to the edge of this movie than shifting between two time periods, however. There is also the incredible black and white photography provided by DP David Gallego to consider. It’s more than just great to look at. There is something dark hidden in the photography. A feeling enhanced by the excellent sound work done by Carlos Garcia.

The thing that really makes the movie stand out is the incredible storytelling by Guerra. The movie is inspired by two real-life explorers who are the basis for the two white characters. It fills the story with an authenticity missing from many modern movies. Though the movie is far from perfect.

The movie quickly becomes a horror movie when Evan and Karamakate discover that a cult, complete with a self-declared Messiah, has formed in the mission site. On its own this segment is great, but it does feel out of place when you compare it to the rest of the film. It also goes on too long. This is before someone begins hallucinating in color thanks to a Shaman’s spell that wears off right before the movie returns to back and white.

Though these problems are nothing when you consider how beautiful and stunning the movie is. There is an ancient soul and wisdom to the movie, with some heavy sadness thrown in. Even though the movie deals with heavy subjects such as colonialism, genocide, the hypocrisy of religion, and the damage done to some of the most beautiful natural areas, Guerra manages to put all of that in the background and make it a story not about that; but about four men and two canoes.

Embrace of The Serpent is truly a work of art and the kind of cinematic experience you would want to have in Cannes. Or, indeed, anywhere. It draws you in and leaves a lasting impression. It is a great journey in discovery that laments the loss of many plants and people. Though Karamakate is one of the most impactful aspects of the movie. The character accurately portrays the loneliness and guilt that survivors feel when they realize they are the last of their kind.

Film Review: ‘Embrace of the Serpent’