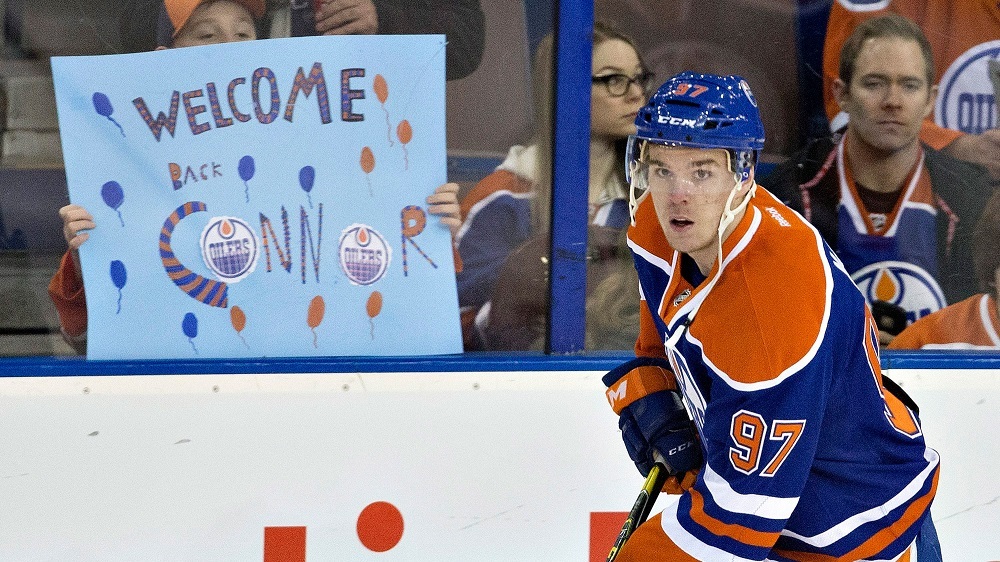 The Edmonton Oilers franchise is under some pressure this season. If Edmonton, who are playing in a new building, do not make the Stanley Cup playoffs then it would mark the 11th straight season of missing the NHL’s post-season. According to Derek Van Diest, an NHL.com correspondent who recently previewed the Oilers’ upcoming season, that would “set an NHL record for years out of the playoffs.”

However at least the future in Edmonton looks bright. In fact, you might argue that it has been a few decades now since it has looked so bright during the pre-season and that’s not only because of Connor McDavid.

The Oilers were active in the off-season, and they did well to dump dead weight in Taylor Hall, a ‘bold move’ that Craig MacTavish might never have made. With a new-look team, Edmonton may have the following front line on opening night:

Lucic has been a .613 point-per-game guy during his career. Furthermore, he is a player that GM Peter Chiarelli is familiar with from time that both individuals spent in Boston. At 28 years old, it’s quite possible that Lucic’s best hockey is still ahead of him.

Eberle, despite playing in Edmonton for his entire career to date, has never been a bad scorer either. He brings a career scoring average of .779 into the 2016/17 season, an average that he might beat this season. He is still just 26 years old and could be mid-ascension in terms of both his physical progression and skill-set progression. The same could be said about numerous other skaters on the Oilers.

I won’t go into details with all of them, but ‘Nuge’ is the bright light among the players just listed in my view. The first overall pick from the 2011 draft has 222 points in 313 NHL games to date (.709). He was effective at the World Cup of Hockey in September, tallying three points in the three games that Team North America played. He promises to be the most dangerous player on Edmonton’s second line.

Yakupov, the top pick from the 2012 draft, has had a disappointing start to his career. It could be that he ends up being a bust for a top pick. However, he could still be a player that adds depth to a team. He and Draisaitl are sleepers in Edmonton’s lineup, two players that could potentially finish in the top 40 for scoring this season.

Patrick Maroon, a late-season acquisition from Anaheim last year, had some intriguing production as an Oiler. In 56 games with the Ducks, he had just 13 points. However, the Oilers were able to get more than that out of Maroon in just 16 games. There’s a question with him of whether his 14 points in 16 games last season was just a blip of strong form or an approximation of a scoring average that he can hold up long term in Edmonton’s system.

However, Jesse Puljujarvi, who didn’t make Team Finland for the World Cup, is the biggest question mark in my mind. The 4th overall pick from this year’s draft is listed as a second liner with Van Diest’s preview of the Oilers’ season. He may prove to be over-rated at that.

The right winger played 50 games in Finland’s elite league last season, scoring 28 points. But Liiga, the Finnish Elite League, is considered the third-best hockey league worldwide. He barely put up half a point per game there and now not only is he jumping two levels to the NHL but he’s supposedly a second liner? That’s a tough one to swallow. This is a player that needs time, I doubt he’ll be a second liner, and I wouldn’t be surprised to see the Finnish player spend some time in the minors this upcoming season.

But, Puljujarvi aside, Edmonton still have so much youth that you have to expect a surprise blossom somewhere. Maybe Nuge averages a point per game, maybe Eberle does, or maybe Yakupov starts living up to his earlier hype. There are so many offensive “maybes” on this team that, on the whole picture, the Oilers are more like a “probably.”

On defense, I like the acquisition of Adam Larsson, and I certainly don’t have a problem with goaltender Cam Talbot’s 2.27 career goal-against average.

Bet365 have the Oilers as 5th favorites just to win the Pacific Division, and they are 20th favorites for the Stanley Cup. Arguably what that shows is that no one really thinks that Connor McDavid is MVP caliber. However, I think people will certainly see that by the end of November, and I think the players around him will benefit big time. Knock on wood and look for some big results in Edmonton from several players.

Edmonton finishes 1st or 2nd in the Pacific Division and makes the playoffs.