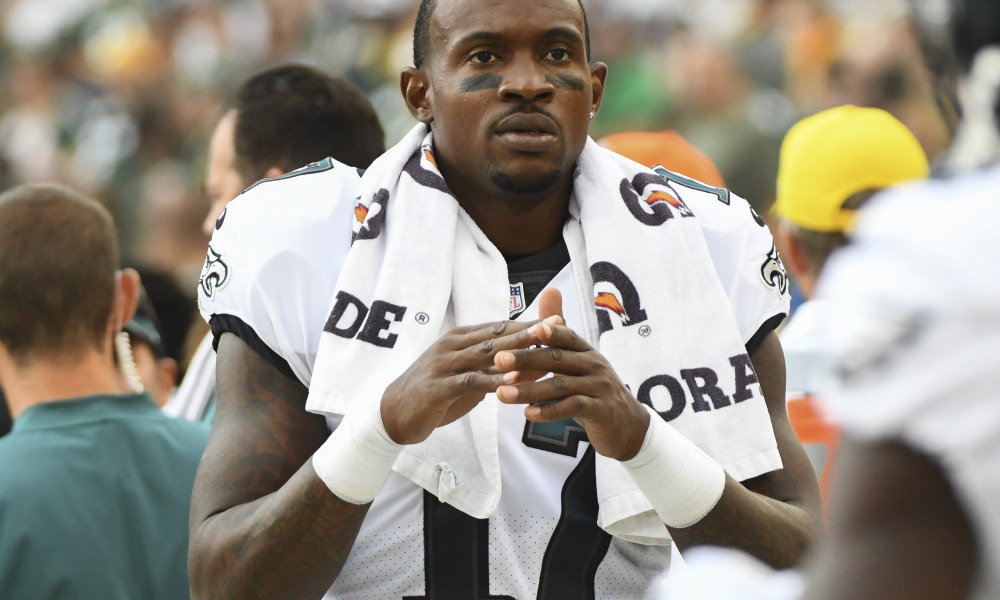 Last season, the Chicago Bears ended with a 3-13 record. They weren’t good. Quarterback Jay Cutler didn’t care about anything, the coaching was poor, and overall the franchise seemed to be falling apart with no clear path to salvation.

That’s why wide receiver Alshon Jeffery shocked the sports world in January when he made his 2017 Super Bowl prediction.

“I guarantee you we’ll win the Super Bowl next year,” said Jeffery.

Wait, what? Well, the Bears earned the No. 2 overall pick for their performance in 2016, and they used that pick to take quarterback Mitchell Trubisky, a pick that was widely criticized around the league.

So, it doesn’t look the Bears have done much to move towards revitalizing their franchise. And, currently, they’re sitting at the bottom of the NFC North with a 3-7 record. So, Super Bowl participation seems out of the question. But, hey, at least they’re just one win away from topping last season’s total, right?

Anyways, Jeffery was wrong. Or was he? After all, he’s sitting at 9-1 right now. The lucky man’s contract was up, leaving him free to sign a one-year, $14 million deal with the Philadelphia Eagles this offseason. And, according to Jeffery, his Super Bowl guarantee is transferable.

The Eagles are sitting on top the NFC right now, and they are clear favorites to win the NFC East division over the struggling Dallas Cowboys. If they can make their way past teams like the Minnesota Vikings, New Orleans Saints, and Los Angeles Rams, they will have the chance to represent the NFC in Super Bowl LII this season.

Of course, all that is a big ask, but the Eagles are the clear No. 1 team in the NFL right now. And while Jeffery didn’t have much to do with that over the first few weeks of the season, he has come alive as of late, becoming a favorite target of quarterback Carson Wentz with 18 targets over the past two weeks with 151 yards and three touchdowns to show for it.

Alshon has finally come alive as part of the Eagles’ offensive attack, and that just makes the team even scarier.

“I’ve seen the same guy,” said offensive coordinator Frank Reich. “That’s one of the things that I love about Alshon: Even early on when the ball wasn’t going to him as much, totally unselfish, hard worker. You just know these things take time—the chemistry, the opportunities, the confidence level that grows. He’s made some huge plays—huge plays in that Dallas game—and that’s why he’s here. I mean, those exact plays that we saw in that game, we want to keep seeing that.”

While Jeffery isn’t on pace to touch his numbers from the last two seasons with the Bears, he’s part of an offense that actually has the potential to do something this season. So, sure, he isn’t going to reach that 1,300 receiving yards (if everything continues as is now, he’ll end up somewhere around 900 yards with ten touchdowns), but he has the opportunity to make good on that promise to make the Super Bowl. So, you know, a little give and take.

And while Jeffery is surely excited to be producing on the field again and earning that $14 million paycheck the Eagles are signing for him, winning a Super Bowl is the most important thing to him. He left Chicago because he wanted a chance to play for something more than himself, and he finally has that this season in Philadelphia.

“Winning championships, that’s most important to me,” said Jeffery. “A lot of players make a lot of money, but some of them never make the playoffs, never get to experience a lot of things. Like being here in Philly, the atmosphere where we all want that for each other. We all want to go to the playoffs. We all want to win a championship. We’re all together. I think players who want a lot of individual stats, my opinion, their team don’t do well. It’s not basketball. In basketball, I can go out there and score 40 or 50, and we can win…Football, you need everybody.”

And while the deal is only good for one season, Alshon is hoping that the Eagles will bring him back next season.

“I love it here in Philly, man. I hope so. But right now, I’m just playing football, just staying locked in and focusing in on one day at a time, in the moment.”

And, of course, Jeffery would most prefer for the Eagles to bring him back with a little bit of extra jewelry on his mantle.