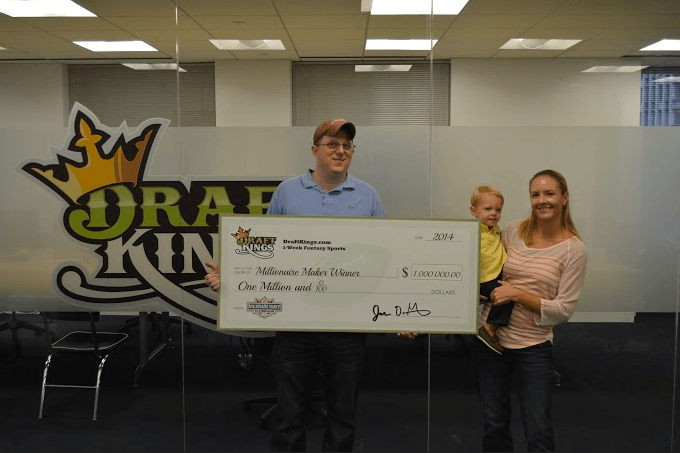 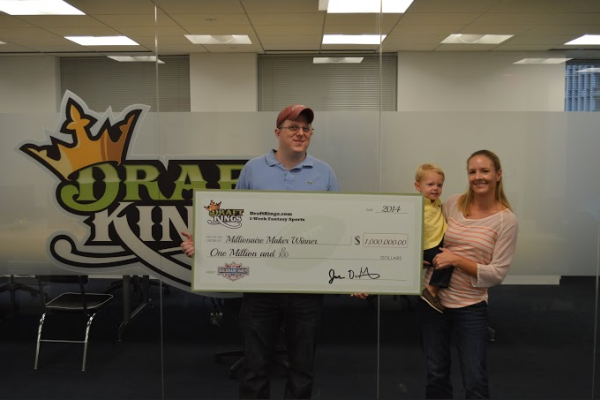 The final Millionaire Maker played out over the weekend as DraftKings fanatics tried to beat the odds in the divisional round of the NFL playoffs. It’s hard to say if limited games makes it harder or easier for less experienced players to win in either cash games or big prize tournaments.

On one hand you would think a mediocre player would have a better chance of staying close to the high-level DFS guys. There are fewer players to roster so your chances of making a dumb draft choice goes down. At the same time fantasy scores across the board get even closer with limited players from which to choose. Lots of overlapping lineups.

So just because your score is closer to a shark probably won’t translate to a higher finish.

I broke even this week as I only played a couple tournaments. Nothing to brag about and I did about as well with four games as I have done with 14 – 16 games to choose from.

The winner of the Milli Maker this week was JDUB1010. He can have a big celebration this weekend as can the government who will get about 31 percent of that money in taxes and they didn’t have to lift a finger or know anything about daily fantasy sports. Great deal for both parties, especially Big Brother who inexplicably wants to shut down this equally beneficial system.

212 was about 66 points above my highest total of the week. I could have been higher with a running back that actually scored some fantasy points. Anything would have been better than the zero output I got from Christine Michael. In my own defense I was just trying to be way off the mainstream picks in case something weird happened with Lynch. I wasn’t going to win big in my tourney unless I got a little reckless. 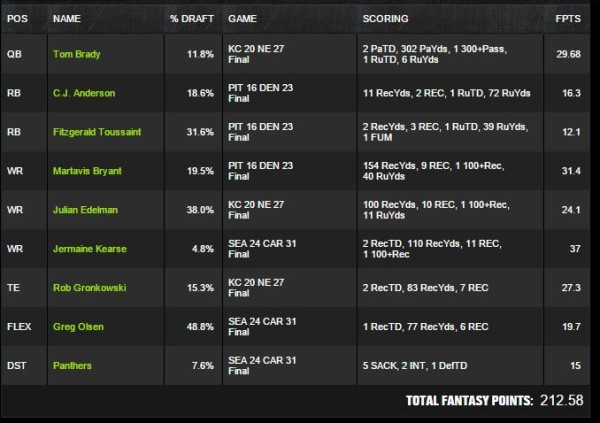 The winner of the million dollar prize got a nice return from Carolina’s defense even though they gave up big points in the second half. The first half dominance was good enough on DK and in the actual game.

The shrewdest move was finding cap room for both Gronk and Greg Olsen. JDUB1010 made room for them by having two super cheap backs that had enough fantasy points to help him. Mix in a dirt cheap Jermaine Kearse at $3200 and the groundwork was laid for the two best tight ends in football to be on the same fantasy team.

Obviously, Martavis Bryant’s 31 points were huge, and it was unbelievable the guy was owned by less than 20 percent of the players in the million dollar tourney.

With just four teams left in the playoffs, next week gets really tricky. The biggest prize for finishing first is 100K from what I checked on DraftKings today. It’s not a million but would be a great way to start off the new year.

There was a bit of legal news this week when Texas Attorney General Ken Paxton followed suite with New York and deemed daily fantasy sports to be illegal gambling sites.

“Paid daily ‘fantasy sports’ operators claim they can legally operate as an unregulated house, but none of their arguments square with existing Texas law,” Paxton said in a statement. “Simply put, it is prohibited gambling in Texas if you bet on the performance of a participant in a sporting event and the house takes a cut.”

Fighting each state individually is going to get even more costly for DraftKings and FanDuel as each month a different defender of the status quo comes out against DFS.

I just hope DK and FD are using the right weapons in this legal fight. They will need plenty of lobby money as well as a legal defense fund as they do battle with the states.

DraftKings had their standard response-locked and loaded for Texas.

“The Texas Legislature has expressly authorized games of skill, and daily fantasy sports are a game of skill,” said Randy Mastro, legal counsel to DraftKings. “The Attorney General’s prediction is predicated on a fundamental misunderstanding of [daily fantasy sports]. We intend to continue to operate openly and transparently in Texas, so that the millions of Texans who are fantasy sports fans can continue to enjoy the contests they love.”

DK is putting a lot of stock in that answer to legal challenges. The pathetic thing about all this legal controversy over DFS is the wording has to be so carefully crafted. Whatever the big DFS companies say now will be used against them in the coming trials.

The less they say, the better.

It would be nice if the debate would switch to allowing adults to gamble in whatever way they choose versus having the nanny state determine what we Americans do with every single dollar the masters allow us to keep after taxes.

That debate is a long way off apparently as we will likely see years of legal haggling over what a bet is and is not.

It would be nice if we could skip to that point and just make gambling legal in every state. It won’t happen with the current slow moving government that cannot keep up with the technology of 2016.

Get settled in for a long, drawn out, boring fight for the life of daily fantasy sports.