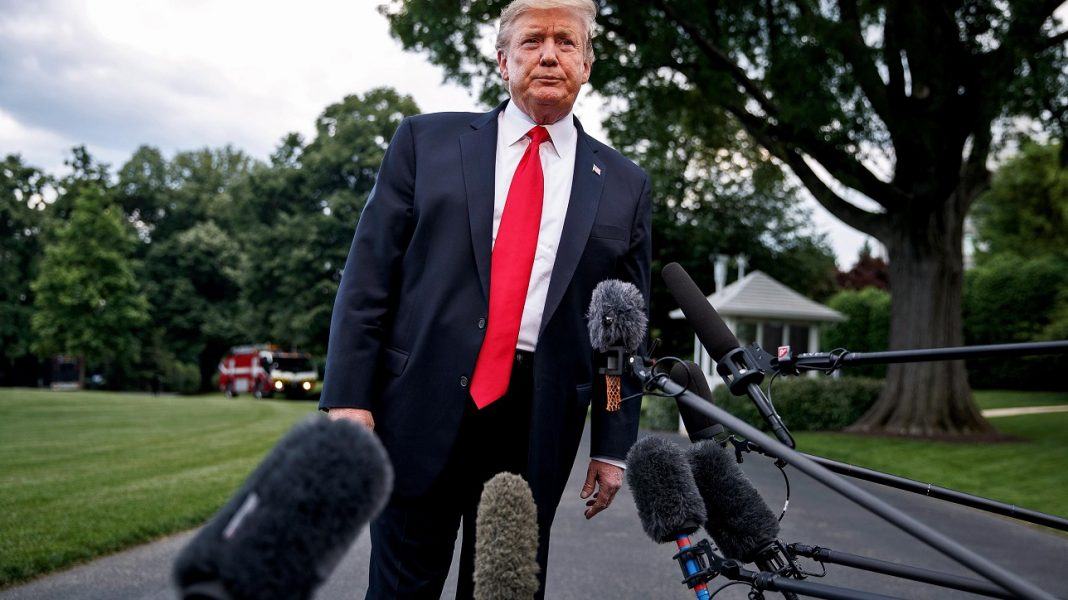 Media pundits are trying to figure out what caused Donald Trump to rush to the Rose Garden on Wednesday to claim he’s being victimized by House Speaker Nancy Pelosi. Tuesday, one federal judge denied his legal teams push to block a subpoena to have Congress get his taxes could be one reason.

Now, another federal judge has done the same while New York is passing a bill to allow Congress to see his state taxes. This has been something the president has fought long and hard for so expect more erratic behavior as things progress.

Easing some of the escalating tension between Congress and the White House, the House intelligence committee postponed efforts to enforce a subpoena against the Justice Department on Wednesday after officials agreed to hand over a cache of documents related to special counsel Robert Mueller’s Trump-Russia report.

The agreement came a day after the department said it would be willing to provide documents from Mueller’s investigation but only if the committee didn’t take action against Attorney General William Barr. The panel had been expected to vote at Wednesday’s meeting — now postponed — on an unspecified “enforcement action” against Barr or the department after they refused to hand over an unredacted version of Mueller’s report and other documents related to the Russia probe.

Democrats have accused President Donald Trump and Barr of trying to stonewall and block their constitutional oversight duties. A separate House panel voted earlier this month to hold Barr in contempt after he failed to comply with a similar subpoena.

The Justice Department will begin turning over 12 categories of “counterintelligence and foreign intelligence materials as part of an initial rolling production,” and that process should be completed by the end of next week, Rep. Adam Schiff, the intelligence committee’s chairman, said in a statement.

Schiff, a California Democrat, warned that the subpoena would remain in effect and “will be enforced should the Department fail to comply with the full document request.”

Assistant Attorney General Stephen Boyd told Schiff in a letter Tuesday that the Justice Department would be willing to make less-redacted portions of the report available to members of the committee and that officials were reviewing troves of investigative documents that were also requested by the committee.

“We appreciate the continued dialogue with the Committee and look forward to working toward appropriately accommodating their requests,” department spokeswoman Kerri Kupec said Wednesday.

The California Democrat said he hesitates to “call Bill Barr the Attorney General.”

“I think Bill Barr has all the duplicity of Rudy Giuliani without all the good looks and general likability of Rudy Guliani,” Schiff said during the Center for American Progress 2019 Ideas Conference Wednesday. “The most dangerous thing, I think, that Bill Barr has done is basically say that a president under investigation can make the investigation go away if he thinks its unfair which, by the way, means the other 14 investigations firmed up through other offices he can also make go away.”

U.S. District Judge Edgardo Ramos said in a ruling delivered from the bench that Trump and his company were unlikely to succeed in a lawsuit arguing that the subpoenas seeking records from Deutsche Bank and Capital One were unlawful and unconstitutional.

Ramos also concluded that the subpoenas have “a legitimate legislative purpose.”

The lawyers for the House Financial Services and Intelligence committees say they need access to documents from the banks to investigate possible “foreign influence in the U.S. political process.”

The hearing falls two days after a federal judge in Washington ruled against Trump in a similar case, finding that the president cannot block a House subpoena for information from a financial services firm that had done accounting work for him and the Trump Organization.

And it comes a day after Trump blocked his former White House lawyer, Don McGahn, from testifying before the House Judiciary Committee.

In a written submission prior to Wednesday’s hearing, lawyers for two congressional committees wrote that Trump’s effort to block the subpoenas was “flatly inconsistent with nearly a century of Supreme Court precedent.”

The lawyers said the House’s Committee on Financial Services and Permanent Select Committee on Intelligence sought the information as it investigates “serious and urgent questions concerning the safety of banking practices, money laundering in the financial sector, foreign influence in the U.S. political process, and the threat of foreign financial leverage, including over the president, his family and his business.”

Lawyers for Trump responded in writing that accepting the view of the committees would mean “Congress can issue a subpoena on any matter, at any time, for any reason, to any person, and there is basically nothing a federal court can do about it.”

Trump’s lawyers had asked the judge to temporarily block Congress from obtaining the records.

The banks took no position in the dispute.

The ruling is the second blow in New York on Wednesday to the privacy of Trump’s financial details. State lawmakers earlier passed a measure that would allow the president’s tax returns to be released to congressional committees.

New York lawmakers gave final passage to legislation Wednesday that would allow President Donald Trump’s state tax returns to be released to congressional committees that have, so far, been barred from getting the president’s federal filings.

The Democrat-led Senate and Assembly both approved the measures Wednesday, sending them to Gov. Andrew Cuomo, a Democrat. A spokesman has said the governor supports the principle behind the legislation but will review the bill carefully before deciding whether to sign it.

The legislation doesn’t target Trump by name, but it would allow the leaders of the U.S. House Ways and Means Committee, the Senate Finance Committee or the Joint Committee on Taxation to get access to any New York state tax returns filed by elected officials and top appointed officials. The legislation would apply to personal income tax returns, as well as business taxes paid in New York.

An earlier version of the proposal passed the state Senate two weeks ago that would have allowed congressional committees to get any New Yorker’s returns, regardless of whether they held public office. Lawmakers later narrowed the legislation to address concerns that it went too far, prompting the Senate to hold a second vote on the new language Wednesday.

New York Republicans have railed against the bill. John Flanagan, who leads the Senate GOP, called the legislation “troubling” and “bad public policy.”

“This bill is nothing more than political showmanship, and we all know it,” said Assembly Andrew Goodell, who represents a mostly rural western New York district.

Republicans also blasted Democrats for going after the president instead of focusing on challenges closer to home.

“The fact that we’re talking about taxes in this house is ironic because we’re not talking about the taxes that New Yorkers pay, which are the highest in the nation,” said Rob Ortt, a senator from the Buffalo area.

But the proposals’ Democratic sponsors — Sen. Hoylman, of Manhattan, and Assemblyman David Buchwald, of Westchester County — said the legislation promotes government transparency at a time when Americans need to know whether their elected leaders are putting the public’s interest first.

“We are affirming Congress’ role as a co-equal branch of government and the sacred constitutional principle that nobody is above the law, not even the highest elected official in the land,” Hoylman said.

The proposed changes to state law were made amid a battle going on in Washington over Trump’s federal returns.

Treasury Secretary Steven Mnuchin has said he wouldn’t comply with a congressional subpoena seeking six years of Trump’s tax returns, in part because the request “lacks a legitimate legislative purpose.” U.S. Rep. Richard Neal, D-Mass., chairman of the House Ways and Means Committee, has threatened to go to court to get the administration to comply.

Democrats are seeking six years of Trump’s personal and business tax returns to aid a committee investigation into whether the IRS is doing its job properly to audit a sitting president and whether the law governing such audits needs to be strengthened.

With New York being Trump’s home state and headquarters of many of his business enterprises, the legislation could give Democrats access to the president’s state tax returns at a time when the White House and Democrats who control the House continue to wrangle over the president’s federal tax returns.

Much of the information on Trump’s state returns would mirror the information included on a federal return, giving the Democrats a potential end run around the IRS if they wished to take it.

If Congress does request and obtain Trump’s state tax returns, that doesn’t mean the public gets to see them. Under federal law, the confidential information in the returns is supposed to be for the committee’s eyes only.

The New York bills have no time limitation on the tax filings that could be shared with Congress. They require that the returns be requested “for a specified and legitimate legislative purpose,” wording that could ostensibly give state officials the ability to refuse some requests they felt were primarily political in nature.

The New York bills would become law immediately upon being signed by Cuomo, though it could be delayed by a court challenge.