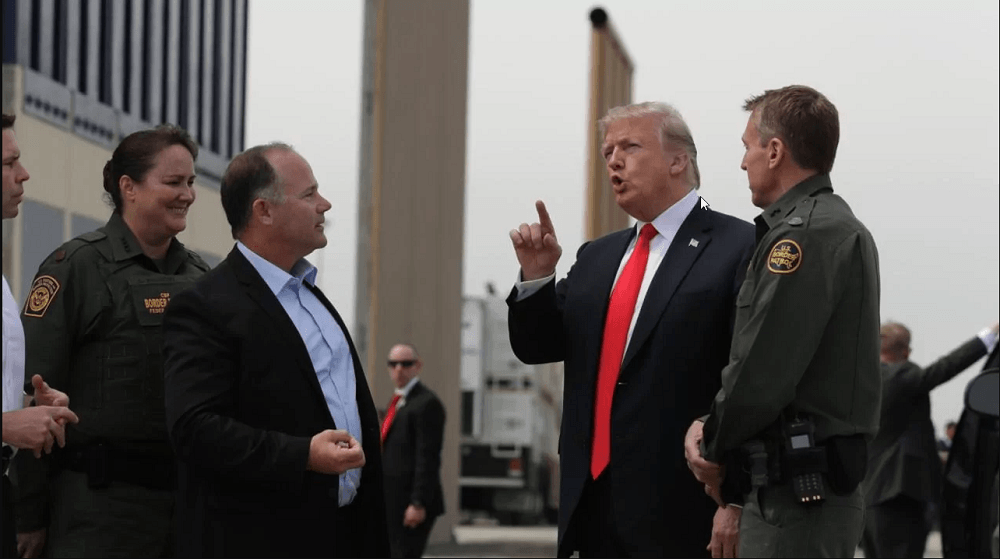 Donald Trump continues living up to his legend of telling at least five untruths every day, and he’s been on quite the roll on both Twitter and talking to the media. With more people exiting the White House, the president has been feeling more emboldened in his job which includes creating facts to suit his purpose whether they are about his latest job approval numbers, the China trade deficit or that Mexican wall.

President Donald Trump is pointing to a 50 percent job approval rating that may not fully comport with reality.

TRUMP: “Thank you to Rasmussen for the honest polling. Just hit 50 percent, which is higher than Cheatin’ Obama at the same time in his Administration.” — tweet Tuesday.

THE FACTS: Trump cites an approval rating that doesn’t jibe with other polls.

The daily tracking poll from Rasmussen Reports released Monday finds half of likely voters said they approve of Trump’s performance in office. That’s 4 points higher than what President Barack Obama scored on the same poll on April 2, 2010.

But Rasmussen stands alone among frequent pollsters in finding such a high rating for Trump, and its findings are often seen as less reliable because of the automated calling method it uses. It’s against federal law to have computers dial cellphones, so a big chunk of U.S. adults who don’t have landline phones — many of them young people — cannot be reached using the survey’s phone interviews.

Rasmussen says that to reach adults who do not have landline phones, about 20 percent of its interviews are conducted using an online panel. More than half of American adults do not have a landline phone, according to the most recent estimate from the Centers for Disease Control and Prevention. Rasmussen did not provide more information about how the panel it uses is recruited.

In contrast, a Gallup poll finds that based on a weekly average, Trump had an approval rating of 39 percent as of Sunday. That figure is lower than Obama’s rating of 49 percent during the comparable time period, according to Gallup.

Gallup does not use automated phone calls to tally its results. 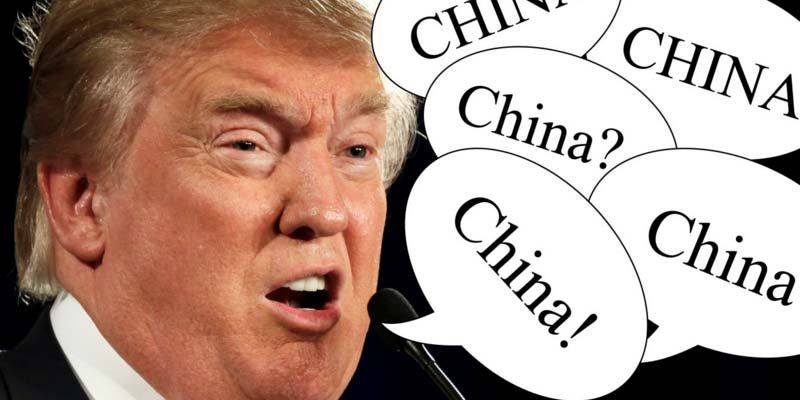 We are not in a trade war with China, that war was lost many years ago by the foolish, or incompetent, people who represented the U.S. Now we have a Trade Deficit of $500 Billion a year, with Intellectual Property Theft of another $300 Billion. We cannot let this continue!

— “We are not in a trade war with China, that war was lost many years ago by the foolish, or incompetent, people who represented the U.S. Now we have a Trade Deficit of $500 Billion a year, with Intellectual Property Theft of another $300 Billion. We cannot let this continue!”

THE FACTS: He overstates the trade deficit by $163 billion.

He does this by counting Americans’ purchases of goods from China as a loss for the U.S. while ignoring what China buys from the U.S. He also ignores another big part of the equation — trade in services.

Factor in trade in services and the actual U.S trade deficit with China was $337 billion.

As for intellectual property theft, it’s not clear where Trump gets his figure of $300 billion, though it may be a plausible estimate.

Illicit activities such as counterfeit goods, pirated software, theft of trade secrets and copyright and trademark infringement cannot be precisely measured. An independent bipartisan U.S. commission estimated that U.S. interests lost $300 billion from global intellectual property theft in 2013, with China the main culprit. The commission, in a 2017 update, gave a wide-ranging estimate, $225 billion to $600 billion, with thefts led by “thousands of Chinese actors.”

The Trump administration this week announced planned tariffs on $50 billion in Chinese imports; Beijing responded with plans to penalize imports from the U.S. by the same amount. This followed an opening salvo of U.S. penalties on steel and aluminum imports from overseas, including China, and Beijing’s retaliatory taxes on $3 billion of U.S. products.

The escalating dispute between the world’s two largest economies has roiled global markets. The S&P 500 has fallen more than 4 percent since March 1. 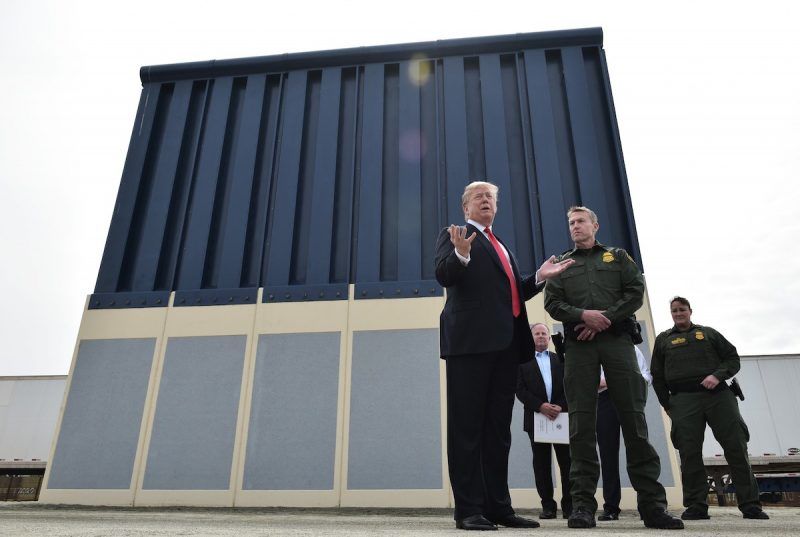 In vowing Tuesday to use the military on the U.S.-Mexico border until his coveted wall is built, President Donald Trump heaped blame on his predecessor, congressional Democrats, and Mexico for creating a dangerous and dysfunctional border.

Here’s a look at some of Trump’s latest claims on the state of the border, including a caravan of Central Americans crossing Mexico, and how they stack up with the facts:

TRUMP: “President Obama made changes that basically created no border. It’s called catch and release. And we can’t do anything about it because the laws that were created by Democrats are so pathetic and so weak.”

THE FACTS: Wrong on several fronts.

In decrying what it calls “catch-and-release” policies, the White House cites a 2008 law that gave new protections to children who cross the border alone from countries other than Mexico or Canada. But the William Wilberforce Trafficking Victims Protection Reauthorization Act passed both houses of Congress unanimously with Republican President George W. Bush’s enthusiastic support.

The administration also points to a settlement of a class-action lawsuit in 1997 that established standards for detention, treatment, and release of children who cross the border alone. Those protections have been extended by federal judges several times.

Over objections from the Obama administration, U.S. District Judge Dolly Gee in Los Angeles ruled that the settlement applies to children who come with their parents, as well as those who come alone.

Obama’s budget proposals for U.S. Customs and Border Protection grew 22 percent during his eight years in office to nearly $14 billion in his last year. The Border Patrol effectively ended its practice of turning Mexicans around without serious consequences, turning more often to formal removal orders in fast-track deportation proceedings or criminal charges.

Overall, Border Patrol arrests dropped during Obama’s tenure, despite surges in his second term. U.S. authorities were overwhelmed by unaccompanied children arriving at the border in 2014, predominantly fleeing violence and economic conditions in Central America, according to a U.S. Government Accountability Office report.

TRUMP: “I said (to Mexican officials), ‘I hope you’re going to tell that caravan not to get up to the border.’ And I think they’re doing that, because, as of 12 minutes ago, it was all being broken up. We’ll see what happens.”

THE FACTS: Nothing is being broken up in Mexico. The caravan of largely Central American migrants never intended to reach the U.S. border, according to organizer Irineo Mujica. The caravan was meant to end at a migrant’s right symposium in central Mexico later this week.

The caravan stopped to camp at a sports field in the southern Mexico state of Oaxaca over the weekend, not because it was forced to by Mexican officials, but because it was a convenient place with welcoming local authorities and there were no logistics to take the estimated 1,150 people any further. On Tuesday, they waited to see how they can get to the central state of Puebla, perhaps by buses. Life goes on normally at the camp, with people heating simple meals over fires and sleeping under the stars.

All that Mexican immigration officers were doing at the camp was taking people’s names, to sign them up for temporary transit visas, which would allow them to travel to the U.S. border, possibly to seek asylum in the U.S., or to seek asylum status in Mexico.

TRUMP: “We really haven’t done that before, or certainly not very much before,” referring to the deployment of U.S. military to the border.

THE FACTS: Sending troops to the border has been done for years, and at least one member of Trump’s own Cabinet has done it. In the summer of 2014, then-Texas Gov. Rick Perry, now serving as Trump’s energy secretary, ordered the deployment of 1,000 Texas National Guardsmen to the Rio Grande Valley, the busiest region for illegal border crossings. Perry gave the order in response to a sharp rise in the numbers of Central American children crossing the border alone.

In 2006, under Operation Jump Start, 6,000 troops were sent to the border in an effort to increase security and surveillance. The operation used the National Guard to assist the Border Patrol with non-law enforcement duties while additional border agents were hired and trained.

The number declined during the second year to about 3,000. Over the two years, about 29,000 National Guard forces participated in the missions, as forces rotated in and out.

Why Pass Microsoft Exam 70-764 and Why Maximize Exam Dumps for Your Learning?