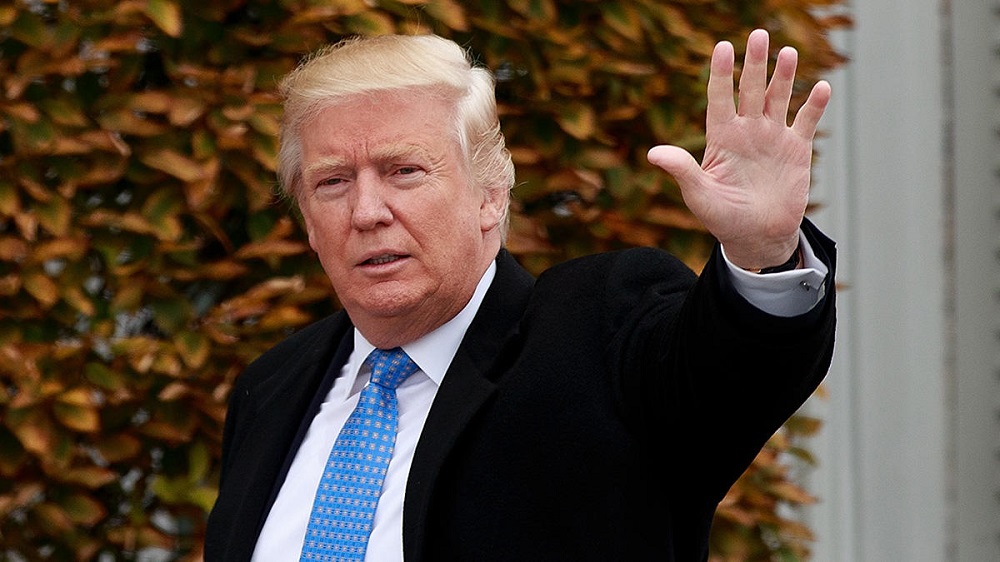 Donald Trump decided to give the press a show, and he had many scratching their head when he decided to have boxing promoter Don King standing by his site holding both an American flag along with Israel one. It actually felt more like a promo for his Celebrity Apprentice upcoming season rather than a man who’ll be inaugurated in just a few weeks.

After weeks of giving only brief comments to the media, Donald Trump made a series of public statements Wednesday, applauding the return of 8,000 jobs to the U.S. and hailing his discussions with President Barack Obama.

Anyone worried about the next 4 yrs, just look at Trump today w/ Don King in a wizard costume and a giant Trump button and tell me..oh Jesus

In one of his cameos on the front steps of his Mar-a-Lago resort in Palm Beach, Florida, Trump touted plans by a Japanese mogul to bring those jobs to the United States. They could be the first of the 50,000 jobs tech billionaire Masayoshi Son promised to create after meeting with the president-elect earlier in December.

In the grand scheme of the economy, the jobs announcement is unlikely to have a major impact. Still, it’s another example of how Trump is trying to stoke voters’ belief that he is actively fighting for their well-being.

Son is the founder and chief executive of SoftBank, one of Japan’s largest technology outfits. He owns the U.S. mobile carrier Sprint, which Trump said Wednesday would be moving 5,000 jobs “back” to the United States. Son also controls OneWeb, which Trump said would hire 3,000 workers.

It was unclear whether the president-elect was referencing the Dec. 6 commitment by Son to invest $50 billion in the United States and create 50,000 jobs.

Trump said the addition of 8,000 jobs was “because of what’s happening and the spirit and the hope.”

Still, the U.S. job market has been robust for much of 2016. Employers have added more than 2.2 million jobs over the past 12 months – a sign of economic health that pre-dates Trump’s presidential victory.

Sprint has struggled since its 2013 acquisition by SoftBank. The carrier shed roughly 9,000 workers between 2012 and 2016, reducing its staff to 30,000, according to annual reports.

Sprint’s attempt to join with rival T-Mobile failed in 2014 after regulators objected to combining two of the four largest mobile telecom companies in the United States. Analysts say a Trump administration would be more likely to approve telecom mergers, including a deal between Sprint and T-Mobile.

Sprint Chief Executive Marcelo Claure said in a statement that the company is “excited” to work with Trump.

“We believe it is critical for business and government to partner together to create more job opportunities in the U.S. and ensure prosperity for all Americans,” Claure said.

The Sprint jobs announcement came after tensions rose and fell Wednesday between Trump and Obama. Trump has made it clear that it didn’t sit well with him when Obama recently boasted that he would have won the election if he’d been running. 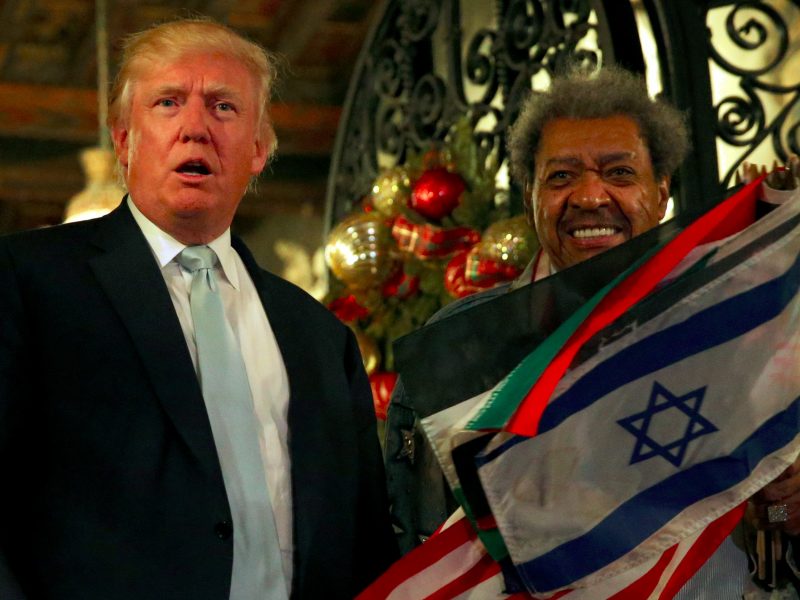 Trump appeared yet again Wednesday night on those steps, this time alongside legendary boxing entrepreneur Don King, who appeared to be one of several guests attending a dinner party. King carried about a dozen flags, including those of the U.S. and Israel; wore two big diamond necklaces, one of the Star of David and one of the American flag; and sported a large pin featuring a picture of Trump.

Trump addressed a range of questions, from tensions over Israeli settlements to accusations that Russia hacked the U.S. election.

He did not address calls from some on Capitol Hill for sanctions against Russia, saying, “We don’t have the kind of security we need.”

He added, “Nobody knows what’s going on,” and said he believes “we have to get on with our lives.”

With King by his side, Trump dismissed days of tense remarks by the outgoing and incoming presidents about who would win if they were to hypothetically run against each other, saying he and Obama had “a very, very good talk.”

Earlier, he had accused Obama of throwing up “inflammatory” roadblocks during the transition of power and said his administration was treating Israel with “total disdain.”

“Doing my best to disregard the many inflammatory President O statements and roadblocks,” Trump tweeted Wednesday morning. “Thought it was going to be a smooth transition – NOT!”

White House spokesman Eric Schultz said Obama phoned Trump. “Today’s call, like the others since the election, was positive and focused on continuing a smooth and effective transition,” Schultz said. “The president and president-elect committed to staying in touch over the next several weeks.”

Doing my best to disregard the many inflammatory President O statements and roadblocks.Thought it was going to be a smooth transition – NOT!

“We cannot continue to let Israel be treated with such total disdain and disrespect,” he said in a two-part tweet. “They used to have a great friend in the U.S., but … not anymore. The beginning of the end was the horrible Iran deal, and now this (U.N.)! Stay strong Israel; January 20th is fast approaching!”

Trump later told reporters that Israel is being treated “very, very unfairly,” maintaining that countries that are “horrible places” never get reprimanded. He refused to directly answer a question about whether Israel should stop building settlements, saying he is “very, very strong on Israel.”

not anymore. The beginning of the end was the horrible Iran deal, and now this (U.N.)! Stay strong Israel, January 20th is fast approaching!

We cannot continue to let Israel be treated with such total disdain and disrespect. They used to have a great friend in the U.S., but…….

The president-elect’s comments about Israel came a few hours after John Kerry made his final speech about Mideast peace as secretary of state. Kerry criticized Israel for settlement-building and accused Prime Minister Benjamin Netanyahu of dragging Israel away from democracy.