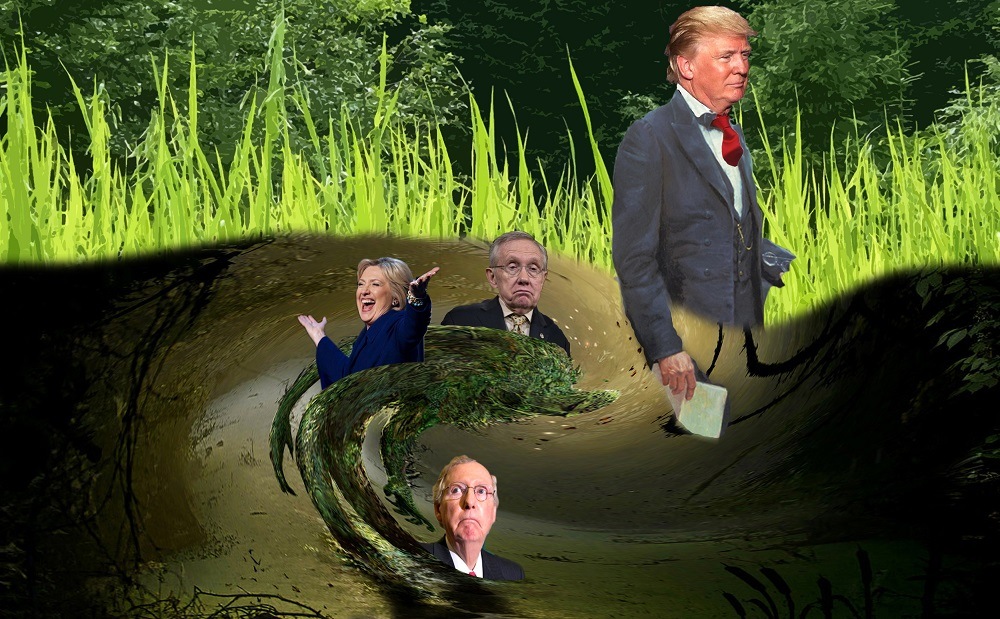 One of Donald Trump‘s big battle cries, while he was campaigning, was “drain the swamp,” but suddenly many names that are popping up to fill his cabinet are those that were part of that DC “swamp.”

The election just ended and the new president doesn’t even take office until Jan. 20. But the transition planning starts now.

Who’s going to be President-elect Donald Trump’s secretary of state? His chief of staff? His education secretary? Now that the news of Trump’s election has settled, speculation over how the president-elect will fill out his administration has consumed Washington.

Keeping in mind the truism that nobody who knows is talking, and those who are talking don’t really know, here are some of the names being floated, leaked and speculated about.

Let’s start with chief of staff, a key position that will influence the filling of many others. The name of Reince Priebus, currently chairman of the Republican National Committee, has often been mentioned. Priebus was a steady backer of Trump, when many in the party establishment wanted nothing to do with the brash businessman, and put the party’s apparatus behind Trump’s campaign.

New Jersey Gov. Chris Christie, who quickly gave his support to Trump after being vanquished by him in the primary campaign, has also been mentioned in connection with this job or another post in the incoming administration. Christie has been serving as head of the Trump transition team.

Jared Kushner, Trump’s son-in-law, was spotted taking a long walk on the White House grounds with Obama Chief of Staff Denis McDonough during Trump’s Oval Office visit with President Obama Thursday, leading some to speculate that he could be in line for the post.

Also add to the list of potential chiefs of staff Steve Bannon, who served as Trump’s campaign chief after coming over from the conservative website Breitbart News.

Another longtime Trump backer is former House Speaker Newt Gingrich. Could he be the next secretary of state? Rudy Giuliani, the former mayor of New York City who acted as Trump’s attack dog on the campaign trail, is said to be interested in becoming attorney general.

Another Trump aide, campaign manager Kellyanne Conway, tweeted that she has been offered an unspecified White House job.

And if Trump wants to go rogue, Sarah Palin is among those rumored to be interested in becoming secretary of the interior.

Beyond the names, here are four things to know about the transition, including how many jobs the new president needs to fill and whether the Obama administration will need to help.

Because this is a really big deal. Max Stier, president of the Partnership for Public Service, calls it “the most complicated takeover, not only on the planet, but in history.” Handing over the keys of the government means taking control of an operation with some 4 million employees, both civilian and military, and a $4 trillion budget. Huge numbers, even by the standards of Donald Trump. In fact, the Trump and Clinton campaigns actually began work preparing for the transition back in August.

There are some 4,000 political appointments for the incoming administration to fill. Every Cabinet agency needs a secretary and top staff. Each federal agency, an administrator. And of the 4,000 top jobs, one-quarter of them require Senate confirmation.

According to the Partnership for Public Service’s Center for Presidential Transition, “best practice generally dictates having White House positions filled by Thanksgiving, and the most important Cabinet positions ready to announce between Thanksgiving and Christmas,” to give time for the nominees to prepare for their confirmation hearings.

It seems President Obama, who called Trump “temperamentally unfit” for office during the campaign, and Trump, who questioned Obama’s American birth, have moved on, at least publicly. The White House has long said Obama wants to ensure that the transition to the Trump administration is smooth. And federal legislation passed in 2010 ensures a degree of cooperation, including providing government office space for the president-elect’s team as well as IT support. Trump transition team members will soon be visiting individual agencies for briefings with what’s been dubbed “landing teams.” The Government Services Administration, which oversees the logistics of the process, has a website here that explains the transition process.

No. In 1960, for instance, President-elect John F. Kennedy didn’t even meet with the man he succeeded, President Dwight Eisenhower, until nearly a month after his election. And until recently the transition process had been sort of an underground operation, to avoid the perception of a candidate “measuring the drapes” of the Oval Office before even being elected.