Donald Trump had no problem praising the polls when he was winning them, but now that they continue showing Hillary Clinton advancing into a double-digit win over him, he’s decided that they are just wrong.

After cutting himself off from the Republican party for the third or fourth time now, he’s once again mentioning them in his speeches. Trump obviously realized the trouble his campaign is in and is back to reaching back to the party for help. Hoping to keep voter momentum up, he’s not saying ‘rigged election’ as much as that could easily cause supporter apathy as his words could lead them to think their vote wouldn’t count anyway.

Now back stumping in states he’s desperate to win back, Trump is claiming that his campaign is winning after all. It doesn’t matter that he’s continued to push away the voters he needs to win, he is continuing to say that he’s doing well, even in states that it’s obvious he’s in serious trouble. 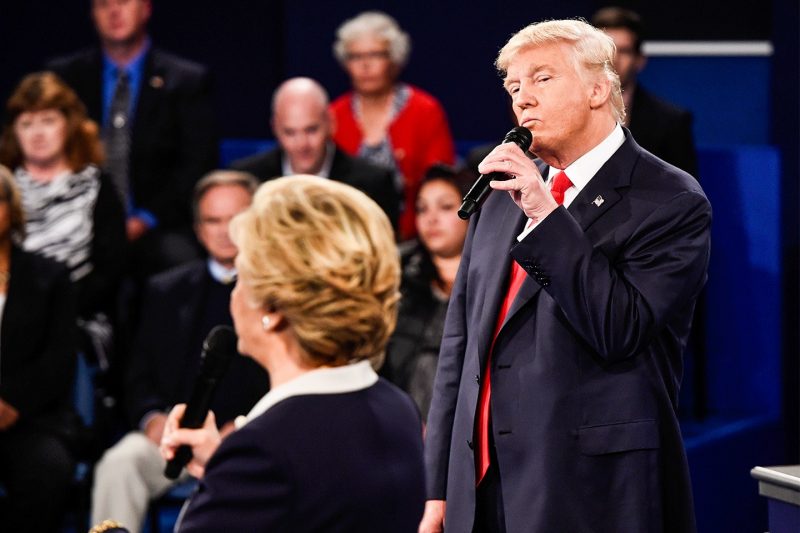 Election Day just 15 days off, Donald Trump fought to preserve his narrow path to the presidency in must-win Florida on Monday. Hillary Clinton worked to slam the door on her Republican opponent in New Hampshire.

Trump’s team concedes both publicly and privately that his electoral map is becoming bleak. And GOP leaders are growing increasingly worried that his weak standing jeopardizes vulnerable Republican Senate candidates in battlegrounds like Florida, New Hampshire and Pennsylvania.

In public, the New York billionaire is having none of that talk. He lashed out at the media Monday for promoting “phony polls” during a roundtable discussion with Florida farmers gathered next to a local pumpkin patch.

“We’re winning this race. I really believe we are winning,” Trump told the farmers, baskets of gourds, bales of hay and corn stalks behind him.

The day before, Trump told a Florida television station that the First Amendment to the Constitution might give the press too much freedom. He suggested that America adopt a system like England’s, which makes it easier to sue the media.

“England has a system where if they are wrong, things happen,” Trump told Miami’s CBS4.

Monday was the second day of Trump’s three-day swing in Florida, which is essential to his White House hopes. There is no scenario in which he can lose Florida and win the 270 electoral votes needed to become president, based on current polling. Even if he wins the toss-up state, his path to 270 requires victories in several more swing states, including North Carolina, Ohio, Iowa, and Nevada.

The Trump campaign acknowledged its challenge in a Monday fundraising email, conceding that victories even in those swing states wouldn’t be enough.

“Polls show us close in New Hampshire, Colorado, and Pennsylvania. Winning just any one of those states would lead us to victory,” the campaign wrote, citing three states where Trump is trailing Clinton by significant margins in recent polls.

Florida was the focus on Monday with the beginning of in-person early voting across 50 counties, including the state’s largest: Broward, Duval, Hillsborough, Miami-Dade, Orange and Palm Beach. The remaining counties will start in the coming week.

Early voting by mail has been underway for weeks. Nearly 1.2 million voters in Florida have already mailed in ballots. The state has nearly 13 million registered voters.

Trump’s schedule in the penultimate week of the campaign reflects the narrow path he faces in his White House bid.

After three days in Florida, he plans to make stops in North Carolina on Wednesday. He will spend all day Thursday in Ohio with other stops in the Midwest – Iowa and Wisconsin – the next day before a Western swing to Colorado and Nevada this weekend.

Trump’s difficulties are evident on that Western swing. Instead of focusing on just the pair of battlegrounds, his team is also mulling a stop in Arizona. A Democratic presidential candidate hasn’t won Arizona in 20 years, yet polls there show Trump in a close race.

Democrats continue to get help from President Barack Obama, whose high approval numbers have made him a political force in the sprint to Nov. 8. The president criticized Trump and praised Clinton as he campaigned Sunday in Nevada, a competitive state in the race for the White House and the Senate.

Obama told Nevadans they have a winning hand in Clinton and Senate candidate Catherine Cortez Masto, who is locked in a tight race to fill the seat being vacated by retiring Democratic Sen. Harry Reid. Democrats need to retain that seat and pick up four more elsewhere to claim the Senate majority if Clinton wins.

Obama was unsparing Sunday in criticizing Trump, describing him as unfit to be president. Obama also railed against Republicans and conservative media outlets for promoting “all kinds of crazy stuff” about him and other Democratic leaders. He cited as an example the questions until recently from Trump and others about whether he was born in the U.S.

“Is it any wonder that they ended up nominating somebody like Donald Trump?” Obama said.