Donald Trump is choosing to spend funds on a big expensive ad campaign against drugs, but there won’t be any of the money actually going to help fight it. He is choosing to talk about it thinking that can be the equivalent of Princess Diana’s famous ‘Hugs not Drugs” campaign.

It’s much too late for that sentiment in America as the opioid epidemic has ravaged communities all over the country while claiming thousands of lives.

Sadly for all of you out there with friends or family members suffering from opioid addiction, expect less funding for clinics and portions of the government that are now helping. The ACA aka Obamacare is what’s is helping to save their lives now, but Trump would rather spend the funds on an ad campaign which only tells you not to use drugs. It won’t be telling you where to get help as the funds that are actually helping those suffering will begin drying up as the president continues hacking away at the ACA.

In ringing and personal terms, President Donald Trump on Thursday pledged to “overcome addiction in America,” declaring the opioid crisis a nationwide public health emergency and announcing new steps to combat what he described as the worst drug crisis in U.S. history.

Trump’s declaration, which will be effective for 90 days and can be renewed, will allow the government to redirect resources, including toward expanded access to medical services in rural areas. But it won’t bring new dollars to fight a scourge that kills nearly 100 Americans a day.

“As Americans we cannot allow this to continue,” Trump said in a speech at the White House, where he bemoaned an epidemic he said had spared no segment of American society, affecting rural areas and cities, the rich and the poor and both the elderly and newborns.

Officials said they also would urge Congress, during end-of-the-year budget negotiations, to add new cash to a public health emergency fund that Congress hasn’t replenished for years. The Public Health Emergency Fund currently contains just $57,000, according to the Department of Health and Human Services, a negligible amount. Officials would not disclose how much they were seeking.

“How can you say it’s an emergency if we’re not going to put a new nickel in it?” said Dr. Joseph Parks, medical director of the nonprofit National Council for Behavioral Health, which advocates for addiction treatment providers. “As far as moving the money around,” he added, “that’s like robbing Peter to pay Paul.”

Trump’s audience Thursday included parents who have lost children to drug overdoses, people who have struggled with addiction, and first responders whose have used overdose reversal drugs to save lives.

Trump also spoke personally about his own family’s experience with addiction: His older brother, Fred Jr., died after struggling with alcoholism. It’s the reason the president does not drink.

Trump described his brother as a “great guy, best looking guy,” with a personality “much better than mine.”

Trump said he hoped a massive advertising campaign, which sounded reminiscent of the 1980s “Just Say No” campaign, might have a similar impact.

“If we can teach young people, and people generally, not to start, it’s really, really easy not to take ’em,” he said.

As a presidential candidate, Trump had pledged to make fighting addiction a priority.

“When I won the New Hampshire primary, I promised the people of New Hampshire that I would stop drugs from pouring into your communities. I am now doubling down on that promise and can guarantee you we will not only stop the drugs from pouring in, but we will help all of those people so seriously addicted get the assistance they need to unchain themselves,” Trump told a crowd in Maine weeks before last November’s election.

Once in office, Trump assembled a commission, led by Gov. Chris Christie of New Jersey, to study the problem. The commission’s interim report argued an emergency declaration would free additional money and resources, but some in Trump’s administration disagreed.

Christie, in a statement, said Trump was taking “bold action” that shows “an unprecedented commitment to fighting this epidemic and placing the weight of the presidency behind saving lives across the country.”

Officials said the administration had considered a bolder emergency declaration, under the Stafford Act, which is typically used for natural disasters like hurricanes. But they decided that measure was better suited to more short-term, location-specific crises than the opioid problem. Drug overdoses of all kinds kill an estimated 142 Americans every day.

As a result of Trump’s declaration, officials will be able to expand access to telemedicine services, include substance abuse treatment for people living in rural and remote areas. Officials will also be able to more easily deploy state and federal workers, secure Department of Labor grants for the unemployed, and shift funding for HIV and AIDs programs to provide more substance abuse treatment for people already eligible for those programs.

Trump said his administration would also be working to reduce regulatory barriers, such as one that bars Medicaid from paying for addiction treatment in residential rehab facilities larger than 16 beds. He also spoke of efforts to require federally employed opioid prescribers to undergo special training, talked about the Postal Service and Homeland Security Department’s ramped-up inspection of packages, the Justice Department’s targeting of opioid dealers and efforts to develop a non-addictive painkiller.

But Sen. Richard Blumenthal (D-CT), said the effort falls far short of what is needed and will divert staff and resources from other vital public health initiatives.

“Families in Connecticut suffering from the opioid epidemic deserve better than half measures and empty rhetoric offered seemingly as an afterthought,” he said in a statement. He argued, “An emergency of this magnitude must be met with sustained, robust funding and comprehensive treatment programs.”

Democrats also criticize Trump’s efforts to repeal and replace the “Obamacare” health law. Its Medicaid expansion has been crucial in confronting the opioid epidemic.

Adopted by 31 states, the Medicaid expansion provides coverage to low-income adults previously not eligible. Many are in their 20s and 30s, a demographic hit hard by the epidemic. Medicaid pays for detox and long-term treatment.

Rep. Seth Moulton, D-Mass., said in a statement that many people addicted to opioids don’t have insurance and more must be done to expand coverage.

“We cannot keep having conversations about gutting the ACA while simultaneously talking about the opioid epidemic. And we cannot declare a public health emergency without actually allocating resources to help combat it,” he said. 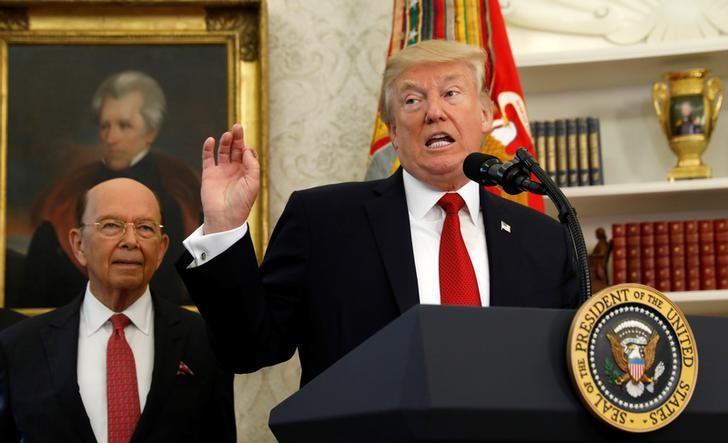 The nationwide health emergency that Trump ordered is more tailored and directed, but comes with less immediate action.

Senior White House officials told media outlets that they will follow up this order by working with Congress to fund the Public Health Emergency Fund and to increase federal funding in year-end budget deals currently being negotiated in Congress. But both of those avenues are far from guaranteed, especially given all the other issues on Congress’ plate.

By using the Stafford Act, Trump would have taken a dramatic step and immediately provided the federal government with money earmarked for natural disasters to combat the issue.

But both Trump and Obama administration officials say that designation would have been too broad and put an undue burden on the Federal Emergency Management Agency’s Disaster Relief Fund, a fund already cash-strapped by recovery efforts from the three major hurricanes that hit the United States this year.

Using FEMA funds to combat the opioid crisis would be “a little bit like asking an engineer to bake a cake,” said Rafael Lemaitre, the former communications director for the White House Drug Policy Office under President Barack Obama.

“I do think the Public Health Service Act is a more appropriate route to take than the Stafford Act designation,” he said. “I worked at FEMA for two years and dealt with multiple disasters. The Stafford Act is not structured to deal with a long-term, complicated public health crisis like the opioid crisis.”

“One of the things that I think is the most beneficial part of having a public health emergency is you really can marshal public support and then you can bring all the resources of the federal government to bear on it, bringing people from all of the agencies to combat the issue,” he said.

Though both Lemaitre and Coderre said this step was important, both agreed that it was not, in Lemaitre’s words, a “silver bullet solution to the opioid crisis.” That, they said, would be additional funding from Congress.

“A smarter play here would be for the administration to move beyond this declaration and pass the billions in funding needed to address this crisis. That is how you move the needle on this,” Lemaitre said.

The Actual Fight Against Opioids:

There are also concerns in the treatment community about how other actions by the Trump administration — namely efforts to repeal Obamacare and strip funding from Medicaid — would adversely impact the fight against opioids.

Coderre called efforts to repeal and replace Obamacare, the sweeping Obama-era health care law that mandates drug treatment services, the “elephant in the middle of the East Room today.”

Trump’s order on Thursday will rely heavily on the presidential commission he convened earlier this year, which in their interim report urge the President to use either the Public Health Services Act or the Stafford Act to declare a state of emergency.

“The first and most urgent recommendation of this commission is direct and completely within your control. Declare a national emergency under either the Public Health Service Act or the Stafford Act,” wrote the commission led by New Jersey’s Republican Gov. Chris Christie. “With approximately 142 Americans dying every day, America is enduring a death toll equal to September 11th every three weeks.”

Christie heralded Trump’s announcement by noting that the step was recommended by his commission.

But concerns remain about how Trump will follow through on the nationwide health emergency declaration.

“I hope the Trump administration follows through without delay to use this order to provide relief to the millions of families suffering from this crisis,” said Rep. Marcy Kaptur, an Ohio Democrat. “We cannot afford to wait months between an announcement and action.”