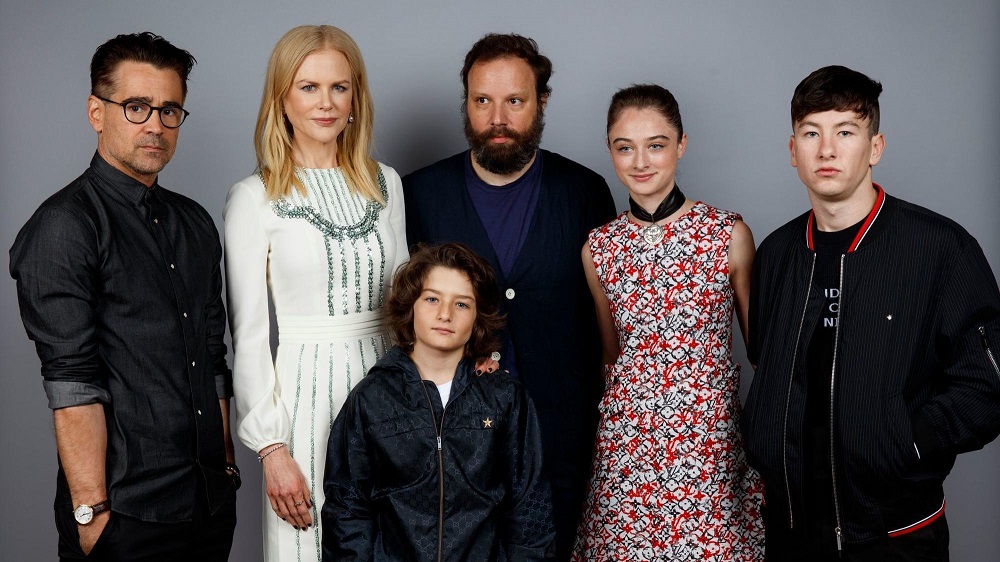 The name Yorgos Lanthimos may not ring any bells for many moviegoers, but that name brings A-list actors to work on his films as Colin Farrell did starring in “The Lobster.”

Critics are often undecided about his films and some, like Seattle Times Moira Macdonald had this to say about his latest: “The Killing of the Sacred Deer review: What the hell was that?”

“Yorgos Lanthimos’ “The Killing of a Sacred Deer” is the kind of movie that you watch with two simultaneous emotions: fascination and the desire to leave immediately.” 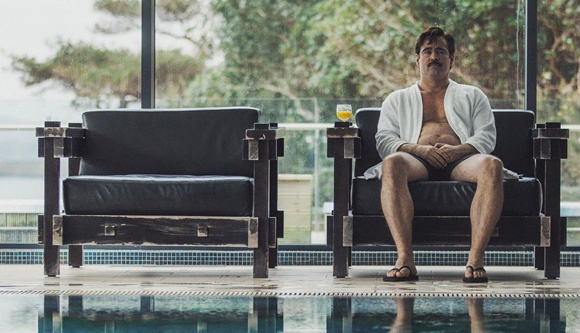 His films, which he writes with Efthymis Filippou, are deadpan, midnight-black comedies that carry out grim allegorical absurdities to extreme ends. Characters speak stiltedly in cliches while an intensifying menace envelopes them. Things get weird, and then they get brutal.

And yet Lanthimos is not only a regular on the festival circuit (his latest, “The Killing of a Sacred Deer” premiered at the Cannes Film Festival) but he has earned an Oscar nomination (for the script to “The Lobster”) and drawn eager stars like Nicole Kidman, Colin Farrell, Rachel Weisz and Emma Stone. “The Lobster,” a dystopian satire of 21st-century mating, was even a surprise box-office success, earning $9.1 million in 2016 — pretty good for a low-budget movie in which loners are hunted in the woods or turned into the animal of their choosing.

I absolutely loved “The Lobster,” and wanted to ask Farrell what interested him to do such a fantastical film. If you’ve not seen it, it is a must to appreciate the fine actor he is. Farrell had watched Lanthimos’ “Dogtooth” a few years prior and found it very disturbing and provocative. That was enough plus a different type of script.

“I was confused by the script and a little bit disturbed by it, but ultimately moved by the end of it,” the actor said. “Rachel’s character and my character were just so bizarre; I don’t imagine that I’ll ever do a film that’s more unusual than this. Possible, but I don’t imagine.”

“The Killing of a Sacred Deer,” which stars Kidman and Farrell and features the breakthrough performance of Irish actor Barry Keoghan, opened last weekend with similarly packed art-house theaters. Farrell and Kidman play the parents of a suburban family terrorized by a young man (Keoghan) who’s a vague figure of comeuppance come to force Farrell’s heart surgeon to kill one of his two children as retribution for an earlier sin.

Earlier this fall at the Toronto International Film Festival, we were able to round up Lanthimos, Kidman, Farrell (who also starred in “The Lobster”) and Keoghan to discuss their surreal and divisive film, and the peculiarities of acting in a Lanthimos film. 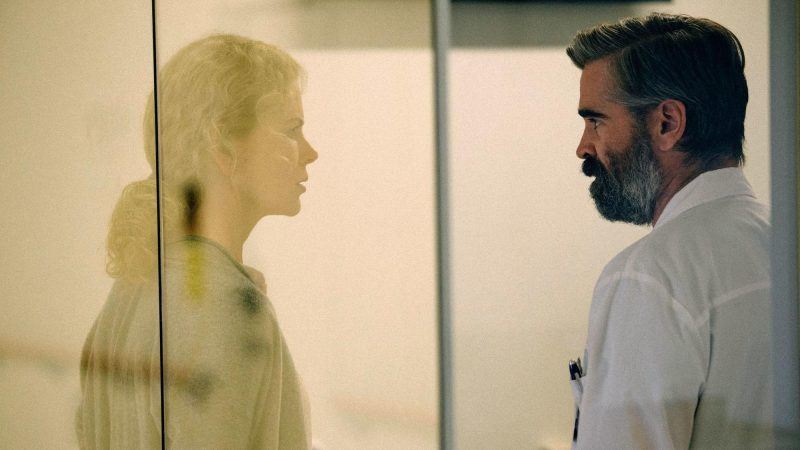 Some might assume from your films Yorgos that you don’t have very much patience for small talk.

Lathimos: I prefer the small talk to the big talk. I’m not a big talker, am I?

Kidman: He’s quiet. He’s an introvert, but not in his filmmaking.

Nicole, how did you get in contact with Yorgos?

Kidman: I pursued him relentlessly, and he finally gave in.

Yorgos: You like saying that. I turned her down for 50 films.

Kidman: We had met. We had food together and chatted. That was a nice meeting. Then we had sort of a texting relationship. I was doing a play in London. He told me about the script. I said, “That sounds interesting, Yorgos.”

Did you find it easy in describing the film the cast, Yorgos?

Lanthimos: Never get yourself into a situation where you have to describe the film.

Farrell: “It’s 104 pages of joy!” I loved it. It was remarkably different from “The Lobster,” in tone, but also existing in a grossly idiosyncratic world. It was a mystery to me, as “The Lobster” was. It’s very seldom for me that you get to read writing that is so remarkably unique. The only other time that I had a similar feeling was with Martin McDonagh (“In Bruges”).

Keoghan: It was a weird film, a weird script, but I loved it. It’s a different kind of acting, you know? You don’t act in it. It was just a challenge. I think he hates actors, as well.

Is it acting? It’s certainly a different kind of performance.

Kidman: He doesn’t like “acting,” am I right? He always says, “Stop acting.”

Lanthimos: What do you mean? There’s a lot of acting everywhere, all over the place. (Laughs)

Kidman: He says, “You’re doing too much. Stop it.”

Farrell: The best direction in 20 years of doing this job I’ve ever heard is him screaming from a monitor to an actor: “Stop trying to be so naturalistic!”

Lanthimos: Because that’s the worst! You see the effort of someone trying to be like real life. You go, “I’m embarrassed. Don’t do that.”

Kidman: I think I embarrassed him a lot.

Farrell: It takes habituated behavioral responses and pushes them to the side. It kind of presents subtext as reality and so you don’t have to play subtext at all. It feels to me to be a really honest world.

Yorgos, the title refers to Euripides’ “Iphigenia in Aulis.” How related to Greek tragedy do you consider the film?

Farrell: He had a genetic disposition to arrive there, and he couldn’t avoid it.

Lanthimos: These are matters that we’ve been concerned with since ancient years, but they’ve actually become more taboo. I get a sense that this film upsets people because of the themes and the story. It did puzzle me in the beginning how much people are scandalized by being shown certain situations. It’s even more impressive when you realize that similar stories used to be a more common thing.

Why do you think that is?

Lanthimos: I think we’ve become very conservative. We elevate as important certain things and then others we consider them taboo, and we don’t touch them. There’s a facade in general that we try to use to seal ourselves from certain things. I don’t have answers but just to poke a certain nerve.

Did the experience of making the film mimic the story’s trajectory from comedy to bleakness?

Farrell: If you scream into the wind for 12 hours without anyone around, you’re going to be a little bit insane for at least another 12. We almost shot in continuity so it got darker and it got bleaker and it got weightier the closer we got to a decision that’s made in the film. I was depressed by the end. It got under my skin for sure.

Kidman: And we were in confined spaces. We were shooting in a (Cincinnati) hospital which is a very strange environment, anyway, to be shooting in. I was walking with bare feet and they were like, “Put your shoes on! You’ll pick up some weird bacteria.” 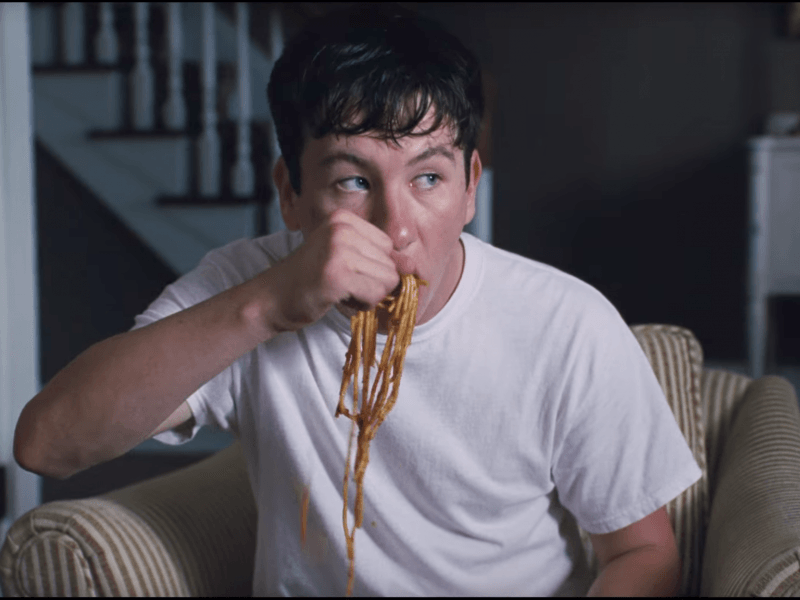 Barry, you’re especially creepy in this. Did you know you had that in you?

Keoghan: I kind of did. (Laughter) Especially that spaghetti scene. I was like: “Turn up the creep-mode.”