Home Sports Football Dolphins Adam Gase swears John Elway had nothing to do with onside... 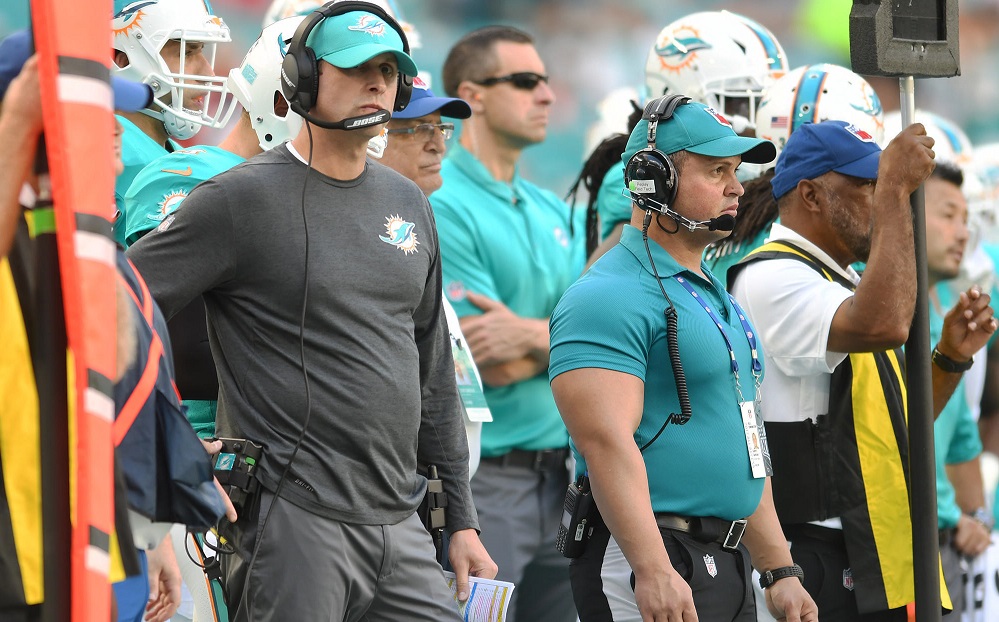 With ten minutes remaining in the fourth quarter and the Miami Dolphins leading the Denver Broncos 33-9, Dolphins head coach Adam Gase decided to really stick it to his former team by calling (and successfully executing) an onside kick. It didn’t turn into much, but the Dolphins still went on to beat the now 3-9 Broncos 35-9, and Gase got to add a little insult to injury with the onside conversion.

It was pretty clear to everyone that the former Broncos offensive coordinator had ulterior motives when calling such a play.

“He’s mad at somebody in this organization,” said Broncos cornerback Chris Harris Jr. “It looked like he was trying to embarrass us. But I guess that’s what happens, they haven’t won too many games, a big game for them. Guess he wanted to make it personal, and guess he still had some bad blood left over from before.”

To find that bad blood, you’ll have to look back to early 2015 when Adam Gase had the San Francisco 49ers head coaching position locked up. After two interviews, everyone (Gase included) thought it was his. But then he didn’t get it, and it turns out part of the reason is because Broncos general manager John Elway didn’t have much good to say about Gase to the 49ers.

At the time, Gase thought nothing of it. The Broncos had a head coaching position that they were looking to fill as well, and Gase assumed that Elway wanted to discourage the Niners so that the Broncos could keep Gase in town. And Gase was interviewed for the job.

But then the job went to Gary Kubiak.

So, now, Elway ruined Gase’s chances of taking over the reins in San Francisco, just to hire someone else in Denver. Yeah, he probably wasn’t thrilled about that. And it showed Sunday.

Of course, Gase wouldn’t admit to any of this after the game, but it doesn’t take Sherlock Holmes to figure out that most head coaches don’t call an onside kick up by 24.

Elway has yet to comment on the situation, but given how badly the Broncos lost, I’m not sure how much there is to say. But, many of the Broncos players had something to say. While the defensive players in general weren’t happy, the offensive players just brushed it off as typical Adam Gase.

“Gase is a savage,” said wide receiver Emmanuel Sanders. “He loves to win; he loves to embarrass you. That doesn’t surprise you…He’s not wrong. If that’s what he wants to do, to run up the score and give his team confidence…He can do that as a head coach.”

Thomas similarly came to understand that that’s just how Gase is, so it’s best to stay on his good side.

“That’s Gase,” said wide receiver Demaryius Thomas. “He was my receivers coach…and that’s Gase. The way I guess he left the Denver Broncos, he wasn’t satisfied, so he went onside. He kicked the onside, and he got it, and he was happy about it. He got them a win, and we still trying to find one.”

While the onside kick is all good and fun, it doesn’t do much for the 5-7 Miami Dolphins. The revenge factor is cool, but the Dolphins and Broncos are both very much out of the AFC Playoff picture with no real chance of finding their way back into it. But, at the same time, things can’t get much worse for John Elway.