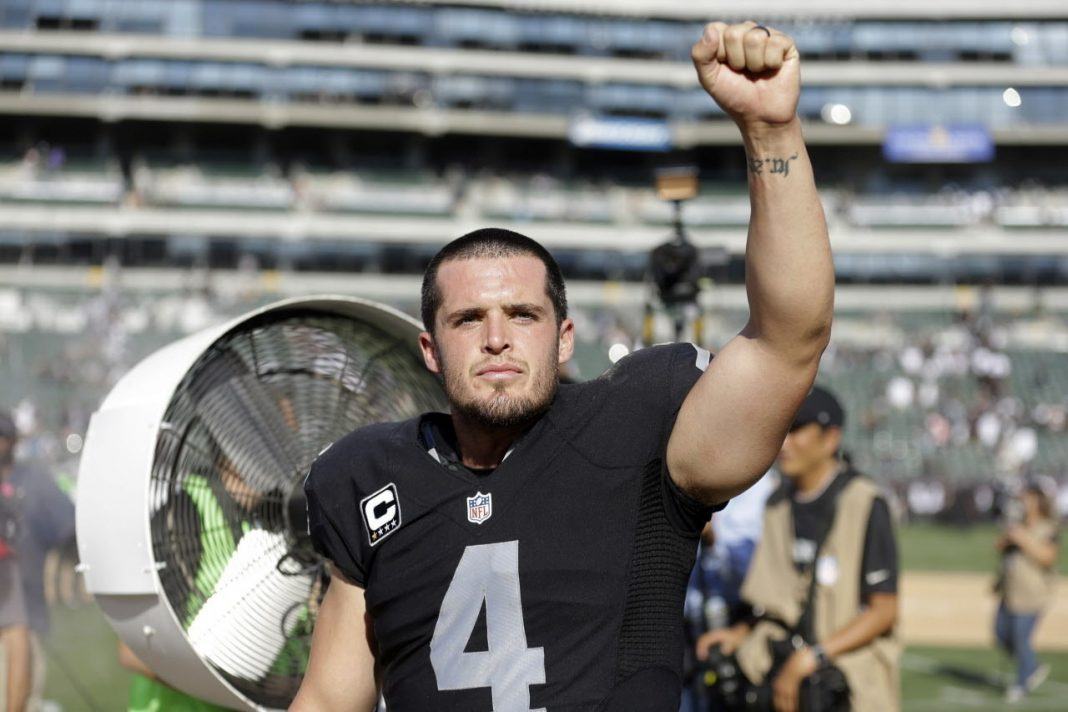 Oakland Raiders quarterback Derek Carr made sure that both his team and family were taken care of when he signed a five-year contract extension Thursday that will keep him with the team through the 2022 season.

While his $25 million per year deal can be easily surpassed by other NFL quarterbacks, he just wanted to not have any lingering issues as he headed into training camp.

Carr tweeted that an agreement had been reached to add five years to his current rookie deal that expires after this season. The contract will be worth $125 million, according to a person familiar with the deal who spoke to The Associated Press on condition of anonymity because terms were not released. NFL Network first reported the terms of the contract.

Now it's done 😂! From the jump I've wanted to be a Raider 4 life. One step closer to that! Blessed!!! Business done! Let's just play now!!!

The Raiders are counting on Carr to be the face of the franchise when it moves to Las Vegas for the 2020 season and are paying him that way. The $25 million per year in new money is the richest contract ever in the NFL, beating out the $24.8 million a year Andrew Luck got from Indianapolis.

“We figured out a way to do it so that we have the opportunity to sign the other guys that I think are important to this organization,” Carr said. “That was really important to me. Not to just take every single dime that we could. I hope that that’s known. Obviously, the position that I play, it has to be around a certain number. It just is what it is. At the same time, I told (my agent), if we can structure it in a way to help the Raiders get the other guys, give them an opportunity to come in, that that would be really important to me too.”

Both sides had expressed a strong interest in signing a long-term deal with Carr, who was scheduled to enter the final year of his rookie contract. Carr had imposed a deadline of the start of training camp in late July.

Carr has transformed the Raiders from a perennial loser into a contender after being drafted in the second round in 2014. He was part of a stellar draft class led by AP Defensive Player of the Year Khalil Mack and third-round guard Gabe Jackson, who have been key to Oakland’s turnaround.

He lost his first 10 starts as a rookie before winning seven games his second year and taking the Raiders to the playoffs in 2016 with a 12-4 record. Carr missed the final game of that season and the playoff loss to Houston with a broken leg.

But he’s healed now and a major reason why the Raiders are the preseason favorites to win the AFC West and contenders to dethrone the New England Patriots as the top team in the conference.

Carr has thrown for 11,194 yards in his first three seasons and ranks fourth all-time with 81 touchdown passes through three years, trailing only Dan Marino, Luck, and Peyton Manning. He has shown dramatic improvement each season in his career after an up-and-down rookie campaign when he threw 21 TD passes, but averaged only 5.5 yards per attempt.

Carr’s best season came in 2016 when he led seven fourth-quarter comebacks while completing a career-high 63.8 percent of his passes. He threw for 3,937 yards with 28 touchdowns and only six interceptions in just 15 games.