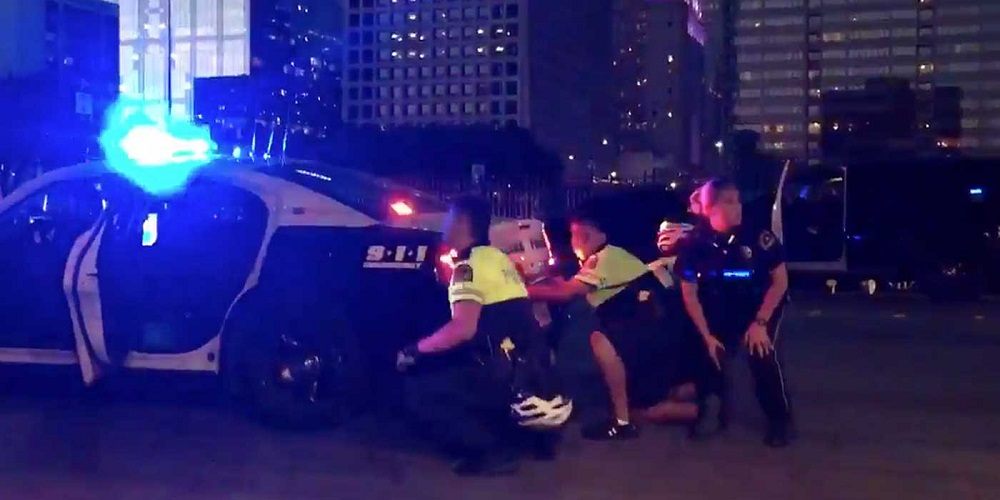 Several shooters fired upon Dallas police officers killing five and wounding six during a Black Lives Matter protest in the downtown area, making this the deadliest single attack upon US law enforcement since September 11, 2001.
[springboard type=”video” id=”1641819″ player=”mtvt006″ width=”480″ height=”400″ ]
This event happened right on the heels of the police shootings of two black men in Minnesota and Louisiana this week which were both caught on camera.

Gunfire rang out Thursday night as demonstrators marched against the shooting deaths of two African-American men by police in Louisiana and Minnesota.
A total of 11 officers were shot, and some of the six officers injured are undergoing surgery, authorities said.
It was the deadliest single attack on law enforcement since the 2001 terror attacks, when 72 officers died, according to the National Law Enforcement Officers Memorial Fund. 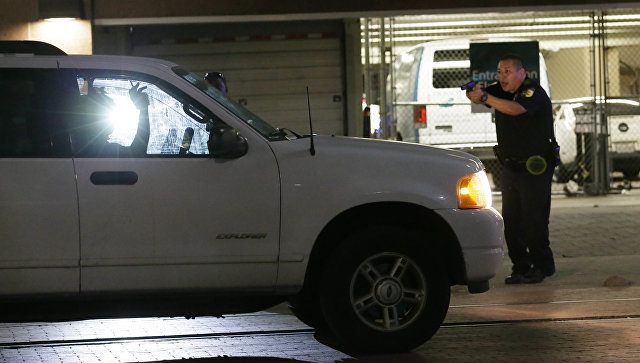 People Killed by Police in the US in 2016 | Graphiq
— A total of 10 police officers were shot by snipers during the protests, Dallas Police Chief David Brown said. An 11th officer was shot during an exchange of gunfire with a suspect, authorities said.
— Brown said it’s unclear how many suspects were involved, but three people are in custody.
–– Dallas police negotiated and exchanged gunfire with a suspect for hours at a parking garage in downtown. That suspect is dead, a law enforcement official told the media. The official did not say how the suspect died.
— K-9 units are sweeping the area for possible bombs.
— “The suspect told our negotiators that the end is coming,” Brown said. The suspect at the garage also told negotiators more officers are going to get hurt, and that bombs are planted all over downtown Dallas.
— Two of the shooters were snipers, who fired “ambush-style” from an “elevated position,” Brown said.
— Officers killed include one DART officer. DART, the Dallas Area Rapid Transit agency, operates buses and commuter rail in the city and surrounding suburbs.
— DART identified the officer killed as Brent Thompson, 43. He joined the transit agency in 2009, and was its first officer killed in the line of duty, DART tweeted.
— The Dallas Police Department circulated a photo of a man they said was a suspect in the shooting, but later called him a person of interest and said he turned himself in.
Number of People Killed by Police in the US by Race | Graphiq
— Witness Ismael Dejesus said he filmed the shooter from his hotel balcony about 50 yards away. He described the gunman as wearing tactical pants and a tactical shirt. He had a weapon with a “pretty big magazine,” he said.
— “He got out of there, walked over to the pillar, put a magazine in and started firing,” he said. “It did look planned. He knew where to stand, he had ammo ready.”
— Retired FBI special agent Steve Moore said an attack of that magnitude required advance work.
— “This was an attack planned long before– waiting for an opportunity to go,” Moore said. “I think there was so much logistically, ammunition-wise. They may not have planned the location, they may not have planned the vantage point. But they had prepared for an attack before last night’s shooting is my guess.”
— President Barack Obama has been notified about the shooting, and a team is keeping him updated, the White House said.

Witnesses said the protesters were marching peacefully when the gunfire started. Crowds scattered.
“In the midst of it, gunshots just started barreling out,” witness Michael Jackson told media outlets. “I immediately started running the opposite way.”
G.J. McCarthy said he thought it was fireworks at first. It got louder, and protesters realized it was gunfire.
“That went on for a while,” he said. Crowds ran into a parking garage, then spilled out after word spread that there was a sniper nearby.
Clarissa Myles was eating at a McDonald’s nearby when peaceful protests suddenly turned chaotic.
“Everyone was screaming, people were running,” she said. “I saw at least probably 30 shots go off.”
Dallas attack occurred right after Minnesota and Louisiana killings:
The shootings occurred as Americans nationwide took to the streets to demand answers over the killings of two black men in two days. They wept, marched and chanted “Black Lives Matter!”
Crowds gathered outside Gov. Mark Dayton’s residence in St. Paul, Minnesota, miles from the spot where an officer killed Philando Castile in a car on Wednesday.
Hundreds of miles away, more protesters marched outside a convenience store in Baton Rouge, Louisiana, where Alton Sterling was fatally shot Tuesday while police tackled him in a parking lot.
“We are targets,” LaRhonda Talley said in an impassioned speech in Minnesota. “We made it across the transatlantic. We made it to freedom and you’re still killing us. You’re still hanging us from trees. You’re still killing us. Our lives matter! My son’s life matters. He matters to me … just like everybody’s son matters to their mama.” 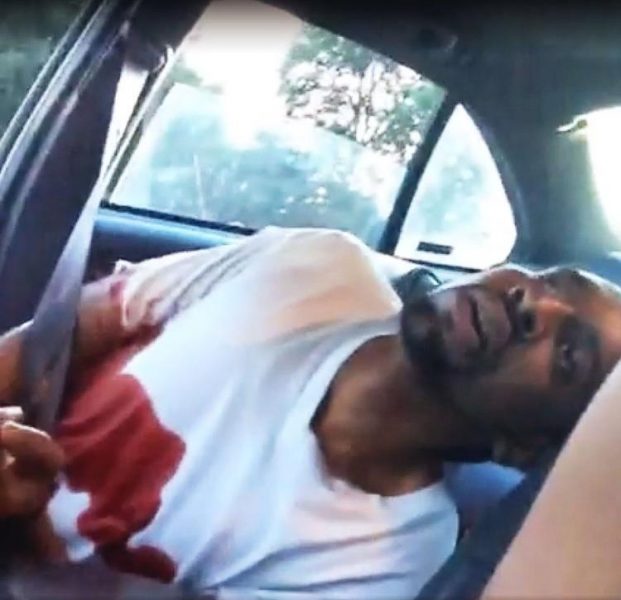 As has become a horrible norm, both killings were captured on video and posted online.
In Minnesota, the shooting of Castile was remarkable — and heartbreaking — because his fiancee live-streamed it.
As their 4-year-old sat in the backseat, she calmly narrated the action and showed viewers the dying man groaning and bleeding in the front seat.
Castile, a school food services worker, was shot in Falcon Heights, outside Minneapolis, when a police officer pulled him over because of a broken taillight, said his fiancee, Diamond Reynolds, who was in the car with him.
“He let the officer know that he had a firearm and he was reaching for his wallet and the officer just shot him in his arm,” Reynolds said as she broadcast the Wednesday shooting on Facebook.
“Oh God, please don’t tell me my boyfriend is dead,” she later says. 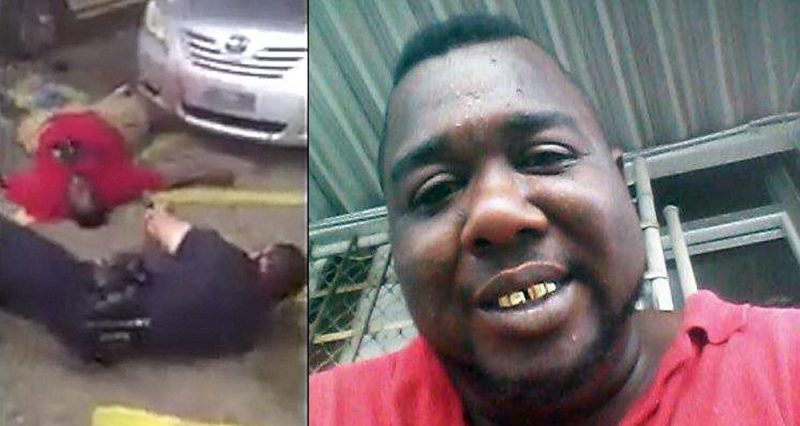 Sterling, 37, was killed Tuesday near a convenience store in Baton Rouge, where he regularly sold CDs and DVDs.
A homeless man approached Sterling on Tuesday and asked for money, becoming so persistent that Sterling showed him his gun, sources told media outlets.
The homeless man called 911 and police arrived at the store. Police tackled Sterling to the ground, and shot him several times, video shows.
A law enforcement source told media outlets that the officers pulled a gun from Sterling’s body at the scene. No further details were provided on the type of firearm.
The convenience store quickly became the site of protests. Flowers and signs piled up in a makeshift memorial. Protesters chanted “Hands up, don’t shoot,” the line made famous in the Michael Brown shooting in Ferguson, Missouri, about two years ago.
Most major cities, including Chicago and New York, held protests against police shootings Thursday night.