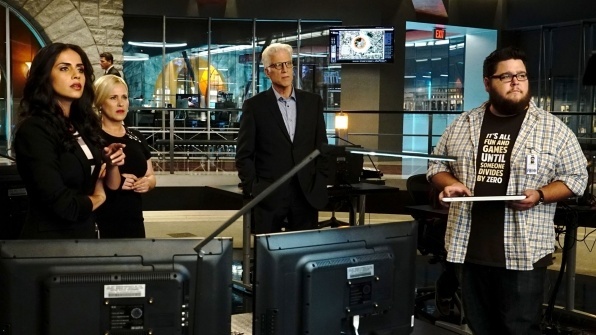 On this week’s episode of “CSI: Cyber,” Agent Mundo told his daughter, Michelle, a Halloween themed bedtime story. Michelle stopped him and told him that he wasn’t telling the story correctly. She then told her version of the story and said that was the version her granddad told her. Michelle asked Agent Mundo why granddad hadn’t come over their house and wanted to know if he was mad at her. That was when Agent Mundo told Michelle that her grandfather was sick.

In a lab, the tech was not able to retrieve needed information from a cell phone and said they needed Daniel to do it. Agent Pierce, the tech’s boss, then went to FBI headquarters to speak to Daniel. She said she was an Agent with the Violent Crimes Squad of the FBI. She told him his help was needed to find two missing children from Richmond, Virginia.

Agent Ryan helped Ross get ready for a date with a woman he met on the Internet. She was ready for a business date with a Sergeant to discuss how to catch one of the FBI’s most wanted hackers. Agent Ryan then told Russell that she knew Raven and Nelson were dating now. She said that both of them had been cut off from all of their friends because all of their friends were illegal hackers, so Raven and Nelson only had each other. Agent Ryan said she didn’t think they would last as a couple because they were too much alike.

Agent Pierce watched Daniel examine the phone for clues. She said the phone had been found submerged in a fountain three years ago and that it was the only thing they had that would help them start to track down the missing children, two preteen boys. A picture of each boy was acquired, and Agent Ryan questioned Agent Pierce. Pierce told Ryan that the boys had been spotted coming home from school, but an hour later when their mother got home from work, they were gone. Daniel found some disturbing image files on the phone, which belonged to Luke, one of the missing boys. The image was an Internet horror meme that had gone viral. Daniel found malicious codes within the image. He traced the image to a site called Red Crone, made up of images Internet users had uploaded to the site. There was a video of Luke and his brother Jacob posted on the site. The post had been created at 3:00 when the boys got home from school. In the video, the boys said they were the chosen ones, and they were going to meet the Red Crone.

Nelson found an app that Luke had downloaded to his phone. Raven found pictures of Red Crone that were taken in various locations around Richmond. Nelson opened the app and found that it was a Red Crone viewer that displayed images in black and white. The viewer was similar to viewers used on Instagram but didn’t give the user the option of taking a picture.

Agent Ryan went to see the boys’ mother, Mrs. Sullivan and showed her the video of the boys saying they were going to meet Red Crone. Agent Mundo looked at the video and saw Luke holding a paper which he thought might contain directions to where the boys went. They went to the family’s printer and discovered the paper was an invitation to see Red Crone.

Daniel and Russell went to where the boys were last seen. Agent Mundo texted Raven with a picture of the invitation and told her to try and figure out who sent it. She found that someone on the Red Crone website sent the link to Luke for the invitation. Then Nelson realized the viewfinder was actually a decoder. When he viewed the invitation with the decoder, a message popped up telling the recipient where to go. They realized that the boys had been directed to go to a fountain that Russell, Daniel, Agents Mundo and Ryan were standing at. They pointed the decoder in the direction of the fountain and saw what the boys did. Russell said the boys were being sent on a virtual treasure hunt. Agent Ryan said that there was no treasure for getting to the final destination, just danger.

An unknown man got a phone call from his boss to come to work, but the man said he had plans for the day. His boss told him he had to come to work anyway. The man, a sketch artist, arrived in a courtroom while a case was being heard.

More clues from the decoder sent them to a graveyard where they found fresh blood on the grass. Russell used a device to analyze the blood and said it had been on the grass for less than an hour. They followed a trail of blood to a boy named Timmy, who was trying to get to Red Crone.

Nelson and Daniel determined they could find out who has behind all of this based on the app they bought that caused so many problems. They found one man in Richmond, named Oliver, who had downloaded the application. Agents Mundo and Ryan, along with Daniel, went to Oliver’s house and saw paintings on his walls similar to the Red Crone’s appearance. Daniel figured out Oliver was the unknown man called into work.

Agent Mundo and several other FBI agents went to the court to confront Oliver. By the time they got to the courtroom Oliver had been in, it was completely empty. Nelson and Raven determined that the boys were headed to a state park. Russell found Luke’s hat on the ground. They found an abandoned schoolhouse, where Oliver was hiding, but he was gone. Oliver then opened a door in another building and Jacob and Luke were standing there. Agent Mundo found Oliver and he was arrested. The boys’ parents came to the scene and took them home.