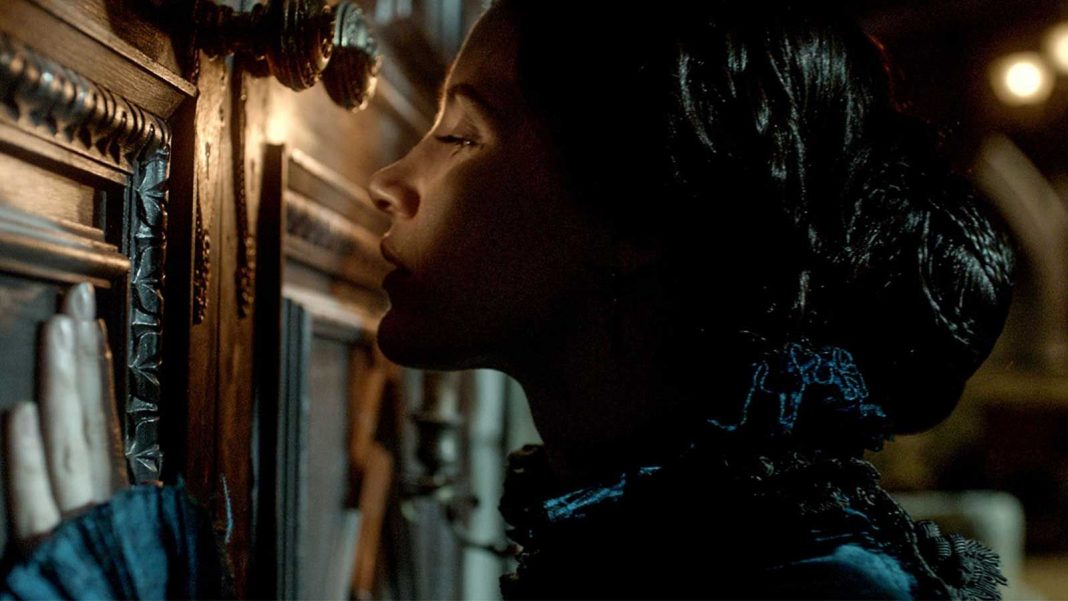 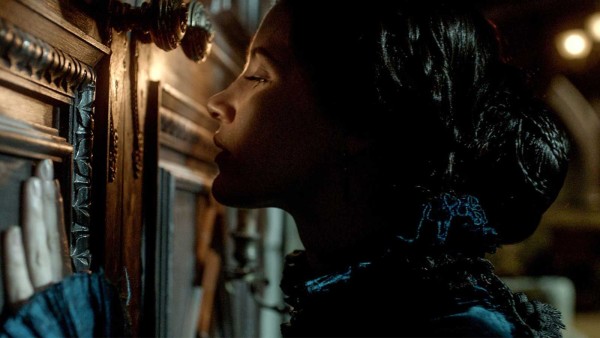 The movie Crimson Peak just arrived in theaters in time for Halloween. The movie is about a young woman named Edith who marries the seductive Sir Thomas Sharpe. Shortly after they wed, Thomas takes her to live with him in his remote Gothic mansion set in the English hills. Living with them is Thomas’ sister, Lady Lucille, who is protective over the mansion and the family secrets that lie within it. Since Edith is able to communicate with the deceased, she tries to decipher the mystery behind the mysterious visions that have begun haunting her since she moved into her new home.

The movie was written and directed by Guillermo Del Toro, who is known for writing such screenplays as The Hobbit: An Unexpected Journey and Pan’s Labyrinth. Mia Wasikowska of Alice in Wonderland stars as Edith, alongside co-stars Tom Hiddleston (Avengers) and Jessica Chastain (Interstellar/Zero Dark Thirty).

Director Del Toro brings a blend of psychological horror and gothic beauty to this film that plays with the realm of dark fairy-tales. He chooses to set the story in the year 1901, where he could emphasize contemporary gothic visuals throughout the film.

Crimson Peaks is set in Allerdale Hall, which is a well-known gothic mansion that sits atop the English hillside. The hall is located in the middle of a bleak, barren landscape and is perched above a red clay deposit – hence the name “Crimson Peak.” The Hall was originally a complex set that Del Toro had constructed in his mind. However, while writing the script the house quickly became one of the most compelling characters of the story and therefore, Del Toro had a crew work endlessly for six months to create a replica of what he had been envisioning when writing Crimson Peak.

Unique to most sets, Allerdale Hall was built like an actual house, complete with ceilings and hallways that connected all the rooms. Basically, the equivalent of 10 sets were all made into one. Del Toro wanted to ensure he was able to seamlessly film the scenes authentically and not to use any digital stitching of shots in post-production.

In order to showcase the film’s visuals, Legendary and Universal pictures are also releasing Crimson Peaks in IMAX. Therefore, IMAX has released a short featurette that explains the film’s “Throwback to Gothic Horror.”

The featurette begins with lead actor Tom Hiddleston, who plays Sir Thomas Sharpe, explaining that director and writer Guillermo Del Toro wanted to make a “classical gothic romance.” Going on to say he wanted to, “reclaim the horror genre to infuse it with a classical tone to make it romantic again.”

Next, Guillermo is shown explaining the inspiration behind the film. He states, “There is a beautiful genre called Gothic Romance that combines an almost fairy tale, dark atmosphere, ghostly, supernatural but very classy with a heightened melodrama.” He goes on to explain that this particular genre used to be much more common in Hollywood, as big budgets and production efforts were put towards creating such films. However, after the 1950s and 60s, he felt that Gothic Romance “got lost,” and therefore Crimson Peaks was his way of bringing it back.

The featurette also shows Academy Award nominated actress Jessica Chastain discussing how the house itself became a character in the film. She feels that the movie is almost a “throwback to another era,” as the set was built so intricately and with so much detail. Actress Mia Wasikowska notes that the built-to-scale mansion helped the actors embrace the world that is showcased within the movie. It truly gave them a sense of the story that Del Toro was trying to tell through his script and visuals. She also claims that it was the “most amazing, beautiful set [she] has ever seen,” which is an impressive feat considering she was on set of the imaginative Alice and Wonderland.

By seeing the film in IMAX, Jessica explains that you are not simply watching the film…you are “experiencing it.”

With the incredibly high attention to details, both the movie’s set and story brings audiences into another era. With a mansion that is as much luxurious as it is dark and spooky, Crimson Peaks puts a new high-quality spin on the typical Halloween thriller.

You can immerse yourself into the world of Allerdale Hall now that Crimson Peaks is in theaters everywhere.