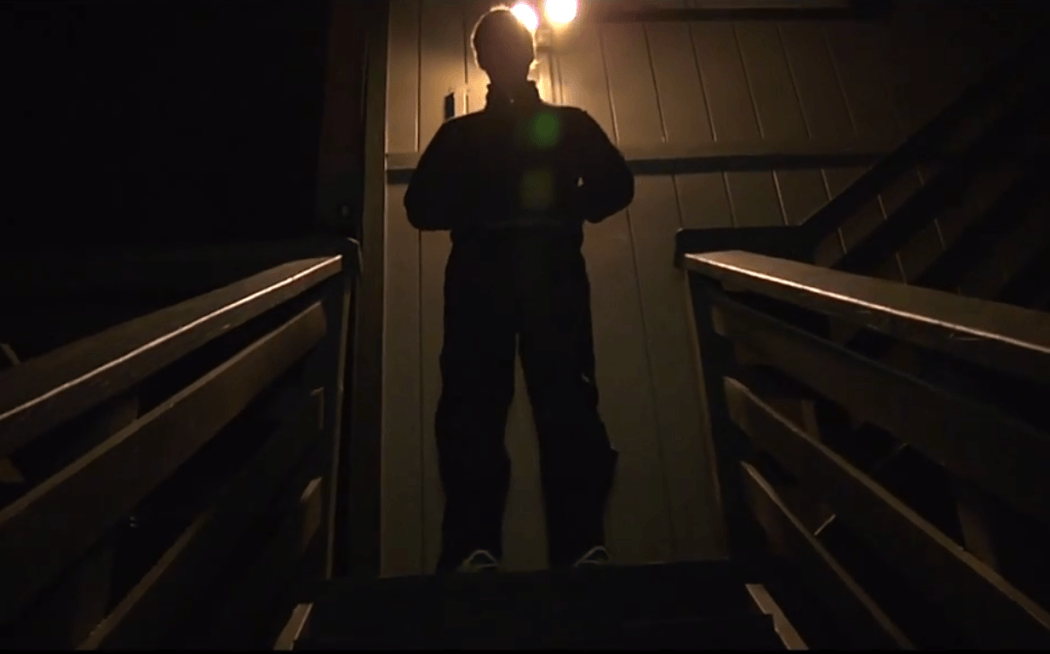 Creep is a horror/ drama recently released on Netflix streaming, but was originally made and released in 2014. Although it has a very plausible concept that carried it a long way, it is very hard to take it seriously at times. While the concept of the movie is plausible, the actions of the main character is so stupid it’s hard to swallow if this could really, really happen. The story starts out with Aaron, a videographer, answering a one-day job ad to film a man in a remote cabin town. When I say remote, I mean there is no one else around but his crazy ass client. Why anyone uses Craiglist anymore after the multiple serial killers who have come from it, is beyond me. But, this guy does apparently! It’s hard to believe that when this guy sees where the client lives he doesn’t turn around and flee right away, but he doesn’t and the guy is super creepy from the very beginning.

The client Josef, tells Aaron that he wants him to record him for the day because he’s dying of terminal cancer. He wants to give the tape to his young son who he doesn’t get to see a lot so he will know him long after he dies. This seems heartfelt and even a little emotional, but things get weird quickly. When Josef goes to the bathroom and starts removing his clothes you instantly get very uncomfortable along with Aaron. He wants Aaron to record him in the bathroom, which seems widely inappropriate for a video that will be seen by his son. He tells Aaron to get comfortable because they’re going to go a lot deeper than this.

During the bathroom scene Josef goes on to tell a story about how his father would dress up in a wolf mask. Supposedly it would comfort him and it was great father/son bonding. It actually sounds like a creepy case of child abuse though. It was so uncomfortable watching this guy talk about this creepy memory in the bathtub, while watching him squirm around like an 8 year old kid. Horror doesn’t always have to be blood-and-guts. Sometimes, horror just hits it’s mark by being uncomfortable. There were times I wanted to look away from the screen because you felt equally as creepy watching this guy.

It’s worth mentioning that even though there are only two people in the entire film, the performances are not equally yoked. Patrick Brice who played the naive videoagrapher Aaron is also the director of the film. He should have just stuck to being the director because his acting skills were so poor it made some scenes near the end a bit comical. I didn’t buy him at all as a man truly afraid for his life. His performance felt like film school acting. Mark Durplass on the other hand as the creep Josef, is extremely creepy and believable as someone who is clearly not right in the head. Though he plays the character well, the movie would have benefited by making the character a little less creepy. Toning down some of the “creep” factor wouldn’t have given away his obviously off personality so quickly.

One of the most disturbing scenes of the movie for me is when Josef asks to tell Aaron something he’s supposedly never told another person before. He wants the camera cut off as well. Aaron does so-but he does leave the audio on. What happens next is pretty disturbing. He accuses his wife of engaging in some very perverse activities. When he feels like their marriage is about to crumble in the midst of the accusation, he does something even more unsettling. The entire story sounds completely made up and unrealistic, but you’re left wondering why would he lie about this? Why would he make this up and why would he tell a complete stranger this story? It’s from this point on that you know something is deeply wrong with this guy, and the film takes a completely dark turn. After Josef is knocked out with some drinks, Aaron receives a pretty frightening phone call from someone saying he needs to leave the house right away. When asked if this is his wife, the woman says she’s his sister and he really needs to get out of the damn house! It’s a pretty cliched scene, but yet, it still has its place.

Again, the scene where Josef chases Aaron around wearing a scary wolf mask is borderline comedic. Yes, it’s scary that Josef is torturing his guest with this stupid mask, but on screen it just comes across as silly. The only way you can take it seriously, is if you put yourself in the place of Aaron. Even though it looks stupid on screen, it would be totally frightening to be chased around the house by a freak wearing a wolf mask and when he grabs an ax, you know he means business.

The third act of the movie, though poorly acted by Patrick Brice, is the most interesting part. Josef can’t leave Aaron alone once he escapes his house. He proceeds to send him a creepy video tape along with a baby wolf stuffed animal.Aaron starts to hear strange noises outside of his house. His fears of Josef returning are confirmed when Josef leaves another creepy video for him- only this time the DVD was left on the windowsill by his bed. The video is Josef apologizing for the last creepy video and asking for Aaron to meet him at a park so they can have “closure.”

In another unbelievable turn of events, Aaron actually meets Josef in a obviously isolated park! Could anyone really be that freakin’ stupid? What happens next is both shocking and believable. It’s about the only believable thing in the entire film. The ending is interesting and the best part of the film.

I can only recommend this movie to horror fans with absolute patience. Even if you’re like me and like slow-burners, this film will be a challenge for you as it has some down right boring spots. The indie effort put behind it though is admirable, and it is certainly not the worst horror indie film to hit Netflix this year. Different viewers will see a different movie.