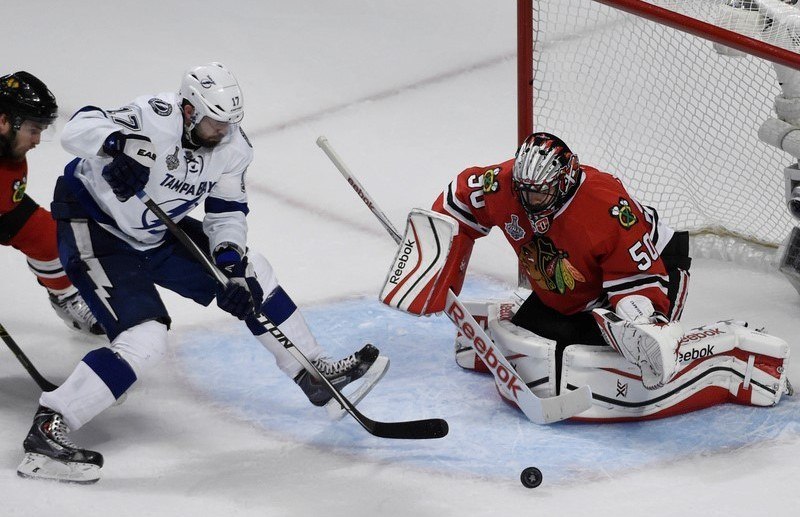 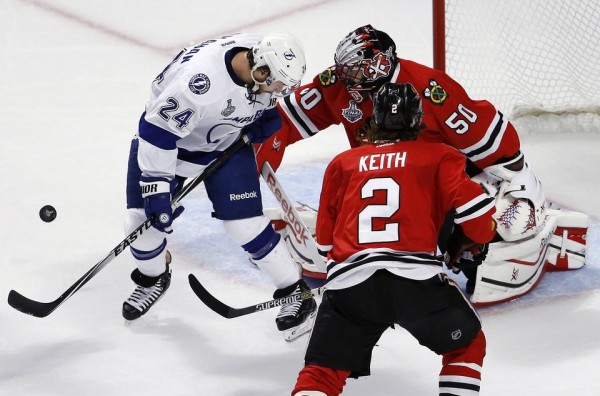 Corey Crawford’s performance as goalie for the Chicago Blackhawks may be as mercurial as a Kardashian encountering hostile press, but game 4 of the 2015 Stanley Cup Finals made fans realize that he can come through when needed. The Tampa Bay Lightning were up one game on the Blackhawks, but Crawford amped it up for his team and helped get them to tie everything up.

Chicago’s favorite lightning rod withstood a late barrage from the Tampa Bay Lightning to preserve a 2-1 victory that tied the Stanley Cup Final at two games apiece on Wednesday night.

”We’re impressed,” said captain Jonathan Toews, who scored his first goal of the series. ”But we’re definitely not surprised that Crow shows up and plays the way he did.”

That’s the way it’s been with Crawford ever since he became the regular goalie during the 2010-11 season.

He’s been brilliant at times, and he helped Chicago win a championship two years ago. But there have also been some rough stretches.

That included a benching for poor play early in the playoffs. But there was no doubt Crawford was at his best in this game, particularly during the final minute or so. Instead of falling into a deep hole, the Blackhawks tied the series with Game 5 at Tampa Bay on Saturday and a guaranteed Game 6 at home on Monday.

They can thank their goalie for standing his ground near the end. 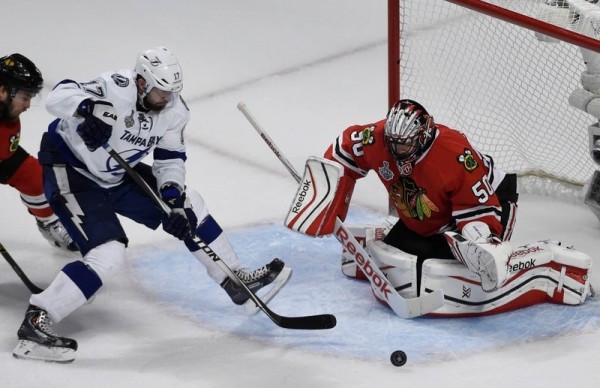 ”We saw in 2013 what he’s capable of doing,” coach Joel Quenneville said, referring to Chicago’s Stanley Cup run. ”This season, regular season-wise, he was outstanding. So we’re happy to have him. We know the way he prepares and likes the battle.”

They also know what a target he is for Blackhawks fans frustrated by the soft goals he has a tendency to let in. Quenneville even benched Crawford in favor of Scott Darling for part of the first-round series against Nashville, after he gave up three goals in the first period of the opener and again after a 6-2 loss in Game 2.

He eventually returned in that series and has been solid since then in the playoffs, helping the Blackhawks get past the Predators, Minnesota and Anaheim.

But he could not have been better near the end on Wednesday.

”He stayed calm and poised in the net, nothing new that we haven’t seen from him,” Patrick Kane said. ”He’s a big part of our team. Obviously, we have a lot of confidence in him and he shows us night in and night out what he can do back there.”

Quenneville called it a ”goalie win,” a far different cry then after Game 3 when he said Crawford’s play was ”just OK”.

”Loved how he battled,” the coach said. ”He’s a battler. Great illustration how he stayed with it, how they swarmed us at the end. His movement, he was following the puck. He was big. Nice response.”

Crawford stopped 24 shots in the game and was fearless with time winding down and the Lightning firing away after pulling goalie Andrei Vasilevskiy. He made some neat stops and Tampa Bay star Steven Stamkos missed wide from point blank range.

”It was pretty intense there,” Crawford said.

”He’s been a huge part of our success,” Toews said. ”Every time things maybe don’t quite go our way for a couple games, for some reason he’s the one who takes the majority of the responsibility. I don’t know why. I mean, at the end of the day he’s a selfless player and a great teammate. He’s ready for whatever.’