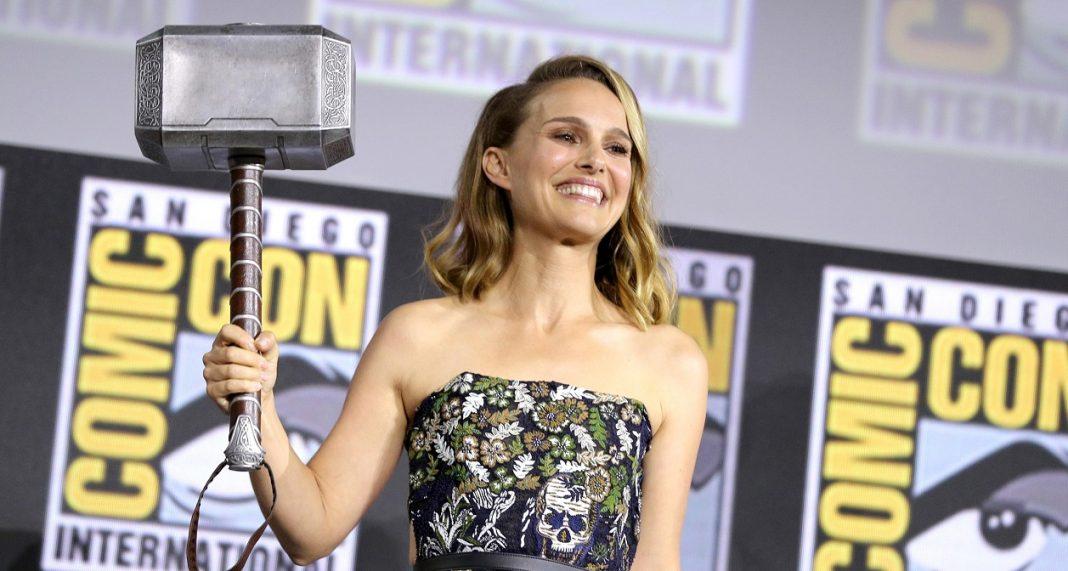 Marvel is making up for his lack of presence last year at Comic-Con this year on Day 3 making MCU fans very happy with some big changes and reboots. The stars truly lined up today with everyone from Chris Hemsworth, Angelina Jolie to Tom Hiddleston showing up.

“Avengers: Endgame” may have closed a chapter in the Marvel Cinematic Universe, but the blockbuster factory is not slowing down and only expanding in scope and diversity.

Marvel Studios President Kevin Feige led a marathon presentation at San Diego Comic-Con Saturday night, announcing plans for the first two years of “Phase Four,” which will include Natalie Portman taking up the hammer as Thor, making Angelina Jolie an immortal for “The Eternals” and rebooting “Blade” with Mahershala Ali.

The stars assembled in the San Diego Convention Center’s Hall H as Feige ticked through the release calendar for 2020 and 2021 movie by movie, giving official cast lists, release dates, titles and logos for everything from “Black Widow,” the “Doctor Strange” sequel, “Thor 4” to “Shang-Chi” to “The Eternals.”

“I’m so excited to be here,” Jolie told the crowd.

She said she’s going to work “10 times harder” than she has on any of her other action roles because she knows what it means to “be part of the MCU” and “part of this family.”

Jolie, who is playing the character Thena, was joined by her “The Eternals” cast mates including Richard Madden, Kumail Nanjiani, Salma Hayek and Brian Tyree Henry, as well as director Chloé Zhao.

“I just really, really wanted to make a Marvel movie for so long,” Zhao said.

It’s set for release on Nov. 6, 2020, after “Black Widow” kicks things off on May 1 with Scarlett Johansson, as well as “Stranger Things” breakout David Harbour, Rachel Weisz and Florence Pugh. Audiences got a look at some early footage from the Cate Shortland-directed film showing Johansson and Pugh in some Bourne Identity-style hand-to-hand combat.

Marvel also revealed that newcomer Simu Liu will be playing the lead role in “Shang-Chi and the Legend of the Ten Rings,” directed by Destin Daniel Cretton and coming to theaters on Feb. 12, 2021. He’ll star alongside Awkwafina and Chinese actor Tony Leung, who is playing The Mandarin.

“This is the craziest, craziest dream,” said Liu, who was literally cast on Tuesday.

The third film of 2021, after “Doctor Strange in the Multiverse of Madness,” which director Scott Derrickson said will be Marvel’s “first horror movie,” is perhaps the most anticipated, however: “Thor 4.”

Portman, who played Jane in the first two Thor films, will be remerging as the female Thor. She ran out on stage to thunderous applause and accepted the hammer from a kneeling Taika Waititi.

Chris Hemsworth and Tessa Thompson, who alluded to her character identifying as LGBTQ, will also be returning for the Waititi-directed “Thor: Love and Thunder,” which is set for release on Nov. 2, 2021.

Feige brought out some familiar MCU stars from Tom Hiddleston and Sebastian Stan to Elizabeth Olsen and Jeremy Renner to tease some of the upcoming Disney+ “event series” including “Hawkeye,” ″The Falcon and the Winter Soldier,” ″WandaVision,” ″Loki” and the animated series “What If…?”

Fans were excited to learn that the little girl in Captain Marvel, Monica Rambeau, will be joining “WandaVision” as a grown woman played by MCU newcomer Teyonah Parris.

The energy in Hall H was electric for what was easily the most high-profile and anticipated presentation. The audience only knew going in that Feige would be joined by some “special guests.”

Tense security guards managing the estimated 8,000 people in the room even inadvertently snapped at “Endgame” directors Joe and Anthony Russo, who were trying to figure out where to go in the melee.

Although the studio took a year off from Comic-Con last year, it has a long history of announcing some of its biggest plans at the fan convention.

Nine years ago, Marvel wowed Hall H when the Avengers, including Robert Downey Jr., Scarlett Johansson, Chris Evans and Chris Hemsworth, appeared on stage for the first time together. It’s also where the studio introduced Brie Larson as Captain Marvel three years ago and brought the house down with the first look at “Black Panther.”

And even though the presentation hardly took a breather, there were still a number of upcoming films, some rumored and some confirmed, that they couldn’t get to including “Black Panther 2,” ″Guardians of the Galaxy 3,” ″Captain Marvel 2″ and even, Feige teased, “Fantastic Four” and “Mutants.”

“But all that stuff is rumored,” he said with a smile.

He closed out the presentation dropping the “Blade” reboot news and Ali’s casting, which hadn’t yet even become a rumor to speculate about. Wesley Snipes played the character in the 1998 film and two sequels.

Ali came out on stage and put on a “Blade” baseball cap as the crowd went wild. No other details were revealed about the project.

Marvel’s impact on Hollywood over the past 11 years is hard to understate. This year alone, three of the top five movies are Marvel properties (“Avengers: Endgame” is No. 1, “Captain Marvel” is No. 2, and “Spider-Man: Far From Home” is currently No. 5 after just three weeks in theaters).

They also account for three of the top five grossing domestic release of all time, unadjusted for inflation. “Star Wars: The Force Awakens” holds the first place spot, but then comes “Avengers: Endgame” at two, “Black Panther” at four and “Avengers: Infinity War” at five.

And combined, with over $22.3 billion in worldwide earnings, the Marvel Cinematic Universe is by far the most successful franchise of all time.

With the recent partnership with Sony on Spider-Man and the Walt Disney Co.’s acquisition of Fox, all the missing pieces (including X-Men, Deadpool and The Fantastic Four) are coming together too under the Marvel Studios banner.

Feige also said Saturday that in just a few days, not accounting for inflation, “Avengers: Endgame” will also surpass “Avatar” as the highest grossing film of all time.

He even brought his top Marvel Studios people out on stage to celebrate the moment of having completed the 23-movie “Infinity Saga.”

“We started here,” Feige told the room of screaming fans. “I never thought it would happen, and it never would have happened if it wasn’t for you.”