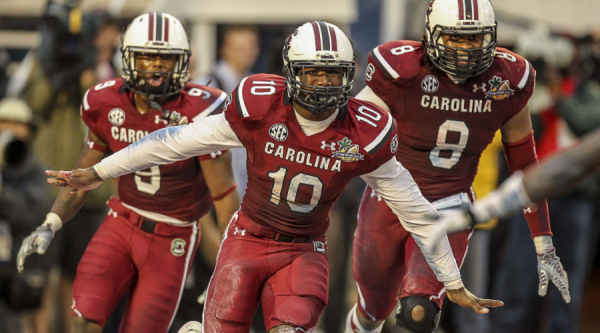 The 2015 college football season got off to a grand start with a long Labor Day weekend full of interesting matchups. The weekend started early with a Battle of the Carolinas and ended on Monday night with a rematch between defending national champion and Virginia Tech, the team that had handed the Buckeyes their only loss a year ago. Here is a look at the winners and losers in this first weekend of college football.

Speaking of SOUTH CAROLINA, the Gamecocks defense led by middle linebacker Skai Moore, came through holding North Carolina to just 13 points despite giving up 440 yards of total offense. Moore wound up as the game’s MVP with not one, but two, interceptions in the Tar Heels’ end zone. The two picks in the end zone made all the difference as South Carolina won 17-13.

BAYLOR showed that it is now capable of reloading as the Bears put up 56 points in a season-opening win over SMU. Quarterback Seth Russell stepped into Bryce Petty’s former spot and performed admirably completing 15-of-30 passes for 376 yards and five touchdowns. He also ran for 59 yards in Baylor’s 56-21 victory.

Ole Miss quarterback Chad Kelly answered some questions about who would take over the Rebels offense in 2015. Kelly completed 9-of-15 passes for 211 yards and two touchdowns as the 17th-ranked Rebels defeated Tennessee-Martin 76-3. One of Kelly’s touchdown passes was to 6-5, 295-pound All-SEC defensive end Robert Nkemdiche.

The Illinois football program showed its resiliency by overcoming the dismissal of head coach Tim Beckman amid some scandal and defeating Kent State 52-3 in its season opener. Interim head coach Bill Cubit, a former head coach at Western Michigan, rallied the Illini after the game was postponed on Friday night and played on Saturday. Beckman had been fired just eight days before the first game after an investigation found that he had interfered with players’ medical evaluations and decisions. The Illini rolled up 38 first-half points on their way to victory.

NOTRE DAME proved it is a force to be reckoned with after a 38-3 thrashing of Texas. Irish QB Malik Zaire missed on only three pass attempts going 19-of-22 for 313 yards and three touchdowns. Zaire’s 86.6 percent completion rate was the second best in school history. Standout wide receiver Will Fuller caught two TD passes and C.J. Prosise ran 20 times for 98 yards.

STANFORD may be in for a long season. The once-dominant Cardinal defense and running game was everything but in a 16-6 loss to Northwestern to open the year. The Wildcats pounded their way to 225 yards on the ground led by Justin Jackson who had 28 carries for 134 yards. Freshman quarterback Clayton Thurson, who scored the game’s only touchdown, ran eight times for 68 yards. The Northwestern defense made a statement in holding Stanford to just 85 yards rushing. Senior QB Kevin Hogan went 20-of-35 for 155 yards. He threw an interception in the end zone in the game’s final seconds.

RELATED NEWS
2014: The Beginning Of A New Era In College Football

Washington head coach Chris Petersen is trying to build a winner at Washington. It’s too bad he built such a winner at Boise State. The Broncos welcomed Petersen’s Huskies to the blue turf and held on for a 16-13 win. Washington fell behind 16-0 in the first half but nearly pulled off the upset. Freshman QB Jake Browning took the Huskies downfield in the game’s final minute setting up a 46-yard field goal attempt with just 21 seconds left. Huskies kicker Cameron Van Winkle, who had connected from 28 and 40 yards earlier, missed the kick sailing wide right. Washington was 8-6 last season and Petersen has some work to do to make sure the Huskies can at least hit that mark again.

Arizona won its opener, 42-32, over Texas-San Antonio. The Wildcats could never pull away from the pesky Roadrunners, but the bigger problem is the Arizona defense. Its star, linebacker Scooby Wright, suffered a knee injury early in the game and could miss three to four weeks. Wright, winner of the Nagurski Trophy and Lombardi Award last year, suffered a torn lateral meniscus.