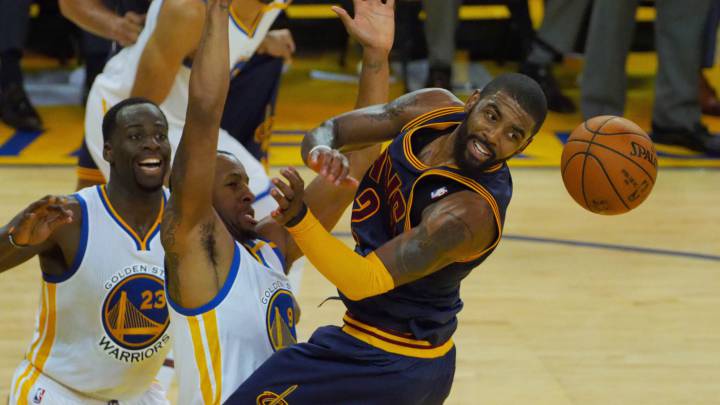 LeBron James and the Cleveland Cavalier have come from behind before, so it’s not the end of the world they lost 113-91 in the Game 1 of the NBA Finals to the Golden State Warriors.

They can easily dig themselves out since all their mistakes are ones they can fix easily. Remember, history shows that losers of the first game have gone on to win four of the past six NBA Finals, including the Cavaliers. They even lost the first two games to the Warriors and still pulled it out.

Tyronn Lue has a new No. 1 priority for LeBron James and his Cleveland Cavaliers in Game 2 of the NBA Finals: Stop the ball. First and foremost, then make sure Golden State’s sharpshooters have a hand in their face.

Translation: Do anything and everything possible to stop Kevin Durant from driving through the paint and dunking at will with nobody even around him.

That’s the plan for the defending champions Sunday night and will be key if they want to even the best-of-seven series and look respectable after the Warriors whipped them 113-91 Thursday night.

Durant scored 38 points and dunked easily, six times in the first half alone and many of which he went untouched to the rim.

“We can’t let Durant get easy baskets like that,” Lue said as his team practiced at Warriors headquarters amid a media frenzy. “With him being probably one of the best scorers in the NBA, you can’t give guys like that easy opportunities at the basket.”

Taking care of the ball will be equally important after that became a major problem in the opener for Cleveland, which committed 20 turnovers in an uncharacteristically sloppy game.

The 13-0 Warriors are on a roll and matched a Finals low with only four turnovers, and if Klay Thompson finds his shooting touch at last, it could be another tough day on defense for the Cavs. They want to get physical, contest shots, somehow find a way to get Golden State out of its groove.

“Effort, effort, yep,” Kyrie Irving said matter-of-factly. “And our ability to make sure that when we’re mismatched in transition, that the only thing that matters is stopping the basketball and settling down in the half court, then we match up from there.”

Durant and Curry combined for 66 points and 18 assists, moving the Warriors three straight wins from becoming the first team to go unbeaten on the way to a title.

Not that they’re discussing it. While Cleveland searches for the right adjustments, Golden State’s roster of perfectionists believes it can play far better still with KD and Steph leading the way, or any of the others who are capable of getting hot in a hurry.

“It’s going to be a wrestling match down there, and you have to keep it going and make it tough for them and just try to wear them out,” said Cavs center Tristan Thompson, held scoreless in the opener.

The Warriors are plenty confident even if Cleveland closes out on the perimeter. Both teams were slow getting started offensively after long layoffs: nine days for Golden State, six for the Cavs.

Cleveland shot 11 for 31 from long range and the Warriors 12 of 33. But Golden State hit 9 for 20 from deep in the second half on the way to 106 total shots – a jaw-dropping 20 more than the Cavs – while attacking at every chance when Cleveland just couldn’t keep up with Steph and KD.

Draymond Green loved watching Durant do his thing with ease down the middle in his first Finals game for Golden State.

James, in his seventh straight Finals, has a remarkable run of having won at least one game on the road in 29 straight postseason series. On Sunday, King James will try to make it 30.

“We had a lot of unforced turnovers. Some of them were from aggression,” James said. “I had two charges, that’s aggression. I can take those. But also had some when I got caught in the air and tried to make some skip passes and they were able to pick them off. Those are like pick sixes. That’s like throwing the ball to Deion Sanders. Most of the time it’s going to be a touchdown going the other way.”