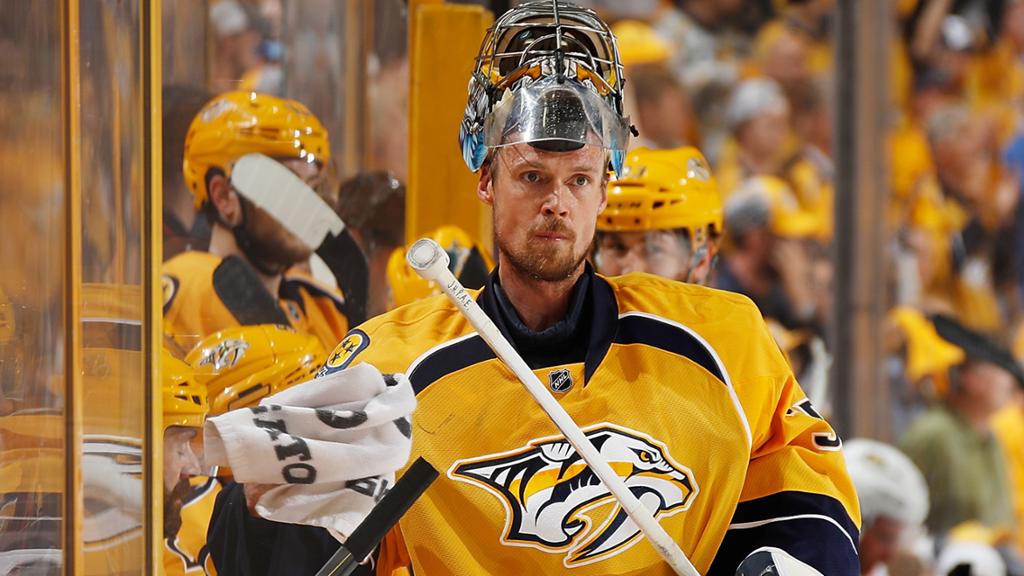 The Nashville Predators proved to critics that Pekka Rinne wasn’t the cause of their Stanley Cup Finals losses to the Pittsburgh Penguins with a 5-1 win.

What both Rinne and the Predators proved is that they are very hard to beat on their own ice this postseason, and now they have added their biggest piece of franchise history yet.

A victory in the Stanley Cup Final.

The embattled Rinne not only started, but he also made 27 saves. Roman Josi and Frederick Gaudreau scored 42 seconds apart in the second period, and the Predators beat the Pittsburgh Penguins 5-1 Saturday night to pull within 2-1 in the best-of-seven series.

The Predators capped the biggest party in Nashville history with a victory that gave thousands of fans inside and outside of the arena reason to celebrate with even country star Keith Urban and wife, actress Nicole Kidman, high-fiving.

And credit Rinne for coming through with a very stingy performance and improving to 8-1 in Nashville this postseason.

The Predators call the 6-foot-5 Finn their backbone, yet critics wanted him benched after looking so shaky in the first two games in Pittsburgh giving up eight goals on just 36 shots. Coach Peter Laviolette benched him in the third period of Game 2 when Rinne gave up three goals in the first 3:28 of a 4-1 loss.

Josi also had two assists. James Neal, Craig Smith and Mattias Ekholm also scored for Nashville as the Predators worked out some frustration against the Pens.

“Like our team has done the whole playoffs against Chicago, St. Louis, Anaheim, we showed really good composure,” said Nashville defenseman P.K. Subban, who had predicted a win in Game 3. “We’re going to take that into the next game.”

“I thought we gave them a couple of freebies where we didn’t force them to have to work for it and that’s an area we’ve got to be better moving forward,” Pittsburgh coach Mike Sullivan said. “We’re disappointed we didn’t get the result, but we also understand that this is a series. Our guys, they’ve been through this. They can draw on their experience. We’re not going to let this certainly get us down. We’re going to learn from it, move by it and get ready for the next game.”

Jake Guentzel scored his 13th goal this postseason and fourth of this series for Pittsburgh and now is one off Dino Ciccarelli’s rookie record of 14 in 1981 for Minnesota. Guentzel, already with two game-winning goals in the series, put the Penguins up 1-0 on their second shot with a wrister off a rebound of Ian Cole that beat Rinne just 2:46 into the game.

Rinne stopped the next 26 shots for the victory and the party continued into the night.

Laviolette stuck with Rinne after lots of questions about his goalie, though he did sit veterans Cody McLeod and Vern Fiddler to get more speed with Harry Zolnierczyk and P.A. Parenteau. Pittsburgh forward Carl Hagelin played for the first time with center Nick Bonino out after taking a Subban slap shot off his left foot in Game 2 that left him on crutches and in a walking boot.

Matt Murray extended his scoreless streak to 72:54 with the Pittsburgh goalie looking ready to notch his 21st playoff win. Then he gave up five goals in the span of 15 shots.

The Predators got it started with a three-goal flurry in the second.

Josi scored his sixth goal off a slap shot at 5:51 , tying it at 1-1 and finally giving nervous fans something to enjoy. Then Gaudreau, who scored his first career NHL goal in Game 1, scored 42 seconds later to put Nashville ahead with his wrister from the high slot , taking advantage of a screen by Penguins defenseman Ian Cole to beat Murray glove-side.

Just after that go-ahead goal, the Penguins had a rush on Rinne, and the three-time Vezina Trophy finalist made back-to-back big saves. First, he stopped Phil Kessel’s wrister from the right circle. The rebound bounced back into the slot, and Rinne made a save on Chris Kunitz with an assist from Subban sliding over to help.

Neal made it 3-1 with 22.6 seconds left in the second, banking the puck off Murray’s left arm for his first goal in the series and sixth of the playoffs. Smith’s goal on a breakaway at 4:54 was his first of the playoffs, and Ekholm padded the lead with a power-play goal with 6:50 left.

“We played some good hockey in those first two games, just a couple little breakdowns and they jumped all over us and it was in the back of the net,” Neal said. “It was a good job of limiting that tonight.”

As for Rinne, Neal added: “We felt we left him out to dry a few times in the last game. I thought we did a better job tonight.”

Notes: Smith is the 18th different Nashville player to score a goal this postseason. … The Penguins went 0 of 3 on the power play and now are 1 of 13 in this series. … With an assist, Sidney Crosby now has 160 career playoff points (56 goals, 104 assists) and tied Mike Bossy, Gordie Howe, Bobby Smith and Al MacInnis for 20th all-time.