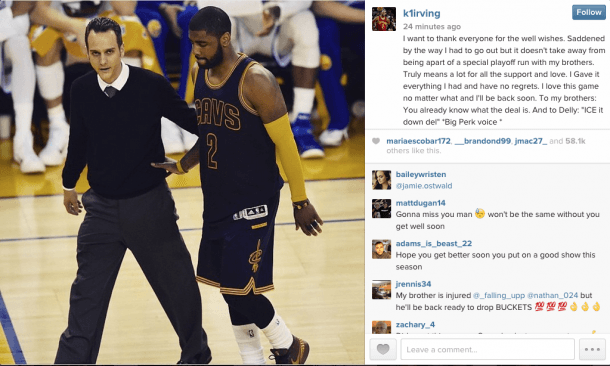 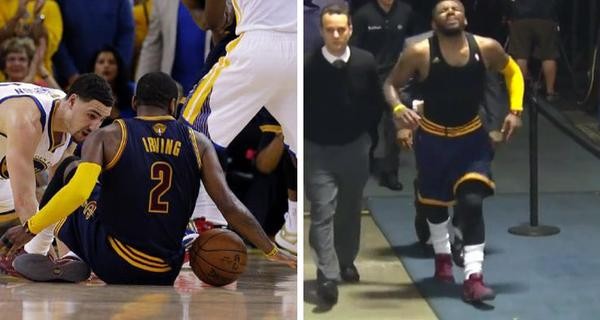 The Cleveland Cavaliers have persevered through one major injury in the 2015 post-season. Early in the playoffs, Kevin Love suffered a shoulder injury, one that took him out of the current NBA playoffs. While the Cavs were still able to win their conference without Love, it’s hard to picture Cleveland winning the 2015 NBA Finals both without him and without guard Kyrie Irving.

According to news on Friday, the latter is a player whose 2015 season is now over:

The @cavs @KyrieIrving has a fractured left knee cap, needs surgery and is out of #TheFinals. http://t.co/DrTVOWO8Gd pic.twitter.com/2CdrCjyqEz

The injury, clearly terrible as far as Cleveland’s chances to win the NBA title go, has made the 2015 NBA Finals a lot less interesting. Irving, who was Cleveland’s No. 2 punch on offense, averaged 19 points per game during the 2015 playoffs. Without that offensive help, Lebron James appears as though he will be relied on even more than he already is.

The Cavaliers were considered underdogs prior to the start of game one of the 2015 NBA Finals. Following the loss in game one, they were considered even larger underdogs as Cleveland missed a chance to steal home court advantage in the series when they missed two late shots at the end of regulation on Thursday. With Irving out, the Cavs are now priced as long as +400 (bet365) to win the 2015 NBA championship, an award that appears more-and-more to be heading Golden State’s way.

Matthew Dellavedova, averaging 6.5 points per game, has played important minutes during the 2015 post-season. He’s one player that will need to establish himself more on the offensive end to make up for Irving’s absence.

“You all saw he played terrifically,” Cavs coach David Blatt said Friday. “Matty has been a rotation player for us the whole year. He stepped in and did a great job, and the team believes in him and we believe in him. If necessary, he has to play significant minutes again, he’ll be ready, and we’ll know how to play with him.”

Earlier on Friday as the team waited for the official word on point guard Kyrie Irving and whether his left knee injury would keep him out of action in Game 2 on Sunday, and perhaps beyond, coach David Blatt told the media that he was not optimistic about the situation.

“Not good,” he said when asked about Irving’s status after he re-injured the left knee that has ailed him in recent weeks. “I don’t know that for a fact because the result hasn’t come back, but my feeling is not good.” 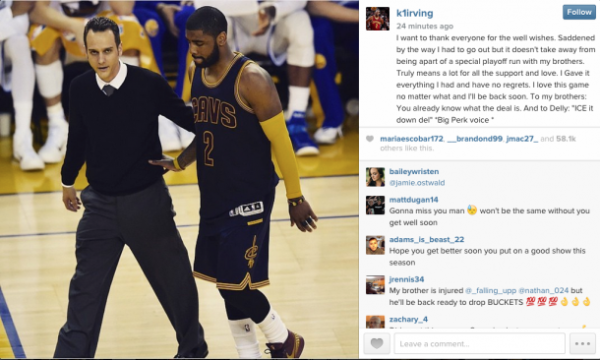 However elevating one’s game is not as simple as just deciding to do it. Golden State are now in a position to lock down defensively on James without having to worry as much about kickouts.

“There are a few things that you would love to have going late in the season. That’s being healthy, having a great rhythm, and then you need a little luck as well,” Cavs starLeBron James said.

Cleveland will probably still be tough from home but, in need of a road-win, much appears to be hinging on game two which goes Sunday night.