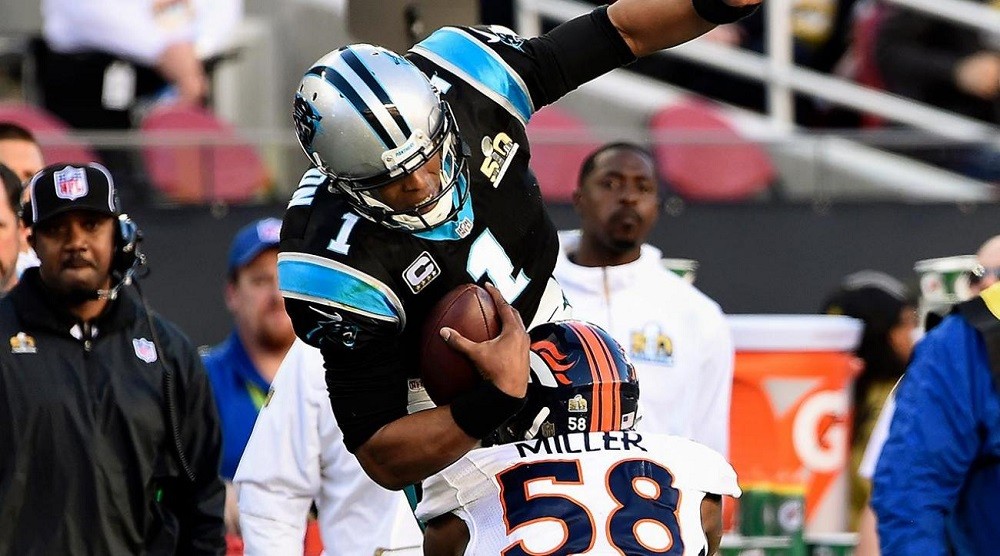 Denver Broncos fans can now say that beating the Carolina Panthers in the Super Bowl was no fluke, as they champions did it all over again in Game 1. Cam Newton took a hard pounding, so there was no time for a temper tantrum this time around.

Cam Newton will get a few extra days to recover from his latest beating by Von Miller and crew. At least he won’t have to seethe for seven months.

Denver’s dominant defense came up big against Newton again and the Broncos escaped with a 21-20 victory over the Carolina Panthers Thursday night when Graham Gano missed a 50-yard field goal with 4 seconds remaining.

The Broncos collected three sacks and hit Newton eight more times, not counting the abuse he took on his 11 runs.

“We wanted to make sure we got to him,” safety T.J. Ward said. “Every time he ran we tried to put helmet and shoulder pads on him. If you’re not going to slide we’re going to put something on you. We saw him limping throughout the game so that running stuff; you can’t do that all game.”

Three of the hits were of the helmet-to-helmet variety, but none resulted in any penalty yardage.

Miller hit him high when DeMarcus Ware was taking him down; linebacker Brandon Marshall hit him in the face just as he released a pass and safety Darian Stewart leveled him in the final minute, but because Newton was whistled for intentional grounding on the play, the penalties were offsetting.

“It’s not my job to question the officials,” Newton said after finally emerging from the trainer’s room. “I really like this officiating crew, so it wasn’t something I know they did intentionally. But it’s not fun getting hit in the head.”

A wobbled Newton appeared to have done just enough to get a measure of revenge for that bludgeoning in Super Bowl 50 when Miller stripped the ball and the Lombardi Trophy from his grasp.

Newton put the Panthers on the cusp of victory with a 16-yard pass to Kelvin Benjamin at the Denver 37 in the closing seconds, and another short pass to Ted Ginn Jr. put Gano well within his range.

“I was going to drill it, no doubt in my mind,” Gano said. “But this happens. It’s not going to define my season.”

Just as he did over and over in the Super Bowl, Miller made a big play late, sweeping past right tackle Mike Remmers and sacking Newton at the 2-minute warning. A penalty on fourth-and-21, however, kept the Carolina drive alive until Newton retreated to the sideline when Gano came in for the potential game-winner.

His miss only piled on the pain for Newton, who stayed on one knee in disbelief as the stadium rocked and Trevor Siemian trotted out for one victory formation snap and a win in his first NFL start.

“We’ve got a heck of a team, a resilient team, I think you saw that tonight,” said Peyton Manning‘s successor, who finished 18 of 26 for 178 yards with one TD, two interceptions and two sacks.

The Panthers took a 17-7 led into the fourth quarter of the first Super Bowl rematch to start a season since 1970, but Siemian hit running back C.J. Anderson for a 25-yard touchdown on the next snap.

Newton’s next pass was intercepted by Harris at the Carolina 23. Ten plays later, Anderson bulled his way in from the 1 to give Denver its first lead at 21-17 with 9:26 remaining.

After Gano’s 36-yard field goal brought the Panthers to 21-20, Carolina forced a three-and-out and got the ball back at its 40 with 3:06 remaining. 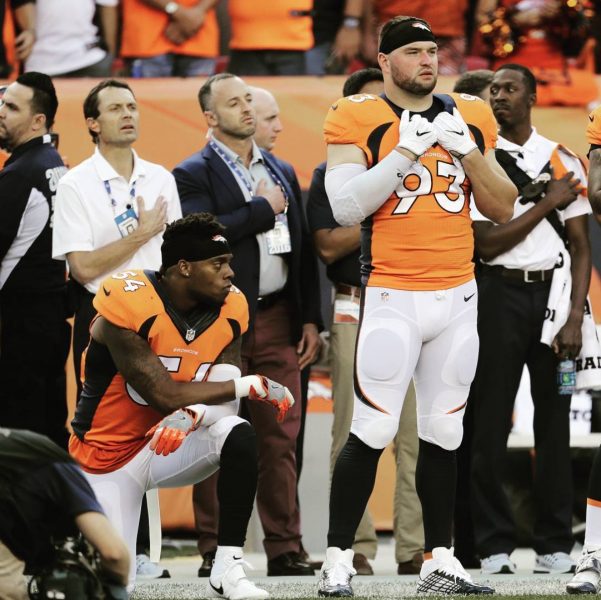 TAKE A KNEE: Broncos linebacker Brandon Marshall, a college teammate of Colin Kaepernick, kneeled during the playing of the national anthem. Kaepernick refused to stand for the anthem during San Francisco’s preseason games, explaining it was to protest racial oppression and police brutality in the United States. “I’m not against the military, I’m not against America,” Marshall said. “I’m against social injustice.”

OLD TIMES: Manning made his first appearance at Mile High as a retiree, walking through the tunnel with the Lombardi Trophy. Manning said he spoke with Siemian on the eve of the game and told him he was in his corner.

POACHING PANTHERS: Carolina led the league with 39 takeaways last season and had three in the opener, including two on Denver’s first two drives. Shaq Thompson recovered rookie Devontae Booker’s fumble at the Carolina 29, and Bene Benwikere intercepted Siemian’s pass at the Panthers’ 10.

FIELD FLIP: Punter Andy Lee, who surrendered a Super Bowl-record 61-yard punt return to Jordan Norwood in February, pinned the Broncos back with a franchise-record 76-yard punt in the third quarter. His next punt traveled 61 yards.

FULLBACK FUN: Rookie Andy Janovich was brought in to bore holes for Anderson, but he surprised the Panthers with a 28-yard TD run after Denver’s first two drives ended in turnovers.