Home All News Opinion Buying Into Something Never Bought: Amazon and Fake Reviews 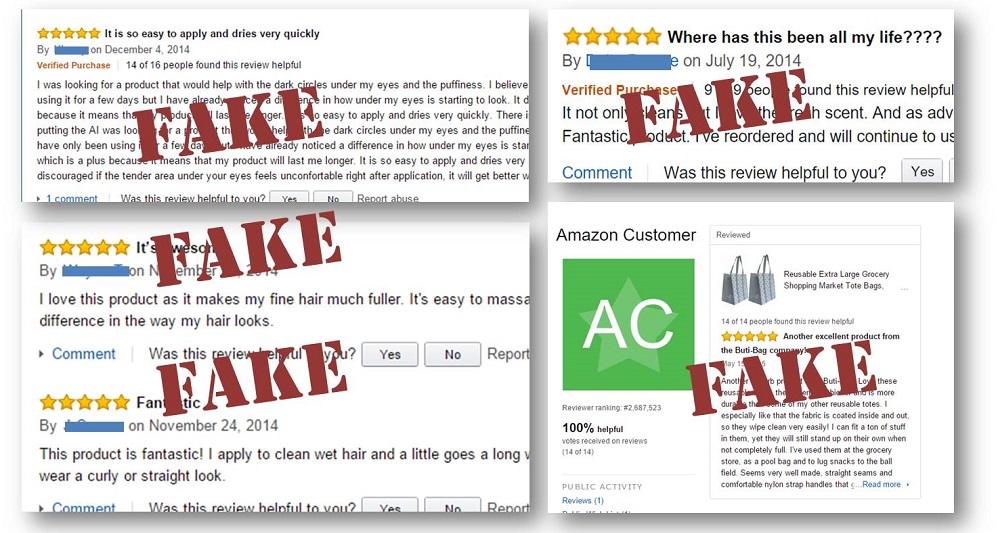 There are certain perils when purchasing items online, especially if you have no idea what they’re like in person, for lack of a better term. If you want say, a blender and you can’t be bothered to go outside and buy one, there’s always Amazon and several other online stores. You search for the term blender, and you’ll see pages and pages of blenders from various manufacturers and distributors, in all shapes and sizes. After narrowing things down and seeing something you like, you yourself have no idea what it’s really like.  Other people who own it do. Other people kind enough to share their opinions in reviews to either endorse the product or curse it, so its curse won’t befall any more hapless buyers.

That’s what reviews are for. Is the product yay, bae or nay? In a perfect world, it’s a good system to determine what product to buy. Do we spend more for quality or do we compromise quality to spend less? Once in a while, there are gems that are both good and costs less. But it’s not a perfect world. Its dog eat dog and the dogs are the products clawing their way up the top of Amazon’s charts through incentivized reviews. In a perfect world, I purchase a coffee maker I saw online, take a leap of faith; it turns out sturdy and brews coffee like a dream. I’m so happy and buzzed that I go online and post a good review to recommend the coffee maker, feeling pleased with myself that someone will thank me someday. But it’s not a perfect world. The thing arrives partially broken but works then brews some jockstrap espresso all because I believed a couple hundred paid douches who posted four-star reviews,  ten deviants who actually like the swamp brew versus 2 guys who had the same experience as I did.

There’s a lot of that going around on Amazon and makes it much difficult to actually purchase unfamiliar stuff. No problem with stuff you already know about. You go to a mall, you see the product, you touch it, you even test it and make note to purchase it later online when you get the green. But it’s stuff as described above that’s keeping online shopping from reaching its full potential. There’s just as much junk online as there is in the real world, and they’re getting sold thanks to fake positive reviews. Sometimes it’s the other way around. Paid reviews can be negative against competing products, and people are even paid to make positive reviews for one product while bashing another.

Amazon promised that the practice would end soon, or at least minimized and going so far as to threaten to sue people who make false reviews through micro-tasking sites like Fiverr or Freelancer. They also said that they will erase reviews they analyzed as false or incentivized. As of this week, Amazon has deleted over 500,000 false reviews and counting. As per ReviewMeta, 71 percent of those reviews were incentivized, and the rest were outright false or collateral damage. The effort seems to be working as many highly rated products have dropped.

Fake reviews can be quite dangerous especially when faulty products are involved is the case of Samsung’s Galaxy Note 7 for example, as well as their exploding washing machines. But let’s give credit to Samsung as their flagship electronics are great outside the Galaxy Note 7 and their budget units. That’s as per experience using them as I haven’t actually bought one from Amazon. Now other faulty appliances like blenders and coffee makers could suddenly break apart during use or overheat and catch fire if left plugged because people bought them after reading positive reviews of those who never really bought nor used them.

Whether or not Amazon realizes the safety value of removing false reviews, another prime motivator is reputation, as any self-respecting business owner would not want to be the source of utter junk. Through Amazon’s published discouragement, paid reviewers are thinking twice and posted false reviews are getting removed. It’s not going to stop them though; there will be resurgences soon enough especially as the holidays approach. Newly-posted false reviews can still influence holiday shoppers. Now it’s rude to complain without making suggestions, so here’s one.

As a start, Amazon can make sure that the only ones that can review products are those that actually bought them. For every item they distribute, they can slap on some barcode that uniquely identifies every single item much like a mac address or software key. Opinionated buyers can then scan those codes with their phones or enter them manually and key in their good or bad reviews of a product. They can do so willingly or get properly incentivized through a point reward system. Sounds like a plan? Just our two cents if they haven’t thought of it already.