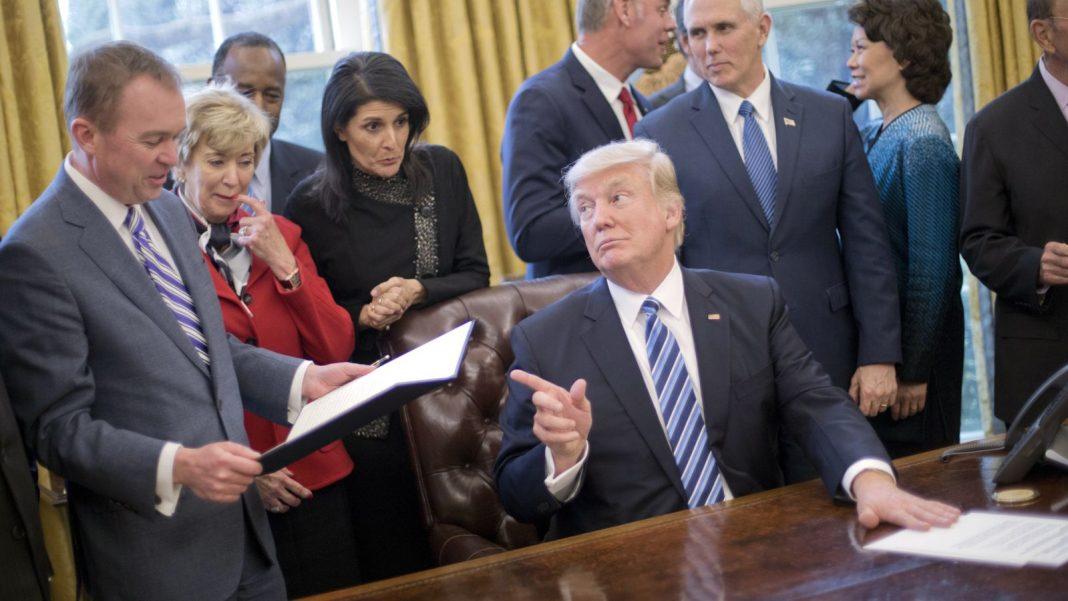 UPDATE: One of the biggest glaring errors found in Donald Trump‘s new budget plan is an assumption that there will be a $2 trillion increase in revenue from economic growth even with those tax cuts. If you remember the president said the magic of his tax cuts is that they will pay for those tax cuts. 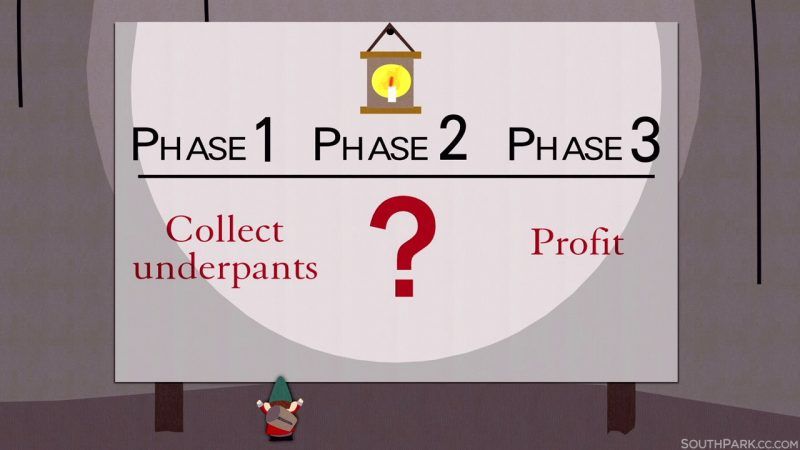 For South Park fans, you might recall the episode of the underpants gnomes where they had a surefire money making plan. The image above will sound rather familiar to Trump’s magic budget plan.

Phase 1, collect underpants, then skip to Phase 3 which is just profit.

Harwood asks Mnuchin about double-counting gimmick: "This is a preliminary document that will be refined" #FiscalSummit

Treasury Secretary Steve Mnuchin’s explanation of this wasn’t too exact. He said they’ll fix it later.

President Donald Trump’s put out his proposed $4.1 trillion federal spending plan, but like his earlier blueprint version, there areome problems. Economists have pointed out that it fails to account for the costs of tax cuts and some of its other policy proposals.

It’s always a head-scratcher that Republicans are the party known for budget watching and keeping the U.S. deficit from getting out of control, but yet, they seem to be the party that drives it right off the cliff when in office. This is definitely the case with Trump’s latest attempt as it fails to account for the loss of trillions of dollars in revenue that comes from the tax cuts it proposes.

DC budget commentary loves to say plague on both your houses. But the unreality/gimmicks in this budget are an unprecedented, epic scale.

Former Treasury Secretary Larry Summers wrote in The Washington Post that it “would justify failing a student in an introductory economics course.”

The biggest issues seems to be that the president’s budget fails to use dynamic scoring which captures how policy changes will affect future revenues. It’s like when we do a household budget and think about what we might have to scrimp on if we want to get that killer 4K television.

In the budget, the administration forecasts healthy economic growth in the years ahead—specifically, that the economy will grow at a rate of three percent annually in many of the coming years (more on that rosy number later). Why do they think the economy will grow so much? Because, as the budget says, “a comprehensive overhaul to our tax code will boost economic growth and investment”—a reference to Trump’s proposal to lower the tax rate for corporations from 35 percent to 15 percent, and to decrease the top income tax rate from 39.6 percent to 35 percent.

But here’s the catch: The budget then goes on to predict that that growth will, in turn, create $2 trillion in additional revenue. Except for one thing: The administration appears to have neglected to account for the lower tax rates in calculating the revenues. 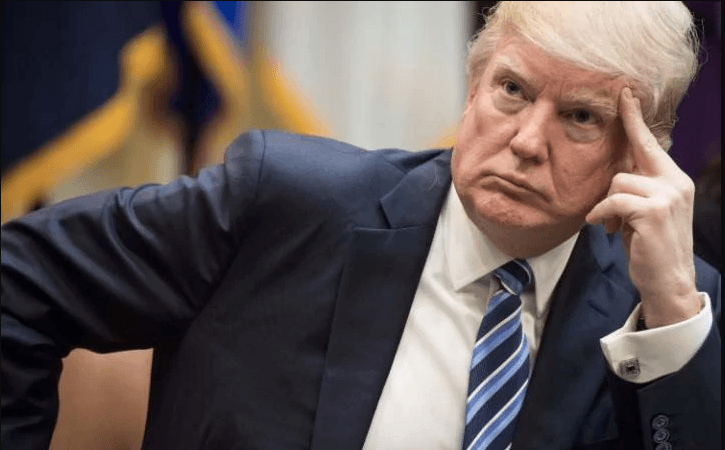 Here’s a breakdown of how Trump’s new budget would affect individual government agencies.

Up or down? Down 5 percent

Highlight: The proposed budget would limit subsidies to farmers, including a cut in government help for purchasing crop insurance. Crop insurance is an overwhelmingly popular program with farm-state senators in both parties, and previous farm bills have only increased spending. The budget would also limit spending on environmentally friendly conservation programs and some rural development dollars that help small towns build infrastructure.

Highlight: The budget would eliminate three economic development agencies and several grant programs aimed at preserving the environment and dealing with climate change. The Minority Business Development Agency, the Economic Development Administration and the Manufacturing Extension Partnership would be eliminated.

Highlight: The Pentagon’s proposed 2018 budget would fund increases of almost 43,000 in the size of the active duty military and 13,000 in the Reserves. It provides troops a 2.1 percent pay raise, adds F/A-18 fighter jets and seeks a new round of base closures, which Congress routinely rejects. It also increases the amount of money used for training Afghan forces and conducting counterterror operations in Afghanistan. The budget includes $64.6 billion for military operations in Iraq, Syria, Afghanistan and Africa.

Highlight: Trump’s budget would hike spending for the National Nuclear Security Administration, which is responsible for maintaining the nuclear stockpile, while cutting other energy spending. The budget seeks $120 million to revive the mothballed Yucca Mountain nuclear waste repository, which is hugely unpopular in Nevada and was largely stopped by the efforts of former Democratic Sen. Harry Reid.

The budget also slashes $700 million from an Energy Department office that promotes energy efficiency and renewable energy and eliminates the Office of Science and the Advanced Research Projects Agency-Energy (ARPA-E), which supports research into new energy technologies.

Highlight: The budget cuts EPA by nearly one-third, eliminating more than 3,800 jobs while imposing dramatic cuts to clean air and water programs. Adjusted for inflation, the proposed budget would represent the nation’s lowest funding for environmental protection since the mid-1970s. The Superfund pollution cleanup program would be cut by $330 million, to $762 million.

Highlight: The budget initiates deep cuts to health insurance programs for people with modest incomes, including coverage for children. Those cuts would go beyond the House GOP bill that repeals much of the Affordable Care Act, also known as “Obamacare,” and limits future federal financing for Medicaid.

Highlight: The budget asks Congress for $2.6 billion for border security that would include a down payment for Trump’s long-promised wall and increased technology along the U.S.-Mexican border. The budget calls for $314 million to hire 500 new Border Patrol agents and 1,000 agents for Immigration and Customs Enforcement. It also requests a $1.5 billion increase for ICE to arrest, detain and deport immigrants in the country illegally. The plan also proposes cutting about $667 million in grants administered by the Federal Emergency Management Agency. That includes proposed cuts to the Urban Area Security Initiative and eliminating the Transportation Security Administration’s law enforcement grants.

Highlight: The budget calls for opening Alaska’s Arctic National Wildlife Refuge to oil and gas drilling, where it is now prohibited, while eliminating offshore oil revenues used by Gulf Coast states to restore disappearing shorelines. Arctic drilling, a contentious issue that would require congressional approval, would generate an estimated $400 million a year in tax revenues by 2022, according to the White House. Elimination of revenue-sharing to the four Gulf Coast states – Alabama, Louisiana, Mississippi and Texas – would generate $1.6 billion over the next five years, the document says. The proposal also includes money for seismic surveys to provide data for possible offshore drilling in the Atlantic Ocean where it is now barred.

Highlight: The budget adds $26 million for 300 new assistant U.S. attorneys to fight gangs, violent crime and illegal immigration. Attorney General Jeff Sessions has identified those areas as his top priorities. The plan calls for 230 of these prosecutors to be stationed in yet-to-be-named cities deemed hot spots for violence.

Another 70 will be assigned to border states, focusing on those who enter and re-enter the country illegally after deportation, as well as document fraud, human smuggling, drug trafficking and other immigration-related offenses.

Highlight: Trump is proposing cuts in job training programs including $434 million for the Senior Community Service Employment Program, $238 million by closing Job Corps centers, and $68 million for the Bureau of International Labor Affairs. He is proposing $90 million more for apprenticeships that result in jobs and a parental leave program of six weeks.

Highlight: The budget proposes a $4.3 billion increase in discretionary spending, mostly to pay for medical care at more than 1,200 VA facilities nationwide serving about 9 million enrolled veterans. That’s a 5.8 percent increase as the Department of Veterans Affairs expands its network to include more private health providers. The budget also calls for $2.9 billion in mandatory budget authority for 2018 and $3.5 billion in 2019 to pay for expansion of the Veterans Choice private-sector program. To help pay for rising costs from that program, the VA would cap the amount of educational benefits veterans receive under the GI bill to roughly $21,000 a year and halt “individual unemployability” benefit payments to out-of-work disabled veterans once they reach retirement age.