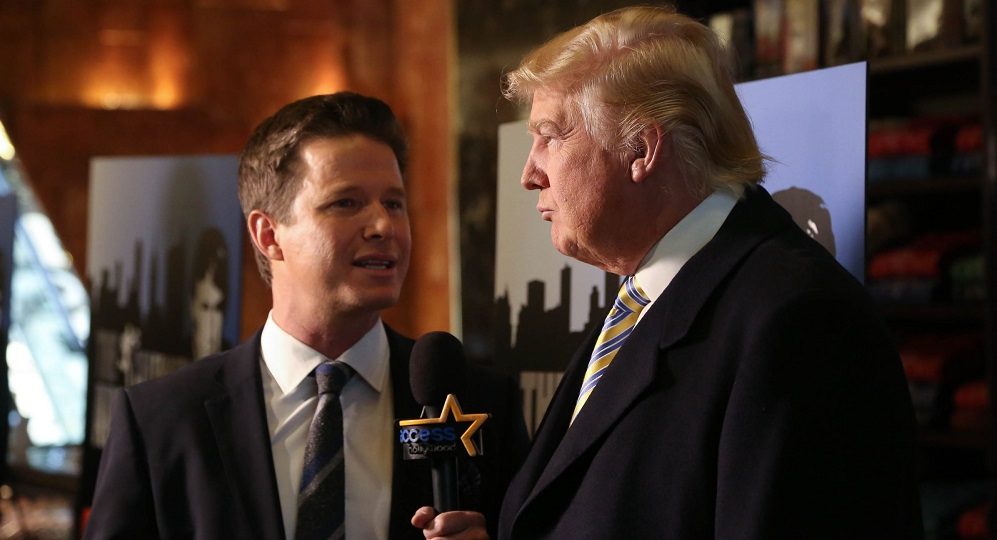 Billy Bush is no longer on just a mini vacation from NBC’s “Today” show, he’s officially been suspended according to executives who are in charge of the morning news show.

Billy Bush spent the weekend preparing a big apology on Monday’s “Today” show, but that was all for naught as an NBC News spokesperson confirmed Sunday that he won’t be returning. Many ‘sources are saying that he won’t be back for the entire week if at all after the Donald Trump video that leaked kept growing all weekend.

“The plan is for him to have a chance to apologize,” an NBC source said earlier Sunday, but things have quickly changed.

“NBC News did exactly what you would expect from a great news organization,” an NBC spokesperson said in a statement issued Sunday afternoon. “As soon as we saw the tape and made the assessment it was undoubtedly newsworthy, we moved quickly and deliberately to get it published and to do so in the most responsible way.”

Bush has already rubbed some people the wrong way at the Today show, say sources, including Al Roker, with whom Bush clashed on air over Bush’s handling of the Ryan Lochte interview. One source described him as “unliked” even before the Trump tape. There is ample proof on social media that Bush’s objectifying conversation with Trump has outraged many women — the show’s core viewer constituency.

Bush’s Facebook page is currently filled with critical comments from women. According to The New York Times, a call to his office went to a voicemail message recorded by an assistant saying, “You’ve reached Billy Bush’s office. He’s busy making America great again.”

If @NBC keeps Billy Bush, a cheerleader for sexual assault, on air, @TODAYshow is done for a generation. https://t.co/0LQRnaeNXf

NBC has great journalists. I wish it would empower them, rather than celebrity interviewers and sexual assault apologists like Billy Bush. https://t.co/EnicPzQPWF

Just like Donald Trump is being watched in Sunday’s debate to see how he responds to a recently surfaced videotape of a crude conversation about women, NBC “Today” show personality Billy Bush will likely have some explaining to do when he resurfaces on the air.

When that will be isn’t clear. An NBC News spokesman said Sunday Bush will not appear Monday as host of the “Today” third hour at 9 a.m., a job he’s held for two months. No further details were provided.

The 2005 tape was made when Bush worked on the entertainment news show “Access Hollywood” as he rode with Trump to the set of a daytime drama where Trump made a cameo appearance. In the tape, the Republican presidential candidate brags about kissing, groping and trying to have sex with women who were not his wife. Bush joins in, laughing at some of Trump’s comments and later encouraging an actress to hug Trump.

Bush, 44, has been brutalized on his own Facebook page since the tape surfaced. Hundreds of hostile comments were attached to Bush’s last posting on Friday – of him distributing a plate of bacon to “Today” viewers outside of the show’s studio. “You are sickening!” one woman wrote, in a comment that nearly 5,000 had “liked” through Sunday afternoon.

Angering women viewers of a show as important to NBC’s bottom line as “Today” is no small matter. Many viewers upset by 2012’s messy dumping of Ann Curry as “Today” host took it out on colleague Matt Lauer; the show’s ratings still haven’t recovered. Women make up the majority of “Today” viewers, particularly in the last two hours.

Even before this incident, Bush had a rocky start. He was the reporter to whom American swimmer Ryan Lochte lied about being robbed at the Olympics. When Bush later tried to defend Lochte on “Today,” he was dressed down by colleague Al Roker.

The “Access Hollywood” tape was an embarrassment on multiple levels for NBC News. The news division for days had been aware of the tape from the NBC-owned entertainment show but was scooped by The Washington Post on Friday when the newspaper was tipped off about its existence and got a story out within hours.

Bush issued a statement on Friday apologizing for his actions.

The tape showed Bush and Trump speaking as the Republican was about to appear on the daytime drama “Days of Our Lives.” From the bus they had ridden to the set, Bush pointed out to Trump an actress, Arianne Zucker, who was there to greet them.

“I’ve gotta use some Tic Tacs, just in case I start kissing her,” Trump said. “You know, I’m automatically attracted to beautiful … I just start kissing them. It’s like a magnet. Just kiss. I don’t even wait. And when you’re a star, they let you do it. You can do anything.”

“Grab them by the p—-. You can do anything,” Trump added.

After getting off the bus, Bush asks the actress to hug Trump, then added, “How about a little hug for the Bushy?”

The married father of three is the nephew of former President George H.W. Bush.