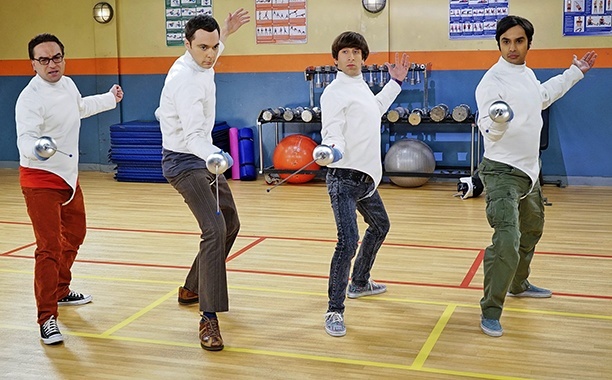 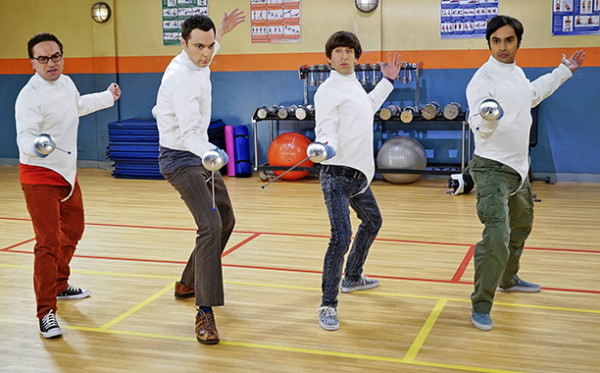 It’s all about fencing and ‘stalky talk’ on this episode of “The Big Bang Theory,” as Leonard, Raj and Sheldon went to Howard’s office so they could all go to lunch together. Howard told the other guys that Bernadette had gotten him a FitBit to see how much he exercised. Sheldon said thinking about exercising without doing it had health benefits and Leonard said maybe they should all exercise more.

Penny said it was great the guys wanted to exercise more but said Leonard twisted his ankle playing Scrabble, so sports weren’t the best way for him to get exercise. Stuart asked Amy, Bernadette and Penny to come to the comic book store to ask them how to get more women shopping there. Amy said rethinking the artwork would help because the artwork he had hanging up was offensive to women. She also told him to advertise directly to women.

Howard, Raj and Leonard joined their co-worker Barry’s Fencing Club and went to the gym to participate in it. Barry came in to teach them fencing and said he hoped they didn’t think it would be like what they see in Star Wars. He showed them basic fencing positions. While they were practicing Leonard let it slip that Sheldon and Amy broke up. Leonard said Amy deserved to be happy, and Sheldon slapped him with the fencing glove he was wearing. Leonard then told Barry asking Amy out would be a bad idea and Sheldon said he was going to stop it by challenging Barry to a duel in three years’ time.

Stuart said he knew he was the reason women weren’t coming into the store. He said he wasn’t nervous in front of Penny and the girls because he was picturing them naked. He went on to say that the longer he was single, the lonelier he got. Amy said she understood because she was alone for a long time before she met Sheldon.

After Fencing Club, Sheldon, Howard, Raj and Leonard went to a sports bar at Sheldon’s request. He said they were athletes now and that he also belonged in a bar because he was having a problem with women. Raj and Howard encouraged Sheldon to find someone else to date. Then he saw a woman in the bar and said he would make her his girlfriend. Sheldon said ladies love jocks and approached a table of three women to tell them he had been broken up with and needed a date with someone else. Two of the women rejected Sheldon, and he rejected the third woman (a redhead with very light skin).

Amy said turning down a date with Stuart was not something she was used to, and Bernadette said sometimes dates get turned down. Then Amy got a text from Barry asking her on a date. She said she was hoping the next person she would date would be less like Sheldon, but Barry is a lot like him.

Sheldon said he smelled funny and tasted salty. He ran into Amy in the hallway of his apartment building, and she asked him how his day was. Sheldon told Amy that Barry had expressed interest in asking her out on a date and Amy told him that Barry already had. Amy told Sheldon she turned Barry down for a date and Sheldon said that he asked two women out and got turned down. Sheldon told Amy he had been told going on a date with someone else would help him move on.

Bernadette asked Howard why his FitBit said he had run 174 miles the day before.