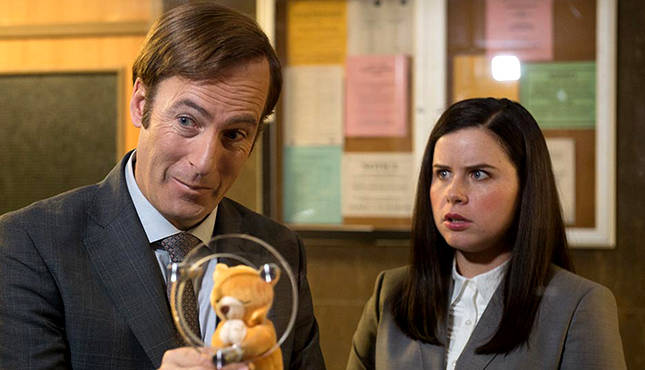 For this episode of “Better Call Saul” called Rebecca, it’s starts with a wow. Chuck McGill actually found a woman who agreed to marry him back in the day as we get a look at a flashback in the open. The dinner with Jimmy at his home was a bit awkward for the stuffy older brother, but his wife enjoyed the plethora of lawyer jokes Jimmy had locked and loaded.

Chuck had set up a signal for his wife to use if she got annoyed with Jimmy, but Chuck ended up using the signal himself. The wife thought Jimmy was great, and we see how stiff Chuck is when his lawyer joke falls flat with her.

When you have an employee that is a loose cannon you can either fire him or get a babysitter for him. Cliff chose the latter, and now Jimmy has a crazy, 100 percent by-the-book handler named Erin. She’s going to make sure Jimmy’s papers are in order and that he follows each and every rule at Davis and Main.

This will kill Jimmy!

The hardest working lawyer in New Mexico is Kim Wexler. She is on a serious grind to get out of the dungeon where her job now entails using a highlighter for 16 hours a day.

Jimmy’s bright idea is for her to sue the pants off HHM. Career suicide she says and tells him she does not need him to save her anyway.

Not only is she putting in more hours than anyone else, but she’s also making calls to bring in a big client that just might get her out of Howard’s doghouse.

Jimmy sees what happened to Mike’s face and mentions “The first rule of Fight Club!” Mike’s not amused as usual.

Jimmy’s not amused either when Erin smacks his efforts down with the court worker as he uses his Beanie Baby bribe. She tells Jimmy there is a process, and they will be going by the rules.

Afterward as Jimmy’s sulking, he sees another lawyer in the bathroom who congratulates him on his new gig at Davis and Main. And talks about how shitty his day has been, complete with vomit on his suit from not one but two clients.

You’d think this would remind Jimmy how good he has it with his new job, but that feeling won’t last long with Erin breathing down his neck.

Finally, Kim lands a meeting with a potential client. A big time banker ends up letting HHM represent him, and Kim assumes she will be working the case. Wrong! Howard’s a dick and sends her back to the cellar to keep on reviewing documents.

She should move on. There has to be another firm with decent people running it. Or at least, leaders that don’t hold a grudge and cut off their nose to spite their face. Who would leave a talent like Kim to do the work of an intern?

Getting the good news of the new client from Howard, Chuck is pleased and assumes Kim will be back in her usual role at the top. Howard says “we’ll see.”

The $250K in billings should make this happen. Even in Chuck’s eyes.

Kim gets to hear Chuck’s take on Jimmy when he shows up super early to the office. Not before Chuck makes the dick move of asking her to make him some coffee after she’s been at the office all night.

Kim wanted to know if she had a future at the firm and Chuck told her the story of his father. Painting a picture of the best person Chuck ever knew. He said he found about $14,000 missing from his dad’s little business when he began helping him with the accounting after college.

He believed Jimmy had taken the money over the years, a little at a time. Says Jimmy can’t help himself. A good warning for Kim to stay away from his brother if she wants a future at all.

Well, we got a look at another blast from the future of Breaking Bad when Mike is visited by Hector Salamanca. He’s Tuco’s uncle and in Breaking Bad he’s unable to speak and wheelchair bound with that damn bell for communicating.

Hector asks Mike to claim the gun Tuco had as his own, so his nephew doesn’t have to spend eight years in jail. Hector says a short stay in prison will be good for him, but not eight years.

Mike is offered $5K for his trouble. Not bad, but Nacho wouldn’t be pleased and also Mike would be in even deeper with these people.

He knows it too as he looks stressed after this little meeting that ruined what would have been a peaceful breakfast all alone.

As we move forward this season and beyond, hopefully, we get to see exactly what happened to Hector to cause him to be an invalid eventually.

This week’s episode didn’t endear me to Jimmy. Seeing how hard he’s made life for Kim shows his major downside. He’s a fun character, but can sure wreck lives.